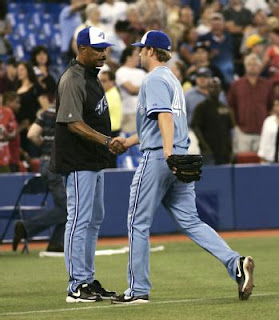 And so it goes for our Toronto Blue Jays, in that even the wins feel like losses. The saying goes that " a win is a win", but what should have been an uneventful ninth turned into a near debacle that would have left even the most diehard of fans shaking their heads. And probably a little nauseous.

In what's becoming a disturbing trend (or is it a new reality?), the Blue Jays bullpen follies continued to torment us in very nearly handing back a 5-1 lead, choking on three Angel runs and leaving the tying run stranded in scoring position. Bad relief pitching I can handle (well, not really, but bear with me here), bad bullpen management I cannot.

About the only positive thing I can say about Cito's use of the pen in the ninth is that he retrieved the ball from Brandon League after three batters. How he hands the ball to Casey Janssen (with de-facto closer Jason Frasor available), who had been getting knocked around by opposing batters to the tune of a .340 clip, is another entirely.

Well, it does make sense to some degree. It makes perfect sense if the team has already shifted into "let's find out what we have for next year" mode. And really, it should come as no surprise that this is where we find ourselves. The writing has been on the wall for weeks.

Travis Snider is going to play every day. Randy Ruiz is getting a shot to stick. The young starters are showcasing their stuff in a late-season audition for the 2010 rotation. And I guess the bullpen needs to sort itself out also. So this is where we are. All of us. Following a team that seems less concerned about winning the remaining games on the schedule than with sorting matters out for 2010.

Among other notes on puppy dogs and ice cream, I wrote this in the comments section today:

"It is funny, though, how many of us - even the great optimists among us - have finally reached the tipping point."

It seems that sentiment is now being shared by Cito and J.P. We're only left to wonder just how far up the Blue Jays food chain the feeling permeates.
Posted by The Ack at 1:31 AM

Email ThisBlogThis!Share to TwitterShare to FacebookShare to Pinterest
Labels: a win is a win, Depressed, fuck 2009

As much as I don't like seeing any other teams from the AL East division winning games, the Red Sox's beating from yesterday's affair with the Yankees makes it all worthwhile, but I'll take the Blue Jay's win.

Don't know who caught this, but from the TSN article on the game:

"The Blue Jays are looking to replace the artificial turf at the Rogers Centre for next season. They're having a sample of the new surface installed on the half-diamond at their spring facility in Dunedin, Fla., to test out how it plays. The new turf should be easier on the players' bodies and allow for quicker transitions at the facility than the current surface. ... "

I recall Beeston making an offhand comment a while back (while on with his buddy the Bobcat) about "trying to get the turf right", so that progress is good news at least. The turf, as is now, is a disgrace.

I'm enjoying the losses as much as the wins anyway. Every loss gets us better picks next year. Please don't write the all to obvious "Only if Toronto can sign it's picks, cuz this year they didn't sign three." I'm getting really tired of that one...

do janssen or tallet have any trade value? get 'em outta here!

Hey Tao, got something for ya.