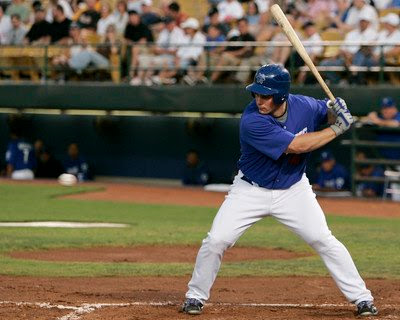 The Blue Jays press, bloggers and fans have all gone emo over the past week, dramatically biting their knuckles, streaking their mascara and pre-publishing obituaries to the team's hopes and dreams of ever contending, next year or even distantly into the future.

Meanwhile, Travis Snider has been smacking the living shit out of the ball.

The 21 year-old Snider, who remains the biggest prize in the Jays system, was named the Pacific Coast League player of the week for last week. In his last five games (July 30-August 3), the GBGPWH scored 15 runs and drove in 13 with three homers, seven doubles and a triple.

For those of you who forgot what hope looks like, it is approximately six feet tall and 235 pounds with number 45 on its back, a wisp of post-pubescent fuzz on its chin and a youthful red glow in its cheeks. And hopefully, it will be patrolling left field at the Rogers Centre before the end of the month.
Posted by Tao of Stieb at 8:00 AM

And then in the double-header last night he only hit 1-4 with an RBI, then 3-3 falling a triple short of the cycle in the night cap. Ruiz and Dopirak had great games as well.

When can they call him up and avoid super 2 status?

Oops. Didn't realize that it was a double-header yesterday.

Nevertheless, the kid is killin' it.

I had thought the Jays were not going to worry about Super 2 status with Snider, but given what's happened this season, they may well keep him down as long as possible.

Also, Brian Dopirak is KILLING IT.

Hey Kevin Millar, Travis Snider called and he said get the hell off the team so he can take your spot on the roster.

There's a certain amount of service time where if you're below it, September doesn't count, but I don't know for sure what it is. Anyways, having spent the last 3 months in Vegas, Snider should be below the super 2 line.

Let us not forget that what happens in Vegas...Snider raking is one thing, I'm slighltly less bullish on other desert-infused numbers.

Where the fuck you do get off calling him pasty? Jeezus.

The service time criteria for Super 2 is a moving target. The top X% of rookies will become super 2s.

They really need to get him up soon. Obviously a month is not long enough to tell if he can be the full-time LF next year.

Still, if this is Adam Lind kind of frustration all over again at least Lind seems to have panned out pretty well.

Can the Jays compete in 2010 with Doc, Romero, Marcum, and co., and with Hill and Lind, with hope personified in Snider, and with Wells and Rios back in form?

I know the whole marginal "If the Jays..." thing has been pretty infuriating over the past few years.

But frankly, if the Jays get within 90% of what they're getting from Hill and Lind, plus production from Snider and something close to their career averages for Rios and Wells, this could be a pretty scary team next year.

If you look at those third order wins, it at least gives you a sense that this team could really be something next year without blowing it up entirely.

Plus, look at all of the added depth they're going to have in the bullpen!

2010? Monkeyfudging PLAYOFFS!!!1 Just like we were promised in the off season.

Yes, but isn't all this excitement over Snider just an excuse to NOT sign a masher for next year? We need to sign a legit #4 hitter!

Hey Tao, when you've got nothing better to do, or are bored, or both; why don't you take a look at the Tao's Wondering Eye segment from the off-season and see if you would have actually wanted any of those guys on the Jays. Just an idea.

I was huge on Ibanez last year at the trade deadline, although it didn't necessarily follow that he would have resigned.

Wilner is now officially a propagandist! Halladay gave up 5 runs(4 earned) , 10 hits and he's still good??!! The Yankees braodcasters gave mad props to Doc BUT one of them mentioned the fact that they got 5 runs off of him at Yankee Stadium, which isn't like Doc. In addition, Doc gave up 10 hits in that 3-2 loss to Oakland. If anyone think sthat he is the same old Doc ...think again. Thanks to Ricciardi, who rattled him with all this trade talk, he's off his game. Bad Job, JP look at what you've done

Are you implying that the Tao has a touch of the Popinfresh syndrome?

Generic Viagra (sildenafil citrate; brand names include: Aphrodil / Edegra / Erasmo / Penegra / Revatio / Supra / Zwagra) is an effective treatment for erectile dysfunction regardless of the cause or duration of the problem or the age of the patient.
Sildenafil Citrate is the active ingredient used to treat erectile dysfunction (impotence) in men. It can help men who have erectile dysfunction get and sustain an erection when they are sexually excited.
Generic Viagra is manufactured in accordance with World Health Organization standards and guidelines (WHO-GMP). Also you can find on our sites.
Generic Viagra is made with thorough reverse engineering for the sildenafil citrate molecule - a totally different process of making sildenafil and its reaction. That is why it takes effect in 15 minutes compared to other drugs which take 30-40 minutes to take effect.
[b][/b]
Even in the most sexually liberated and self-satisfied of nations, many people still yearn to burn more, to feel ready for bedding no matter what the clock says and to desire their partner of 23 years as much as they did when their love was brand new.
The market is saturated with books on how to revive a flagging libido or spice up monotonous sex, and sex therapists say “lack of desire” is one of the most common complaints they hear from patients, particularly women.