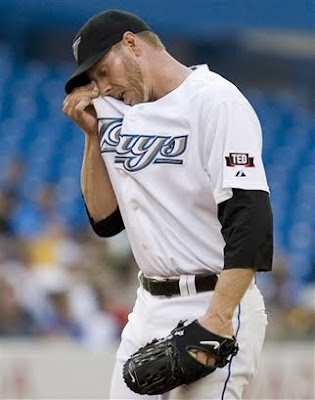 It's about a decade or so in the rearview mirror now, but the memory of the two weeks that we spent living with our our ex after we'd broken up is still pretty vivid. Palpable, even.

We spent those two weeks just trying to get along well enough to make things tolerable, understanding that at some point, we'd go our separate ways, and that this misery would subside (and be replaced with a completely different misery).

In some ways, that's how we've started to feel about Roy Halladay.

We understand that this might seem cheap and convenient to bring this up on the morning after Halladay's worst start in a year. But after weeks of emotional turmoil, waiting for the other shoe to drop, and now waiting even longer for it to finally drop (In the winter? Next July? After 2010?), we're left with this oddly detached feeling whenever we watch Halladay. It used to be that every Doc start was a Festival of Awesome, and a Celebration of This Precious Moment With the Greatest Pitcher Alive. And now, we just feel a bit numb.

We should probably shake it off and savour the moments that we have left with Doc, because it's gonna hurt like hell when he finally leaves. But it is the knowledge that the hurt is coming that makes us wish that we didn't have to bide our time and wait for it.

Speaking of waiting...
We had the iPod on shuffle this morning, and a Bruce Cockburn tune popped up. There are a couple of lines in that song that we figured Blue Jay fans could relate to right about now.

Somewhere out there is a place that's cool
Where peace and balance are the rule
Working toward a future like some kind of mystic jewel
And waiting for a miracle
Posted by Tao of Stieb at 9:44 AM

Email ThisBlogThis!Share to TwitterShare to FacebookShare to Pinterest
Labels: I don't know what I'll do if the Jays trade Doc, Roy Halladay, The Roy Halladay Depression

I think you've captured my feelings completely. Something feels like it has changed. And it's make me sad.

You and me both.

I feel so cold.

This sounds a lot like the recent plot turn in Jon & Kate Plus 8. But I hope you guys stay together for the kids sake.

Since my Twitter isn't working, I'll offer this here:

I think he was excited about finally joining a pennant race and when he wasn't traded I think he felt a huge letdown.

As much as he would never admit it; and as much as he is still going to be a great pitcher for the rest of the year, I just think his heart is not in it.

Tao, you've managed to eloquently state what, no doubt, the (vast?) majority of Blue Jay fandom (the diehards, anyway) is/has been feeling since July 31 4 PM EST, but have been afraid - no, terrified - to say.

And that's probably what I love about this blog.

This is probably a stupid thing to say, and I'd probably rip anyone else who said it. But here goes:

When I saw Doc's reaction after Ortiz took him deep, I thought "Wow, he's not super intense angry Doc. He kinda just sighed about it."

I don't know man. National game on ESPN in the U.S., and Doc gets one-upped by the dude the Red Sox were supposed to trade for him.

I hate to say this, but I think that's the end of the Cy Young dream for this year.

You put in words something that I felt but just couldn't explain.

And they ain't spoiling shit right now. Come on, Jays! I want the Nation's season to end the same day ours does.

he's still in the cy race - who else is ahead of him? greinke's era and loss totals are climbing; beckett, verlander, and sabathia are all over still over 3.00, and in the same ballpark with wins (13, 14). doc's not out by a long shot. although if he keeps getting 3.5 runs a game, he might not win another one...

Yeah, I took a look at Doc's stats since July 4, and he's still posting a 3.13 ERA, and still putting up good K-to-BB numbers. The WHIP is a bit high by his standards, but not really that bad.

Not to be a sore loser, but I think Doc probably got jobbed by the umpires last night on a few calls. I guess if the super-patient Red Sox let a marginal pitch go by, umpires immediately assume it must be a ball.

Not to mention that total goof up at first base that led to the bulk of the damage.

I've got a bad feeling that, in spite of his getting work over by the Jays the other night, the writers would love to give the Cy to Beckett. If the Sox make the playoffs, he'll get plenty of those dumb votes.

Tao, one caveat is how pissed off he looked during the last Rays game he started.

When Inglett misplayed the ball I thought he was gonna walk over and fuck start his head.

I made love to my boyfriend so much last night it gave me a Bruce Cockburn.

Yeah...but didn't we all feel that way about Joe Inglett?

We might as well start growing apart from Doc. The only way he's not traded in the off-season is if Rogers decided to pour money into the team, Yankee-style, and go for broke.

Personally, I think they should because I think the boost to all the revenue streams they control would potentially result in profits, but I just don't think they will.

Oh well, we still have the UFC, right Tao?!

I said it before and I'll say it again. The biggest blow to this team from the past year or so is Dustin's career being in jeopardy.

Dusty has legitimate #1 stuff and was seen in the Jays organization as being the heir apparent. A healthy Dusty makes Doc's trade not only less painful but logical.

Christopher, I don't know what you are talking about. Please do not elaborate further, either.

(In my mind, I've convinced myself that Dusty was just J Towers v2.0. It's easier that way)

I felt good about the team after the game one loss to the Red Sox. It looked like the spunky never say die Jays of circa May. Then last night, they looked defeated the moment Youk put the sox ahead 1 - 0. It was depressing to watch. Quite frankly, I got a glimpse of 2010 last night.

Doc can very kindly fuck off so I can get on with watching a shitty perrenial rebuilding team. Or something like that. For the first time in about 8 years, I feel like this team has little hope. I need an interbrew.

Hey eyebleaf...what the hell happened to your post over on 'Duk's Big League Stew?

Well, at least you got your point across....eventually.

Beckett got jobbed by the writers in 2007 when he mowed down everything in sight, he was left off of two ballots completely for the Cy Young that year.

I don't think two years later they're going to give him the award because they like him so much.