A walk off is a walk off 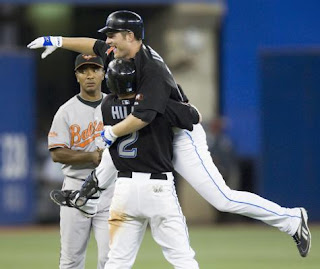 So, it wasn't exactly Joe Carter in '93, but Adam Lind's double to the wall to win the game in walk-off fashion provided a much-needed respite for the team and fans. These are the moments that remind you what it is you love about the game, and sadly, they've been few and far between of late. But it's still baseball, goddamnit, and it's still our team.

Yes, it will be a much different August/September stretch than Blue Jay fans had hoped for - especially after the scorching May - but still, there will be plenty of reasons to tune in and keep dibs on the club:

The continuing development of Adam Lind. The record-breaking season from Aaron Hill. Doc's quest for the Cy (and a gut punch to the Orioles in the rubber match would help). The comedic value of E5. The "open tryout" for the cleanup spot (let's go Mil-lar CLAP, CLAP, CLAP CLAP CLAP). The September callups (stop me if you've heard that one before). The quest for the 2010 rotation. To name a few, at least.

No, these are not the best of times, but rather than carry on in a fruitless attempt at encouraging group pity and self-loathing, I think I'll just link to this masterpiece. And then promptly shut the fuck up about it.
Posted by The Ack at 1:46 AM

Email ThisBlogThis!Share to TwitterShare to FacebookShare to Pinterest
Labels: It's still baseball

Adjusted expectations wish: I hope I see the Jays in the playoffs before the 92-93 alumni are too old to come to the ballpark.

We don't need reasons to watch our Jays. We can't help ourselves...

Millar was nails today. He crushed the shit out of the ball today, so what if it scraped the wall on the way by. This is the turnaround, motherfuckers!!!