What worries us most about Doc 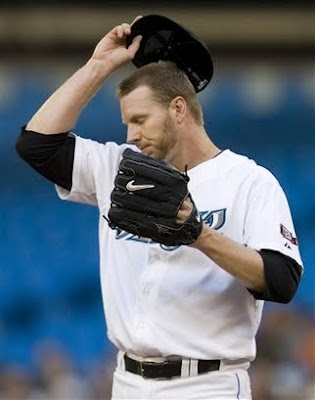 We've seen and heard a lot of people tracing Roy Halladay's recent swoon to the plethora of trade talks that surrounding him through July. We have a bit of a different theory, which disturbs us even more.

Earlier this season, we were getting prepared to write yet another love letter to Doc, and his amazing performance in the season's first half. To glean some additional information on Doc's excellence, we wandered over to Fangraphs. And to be honest, setting us loose in Fangraphs is a bit like sending a blind man into a strip club: We're not really sure what's in front of us, but it's definitely fun to feel our way around.

One thing that really stood out for us in that initial visit (and we've only referred to it vaguely around here) is the percentage of cut fastballs that Halladay throws. For the season, Halladay is unleashing his cutter on 42.9% of his pitches, which ranks third behind the Royals' Brian Bannister (53%) and the D-Backs' Doug Davis (46.6%). After those three, there's a drop off of more than 10% to Scott Feldman (31.4%).

The reason that most pitchers steer clear of throwing cutters (or throwing them too often) is because of the wear and tear that the pitch puts on the arm. And while we recognize the Doc is a cyborg from another dimension, it still made us worry when we saw just how many times he was going to that well. Halladay's arm has never been cut on (to our knowledge), and seeing that number in the Fangraphs charts scared us a bit. So much so that we didn't dare even give voice to the concerns in this forum.

But with the number of hits Halladay has given up lately (even the bloops and bleeders that victimized Roy last night), we thought we'd go back and revisit those numbers. And while we're not sure that they necessarily indicate that anything is wrong, they did make us raise an eyebrow.

In the month of July, Halladay began going to the cutter well a little more often, throwing them 47% of the time. But for the month of August, Doc has scaled way back on the pitch, throwing it 34.5% of the time, while relying more on his fastball (39.7%).

We're not sure if there is a reason why he's backed off of the cutter as the season has gone on, but we hope like hell that it has nothing to do with any discomfort that he might be feeling in throwing it. Because there's a whole other level of misery that lies just beyond the horizon if that is the case.
Posted by Tao of Stieb at 2:47 PM

I'd be curious if this is a pattern that has occured each season, where he lays off the cutter more during the dog days to not put too much wear and tear on his arm, particularily when he'd rather not take the risk on hurting himself than win a Cy Young Award and have the thing fall off during the award presentation.

Yeah, but even if he does scale back on the cutter, does that adequately explain his sudden transformation into Josh Towers? Or maybe I'm just bitter because he's been killing my fantasy team lately. (I have both Halladay AND Niemann, how's that for total fuckery) I just don't get it, though - if Doc is as smart a pitcher as we all think he is, isn't it reasonable to expect him to get by (even excel) with lesser stuff? Or is this just a phase for Doc and he'll emerge on Sunday with the extra day off and dominate like the Doc of old?

A year over year breakdown makes sense. I'll dig in a little more on this.

He's definitely not been himself lately. The evidence as stated points to his cutter as being his number one weapon in order to be effective. If he's not using it then hitters wait on his 2 seam and get hits.

Your blind man analogy was brilliant. I've never heard it before, so if you coined it, big hat tip to you.

(Of course, all of my hat tips are big, but you know that.)

Doc does have a history of "forearm stiffness" late in the season...so there's that.

Tao, I don't know where you're looking up month by month numbers on Fangraphs, but yes, please dig a little deeper on this because I'm too lazy to look it up myself.

I think a bit too much is being made of Doc "falling apart" late in the season. He's just had two bad starts in a row, both of which came against one of the league's top offensive teams (Boston and Tampa). In TB's case, it was the fifth time that Doc has faced in the Rays in two months, so it's not surprising that this familiarity is helping the hitters adjust. It's far too early to start proclaiming that Doc is somehow hurt, or has mentally given up due to the trade fiasco, or things like that.

SP is right, there is a history of this happening with him. There's also been a history lately of him straining himself due to not trusting the bullpen.

He's not in the tank, and he's not distracted. He's just tired.

It is very interesting for me to read this article. Thanx for it. I like such topics and anything that is connected to them. I definitely want to read a bit more soon.

You know what, buy GSM blocker to disable all spy transmitters in your room or office.