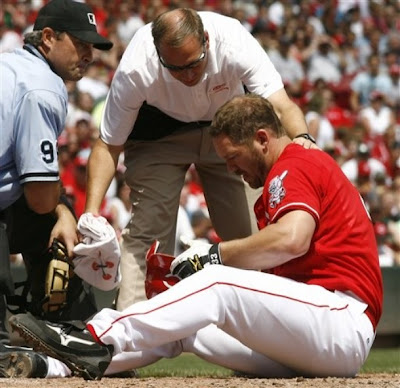 You know, it could have been much worse. But it still kinda stings.

When last we left you, the Jays had just traded Scott Rolen to Cincinnati for someone other than Yonder Alonso, and someone on Twitter blew our minds with the late and false rumour that Roy Halladay had been dealt at the last minute to Anaheimish for Brandon Wood and Erick Aybar. And being the upright citizens that we are, we repeated that falacious rumour so that all of you could have a nice prolonged freak out for a good dozen minutes or so before it was quashed.

It all seems like so long ago, doesn't it?

Thoughts on the Rolen deal
We've stated on a number of occasions that what we truly enjoy about the trade deadline is having opinions on players that we've never seen or even heard of before. With the Rolen deal to Cincy, we'd become so infatuated with burly power-hitting first bagger Yonder Alonso that anyone else was going to seem like a consolation prize.

That said, we're not totally upset by the package that came back for the former GBOAT, especially given that Rolen was pining for Middle America and would not have been a happy camper to stay in Toronto for much longer.

The key to this deal - aside from the savings of $6 million - will likely end up being pitcher Zach Stewart. The 2008 third-rounder has moved quickly through the Reds' system, reaching triple-A in less than a year. A closer at Texas Tech, Stewart had been starting this year at double-A Carolina, but returned to a relief role after his promotion to Louisville.

MLB.com still has a scouting report on Stewart posted on their site, including some teasingly brief video and a description of his as a late first round or sandwich pick. We're not sure why he slid to the third round, but there is a chance that the Jays managed to steal a pretty good arm out of this deal.

As for Josh Roenicke (the proper spelling of whose name is going to kill us by the end of the season), we were actually pretty shocked this weekend to hear Sportsnet's Jamie Campbell announce that he had turned 28 on Sunday. We're sure that Roenicke would have felt the same way, since he turns 27 on Tuesday.

Aside from that bit of nitpicking, we think that Roenicke is a smart pick up to help bolster the freak show that is the Jays' bullpen. With Scott Downs once again hurt (and we told you as much last week), it is good to have an option like Roenicke, who has saved 55 games in the minors over the past four years.

As for the most known name coming back in the deal, we're not exactly thrilled to see Edwin Encarnacion patrolling third base for the Jays. Given the plethora of left-handed starters that the Jays have been running out to the mound this season, having the iron-gloved Eddie at the hot corner gives us the hives.

We're hopeful that getting out of Dusty Baker's doghouse might inspire Encarnacion to put up half decent power numbers. At the very least, it would be nice if there wasn't a steep decline from the good numbers that Rolen had been putting up to this point.
Posted by Tao of Stieb at 11:02 AM

What does GBOAT stand for?

Would Rolen vs that pitch be a "Marquis Matchup?"


Thank you, thank you. I'll be here all week.

Greatest Blow Jay of All Time! wilner gave rolen that stupid name...when we know the greatest Jays of all time is Doc Halladay..Nuff Said!

Wilner didn't give him that stupid name. I did. Last April.

So suck my dick.

You gave him that stupid name, not Wilner? Well, then, I guess it's not thaaaat stupid ...

As for the GBOAT, it was first mentioned here:

I wasn't questioning whether y'all were telling the truth - [insert pronoun] just didn't know that. Funny, 'cause somebody read that post the first time.

Actually, Drew at Ghostrunners and the DJF did as much to popularize the GBOAT as I did.

I don't know if it was ever all that clever, but the more that funny people used the term, the funnier it sounded to me.

Well that's the weird thing - I thought it was funny at first, but started thinking some people were using it as a serious nickname (hence a question I posted a couple days back regarding it). I don't honestly know if anyone was or wasn't - but as "anonymous" above indicated, some people must have thought Wilner was using it seriously, and it appears to have been taken that way.
Y'know, when Wilner pulls a Joe Morgan and drops "he plays the game the right way" -- well, what can you say? He must be joking, right? Right?

I believe (almost sincerely) that Scott Rolen could be looked at as the best position player to ever wear the Blue Jays uniform. GBOAT is also a great nickname.

Good call on that Downs guy.

Yeah, the Downs post even prompted me to pick up Frasor and now he's closing.

The real GBOAT is Robbie Alomar.

I'd go with Alomar too if we're sticking with position players. I'm not saying Rolen couldn't give Robbie a run for his money, but I don't think he made the case in a Jays uniform. I think Aaron Hill could well make the case to beat Robbie - might require a pennant-inducing homerun off a prick reliever to do it though.

I would give a lot of things to see Hill do that against Papelschmear next year!

Hearing him likened to a bull in a china shop at 3B doesn't fill me with butterflies though. Hopefully Butterfield can work some magic.