The Blue Jays Great That You Won't See This Weekend 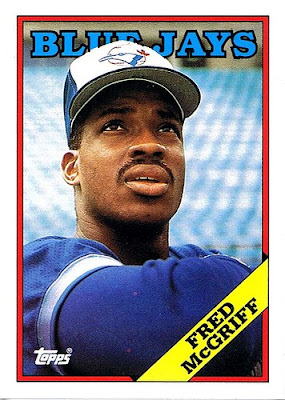 Two things have turned our mind to Fred McGriff this week.

Firstly, we're reminded of the Crime Dog by the trade deadline bonanza and all of the discussions about untouchables and the future of the franchise without its signature star.

It's likely because of those World Series years that McGriff's tenure in Toronto has been somewhat overlooked as the years have passed, given that he was the central player on teams that were accused of being "chokers". In fact, McGriff's performance was often singled out as one of the central reasons for Toronto's failures in the stretch drive. His only playoff experience with the Jays was a single series against the Oakland A's in 1989 in which he went 3-21 with three singles.

McGriff was also somewhat misunderstood in his time with the Blue Jays because of his patience at the plate. At the time, fans expected the big power hitting first baseman to be wailing away and taking "the bat off his shoulder" more often, rather than drawing walks and making pitchers work. At the time, few people saw his walk rate as a plus and few people even discussed OBP as any sort of indicator of performance.

And yet, a look at McGriff's rate stats over his four full seasons in Toronto should leave fans with a much greater impression of his place in Blue Jays history. He ranks third in OBP (behind John Olerud and Carlos Delgado) with a .389 mark, and second to Delgado in slugging (.530) and OPS (.919). Moreover, his OPS+ of 154 is tops all time for the Jays, and he still ranks in the top ten in home runs (125) in spite of his relatively small number of plate appearances.

It's all good to remember those two great teams in 1992 and 1993, and to celebrate their achievements. But as you spend the weekend waxing nostalgic for some of the more marginal passengers on those championship teams, spare a thought for a player who was one of the most feared Blue Jays to ever step into the batters box, and who rattled more than his share of windows beyond the centre field fence.
Posted by Tao of Stieb at 10:06 AM

So true; if it wasn't for the trade that sent him to San Diego, who knows what would have happened.

I was always a fan of McGriff, although I was pretty damn young when he was around, and when he was traded. I didn't know he put up such good numbers.

And he'll def. go down for having one of the best nicknames in Blue Jays history: The Crime Dog.

I like nostalgia posts. Thanks for your part, Fred McGriff.

Crime Dog was great. Although I think he only really got that name after he left Toronto.

When it comes to nicknames, Canadians aren't as clever as that. We're sure that they'd call him "Griffers" or "Griffsey" or "Fredsy". Something like that.

Denial of service attack. Damn hackers. They stole our jerbs!

Hate to say it, but I was totally lost today w/o Twitter.

I believe it was his 1987 rookie year, when the Jays went into NY .5 games back (in June) and won all 3 to go 2.5 up. McGriff hit a huge home run to right - top deck - at the time the announcers were saying it was the longest in the modern stadium, meaning Reggie Jackson never hit it as far as Freddy did. I hated seeing him go, but it worked out. Thanks for the post Tao.

Tao, are you heading to Toronto this weekend?

My best friend and I used to point to Freddie's near-.400 OBP all the time. It seemed then that young slugger Frank Thomas was the only other power hitter troubling the 100-walk plateau and sporting a high BA in those days. (I could be wrong, but we sure drew parallels between those two guys.)

And my God, he had the prettiest mutha of a home run swing, too. In later years he'd pull his trailing hand off the bat on follow-through, but with the Jays he kept both mitts on the bat, and it looked AWESOME.