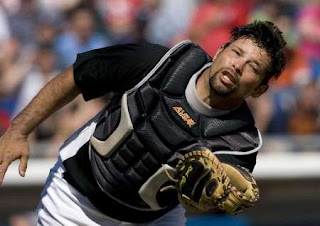 If you think, for one god-damned minute, that I'm going to discuss the weekend sweep in Fenway, then boy, do you have another thing coming. Re-live the misery? No thanks.

In many ways, Chavy is the ideal backup catcher. Terrific defensively (though feel free to prove me wrong with defensive metrics), he seems to develop a good rapport with pitchers and knows how to handle a staff. Never one to flash a menacing bat, he won't exactly provide a boost to the offense (.620-something OPS), but he won't embarrass himself either. I mean, we're talking about a reserve catcher here - whaddya want, Mike Piazza?

But let's cut to the chase. I like the guy. He's fun to watch behind the plate, with his demonstrative style and penchant for snap throws (fuck you, Dustin Pedroia). He's like Tony Pena Sr. used to be without the "LOOK AT ME BACK HERE, EVERYBODY!" swagger. And let's face it, the 2009 Blue Jays are short a few ticks in the "fun to watch" column this year.

With both incumbent starter Rod Barajas and Chavez coming up on free agency, it's doubtful that both (or either?) will be back. Barajas has said he'd like to sign a multi-year deal somewhere, which would seem to preclude him from attracting a deal from the Jays. In a perfect world, once uber-prospect (to us, anyway) JP Arencibia would be ready to step behind the plate for 130 games next season (he's not), with Chavez as his caddy.

Arencibia's delayed development might have thrown a wrench into those plans, but I still think the Jays would be wise to bring Chavez back for another go-around with the club. I, for one, would appreciate it. I'm sure that Chavez the baseball lifer would too.

On potential September callups
Word is there will be "no surprises" from the Jays camp when rosters expand on September 1:

"I think most of the guys we'll bring up, you've seen before -- not a lot of secrets," Ricciardi said. "I don't think we're going to be bringing up anybody that's new to the big leagues. I think just guys to help us get through the month with some extra players."

Hey, terrific! Let's just recall the same old same old who've helped propel the team to such great heights this season, shall we? David Purcey! Bill Murphy! Mighty Joe Inglett! Forget bringing up guys we haven't seen like Brian Dopirak and Fabio Castro, who might actually have a future with the club. That wouldn't be any fun, would it?

Look, I understand the limitations with the 40-man roster, etc...but a quick scan of the 40 is all it takes to see where there's room (cough Bill Murphy Brian Wolfe Michael Barrett Kevin Millar cough) to clear.

One would think that expanded rosters would be the perfect opportunity to clear out the minors and see what the team might have for next year....even in - no, especially in - a season when "playing out the cycle" has become the battle cry. But I suppose not for our 2009 Blue Jays.

Really, nothing about this season surprises me anymore.
Posted by The Ack at 12:04 AM

The Jays... just looked miserable in Fenway this weekend, especially in that Sunday game. Just no passion at all. I'm with you on the call-ups: At least bring up some young guys that want to be there, and cut bait with the Millars of the world. Maybe Lind, Snider, etc. can start gelling at least.

Why is JP even allowed to speak anymore?

Really? That's all we got? That's what it's come down to? Admittedly, the prospect cupboard, especially at the top levels, is pretty bare.....but why not use September to cut bait on the AAAA players and veterans who are most definitely not part of next year's team, and have a look at guys who might be, however slim the chances are.

I understand the call on Arencibia, who's getting sent to the Arizona fall league, so that makes some sense....but, I mean, are you worried about starting the clock on a guy like Dopirak, who's already, what, 25 years old? Castro? That's not the reason, is it?

It will all be over soon.

My spirit's essence wanes, as the mist of a long sigh on the coldest of winter days.

The only one I care to see is Dopirak, and I don't think JP's response was all that conclusive there wouldn't perhaps be one prospect summoned. I'll wait until Sept 8 to pass judgement.

This team hurts my soul. I should care that the Jays are still desperately trying to plod along and salvage the 2009 year (and risking a high draft pick, but it's not like they're going to pay over the slot anyway, am I right?). But quite frankly, I don't expect anything out of the ordinary with the Jays anymore.

bkblades: They went plenty over slot this year, I'm pretty sure they spent more this year than they did last actually...

And am I the only one who prefers Chavez to Barajas? I mean, there's only so much "close your eyes and swing hard" that I can take, and while I appreciate the homers of late, his moderate .430 slugging just doesn't make up for his abysmal .275 OBP to me.

Here's hoping he's a type B at the end of the year.