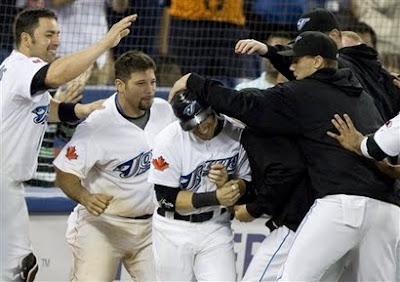 We managed to miss almost all of last night's game because we were caught in a dinner party where we were helping a couple choose songs for their wedding playlist.

(We're not sharing the contents of said playlist, lest we undo any sense of cool that we may have nurtured through a season of Friday Rock Outs. But in our defense, let us say that when Mrs. Tao decides that there should be Pussycat Dolls, there's gonna be Pussycat Dolls. And there's only so much that you can fight it.)

Nevertheless, we managed to tune in for all of the good stuff in the ninth. And what a wild ninth it was. Pinch hit Rodness! Scoots taking second on a fly ball! Walks! Belief in Vernon! Millar, who we still hate, walking the bases full! Randy Ruiz, teed up for the walkoff hit! Wild pitch! Scoots! Ballgame!

It's a good thing that we have the off day to recover from a single inning of offense that was more interesting than much of the month of August.

Some other random thoughts on the bottom of the ninth
A win is a win, so you probably shouldn't be upset that it wasn't choreographed to your heart's particular delights. But having said that, we would have enjoyed seeing a walkoff walk, if only so that there could be shrimp for the masses.

We also would have loved to see Ruiz get a hit and be the hero, but we'll have to content ourselves with the notion that J.P. Howell, even with two strikes, wanted to keep his pitch as far out of the Bronx Basher's wheelhouse as possible.

No love for Millar
We're not sure how we would have felt about "You're such a disease, Kevin" Millar getting the walkoff hit last night. Sure, we want the win, but we don't want to have any kind feelings towards Millar ever again.

One night this week, we fired up our MLB 2K8 and set it up so that we could heave pitches at head of "Kyle Morgan" (Millar's alias in the game because of his scabby activity.) It was cathartic.

Walkoff joy is fleeting
Was it just us, or did the enthusiasm over last night's walkoff win vanish before the cameras were turned away? By the time that the Jays reached the dugout, the faces were nearly as stoic as what you would have expected on the losing team.
Posted by Tao of Stieb at 9:42 AM

Tao, I thought the exact same thing: I'd rather go to extra innings than have Kevin Millar win this game. What a fucked up thought, but this is what Millar has forced us to. What a disease.

I was listening to the game on the radio (I don't get TSN), and one of my friends, whose goal in life is to hate Vernon Wells, texted me that Vernon was out in the 9th, but that the ump blew the 3-2 pitch call. It was as if he wanted Vernon to be punched out. The hatred has reached ridiculous levels.

Indeed. That is the new rallying cry, isn't it?

You better believe it, buddy.

Kevin Millar: I made my OPS disappear.
[thinks back to teammates saying bad things about him]
Cito: Kevin, you're completely helpless!
Scott Richmond: No, Kevin, you're what the French call les incompetents.
Marco Scutaro: Kevin, I'm going to feed you to Rod Barajas.
Vernon Wells: Kevin, you are *such* a *disease*! (ironical!)
Doc: There are 25 people on this team and you're the only one who has an OPS lower than my career win %.
Aaron Hill: I hate black people
Brian Butterfield: Look what you *did*, you little *jerk*.
Kevin Millar: [gleefully] I made my OPS disappear.

To an extent, I just want the Jays to keep losing at this point. I mean, I'm glad they won last night, but more wins means a worse draft pick (if they sign him) and I think it effects the type of draft pick you have to give up as compensation for signing a free agent (I know that when they signed Burnett, it didn't cost them a first rounder because they didn't have a very good record in '05).

I was praying for shrimp like nothing else. Fortunately I get to blame Gregg Zaun while basking in the glory of a walkoff win of any kind. Hell, any win is bask-worthy nowadays.

Funny how such a "cheap" win can feel so good at this point. (No sweep!)
A walk is a walk, however, and certainly not the same as a GDP.
The ninth was a gift, but they earned a bit of the glory.

You are a bunch a a-wipes. Kevin Millar is one of the nicest classiest guys in the Bigs. I Hope with all my heart he does not have to end his career in the land of the snotty French #(*&$.... I would like to see you only face lefties all season when you hit best against righties. Look at his all time stats. I pray someone below the border picks him up by the 31st.

When did Toronto become "the land of the snotty French #(*&$"? Must have missed the memo.

And we're praying someone below the border picks him up too, Anon.

Anon, please look at an atlas or if that's too complex just look at a globe. You'll notice that Toronto and Quebec are actually two totally different places. I'm not trying to confuse you it's just that Quebec is where the majority of the French in Canada live. Another clue would be that all of the comments and this entire blog is written in English...

Funny, I would have thought that would be France.

Millar does suck, but who else do the Jays have to replace him in the line up? Play it out and work out these issues in the off season.

If Dopirak was trying and failing at the major league level at least I would feel like he might learn something from the experience.