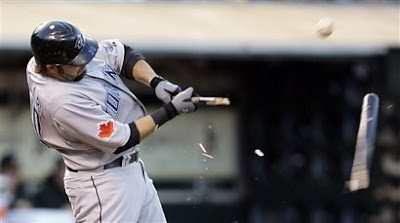 It's probably unfair, given the absolute shit show that the last six weeks of Blue Jays baseball has had to offer us, to attempt to single out one whipping boy and let him feel the brunt of our frustrations.

But seriously: Kevin Millar sucks, and it sucks that someone keeps allowing him to suck on this team. And to be fair, it's not really his fault that we (and notable others) have grown tired of him.

Before the season, we didn't mind the Millar signing as a low risk move to bring in an extra veteran bat into the lineup for the sake of insurance. Our exact words upon his signing were: "...we hope that his presence might encourage Lyle Overbay to rethink the 25 steps and moving parts that currently comprise his swing." Which might be the case, but who the hell would know given the amount of pine that Overbay's posterior has kept clean this season.

If Millar was even remotely approaching his career OPS of .812, then he'd be a superstar on the 2009 edition of the Blue Jays. But his execrable .663 OPS in 58 games is unforgivable, and nothing less than a waste of a roster spot.

And maybe we'd be a little more charitable about Millar's waning days in big league ball if it weren't for the fact that we watched the manager pull a vintage Cito move of leaving the middling veteran in a key situation (8th inning, one out facing righty reliever Phil Hughes) when he had a vastly superior option sitting on the bench (Overbay vs. RHP: .913 OPS).

And beyond that, the Jays have Randy Ruiz in Las Vegas mashing the ball like no other player in the affiliated minor leagues (25 homers, 101 RBI, .997 OPS). We could give a shit if the brain trust somehow figures that he's not able of replicating those numbers in the big leagues, or if he's a bad guy or whatever. Randy Ruiz would not post a sub-.700 OPS if he received the call up that he so rightly deserves.

(Or what about Travis Snider? Or Brian Dopirak? Something, goddamnit! Something!)

It's one thing to point to an unfortunate set of circumstances, like the multitude of pitching injuries, that have led to the Jays falling off the pace and looking towards next year. The Jays may preach that they have been the victims of bad luck this year, but on a certain level, you need to make your own luck, and not hope that it falls magically to you.

Because Kevin Millar ain't no lucky charm.
Posted by Tao of Stieb at 9:48 AM

I just want to go back to Boston. I was happy there. I was a cowboy!

I read on Mop Up Duty earlier today that if Millar makes it past 250 AB's this year, he gets a $100,000 dollar bonus. That means he has 41 or less at bats remaining with the Jays (hopefully).

And I fear that emancipation does not await our friend Randy Ruiz.

Yeah, the lesson learned is that when JP signs these shitbags THEY WILL PLAY. They will play as much as humanly possible, be the healthiest guys on the team, and Cito will lack the sense to take them out at any point in the game.

It's even more ridiculous when you consider that Overbay is capable of failing against lefties better than Millar is at hitting them, and we'd get Overbay's glove in the field. Just one of a dozen irritating things about this team that held it back and actively prevented the possibility of success.

Just how illogical it is that Millar continues to get ample playing time makes us all the more infuriated.

True story: I was at a Expos / Marlins game in Montreal back in July 2002 when a crowd of people started yelling "Millar, you suck" every time he came up to bat. Unfortunately, he hit a home run in the 8th, which put an end to that.

It can't really have success, I feel so.