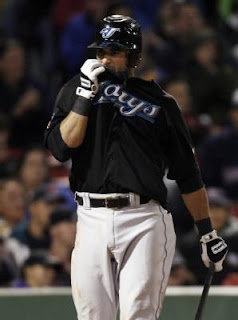 What to say about this one? Not much, evidently. The picture above says it all. It stunk.

A frisky ninth made the outcome appear much more respectable to the Jays than their performance warranted, and in the end....another one run loss. Stop me if you've heard this before (because you have).

On top of the on-field misery, our friends at Rogers Sportsnet treated us to the full "Sweet Caroline" treatment by the Fenway faithful during tonight's broadcast. Gee, parent company of the Blue Jays, thanks for that. I swear, if Campbell broke out into song, the odds of hari-kari were at least 50-50. Although a duet with Rance might almost have been worth it. You know, for the comedy.

(As an aside, I'd love to shit on "the nation" here, but it's hard to completely dump on a fanbase that sells out the building for 81 dates a year (plus playoffs - fuck), and has a good time while doing it. I could, but it would probably come across as petty jealousy....and that would probably be the proper read.)

I don't know. I got nothin'. Give me something to work with here, Jays.

Tomorrow is another day.

All I ask for is that the Blue Jays light up Papelbon or Rivera for a blown save this year. They've come close a couple of times, but there is nothing I would love to see more than the Jays take a save away from those guys.

The only thing that really got under skin in last night's game (apart from the Sweet Caroline Experience) was VDub swinging and getting himself out on the first pitch from Papelpuke. You'd think it might be a good idea to take a pitch considering he looked less than stellar the night before. Just saying.

Vernon 'Brewster' Wells needs to parlay some of his ill gotten millions into an ownership stake of the Jays. At least then we'd have an owners face to hurl our venom at.

Okay, I get that Wells is a 'free swinger' but lately he's been swinging at everything. I mean everything...