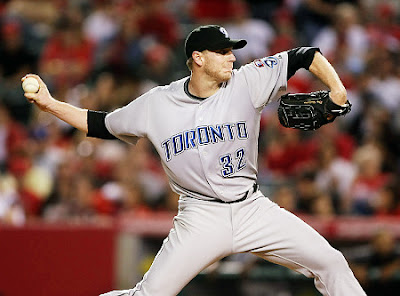 Who's kidding who? This season has been a series of humiliating kicks to the groin for the Blue Jays faithful. At times, it's been enough to make even your humble scribe turn our head walk away until this wretched wreck of a year is over and done with.

In the midst of our emo moment yesterday, where we pulled our hair into pouty bangs over our face and carved "FTW" into our desk, we started to wonder: What would we miss if we took the rest of the year off? Here's the top five reasons that we could come up with to keep the faith and stay plugged into the Jays for the remainer of the season.

1) Roy Halladay's Cy Young Chase: Toronto's been spoiled with Cy Young winners over the past dozen years, with Pat Hentgen, a Texan who shan't be named and Halladay all bringing home the honour. But having the opportunity to watch the best pitcher in the game have a Cy-worthy season doesn't really happen all that often. Even if Halladay has looked a touch lifeless in his last few starts, it's going to be worth it to tune in to watch him make a push for his second trophy. Not that anything is ever certain, but a second Cy would definitely put Halladay in line for Hall of Fame consideration.

2) Aaron Hill and Adam Lind's Monster Years: The Jays haven't had a 30 homer, 100 RBI season from any player since 2006, and they appear on the cusp of having two such performances from Hill and Lind this year. Before the season, we figured that these two players would provide secondary offensive contributions, but both have stepped up their game to a whole new level.

3) Ricky Romero's Push for the Rookie of the Year: Once held up as the prime example of J.P. Ricciardi's ineptitude, RR Cool Jay has put together a stellar rookie campaign. He should be able to stick in the rotation for the rest of the year, and it would be pretty sweet to see him chalk up another four or five wins and keep his ERA under 4.00. He'll be in tough against the Rays Jeff Niemann, so it will be compelling to watch his final ten starts.

4) September Call-Ups: Travis Snider should be back soon, and J.P. Arencibia should get a handful of starts down the stretch. Fabio Castro may get a look, and David Purcey might get another shot to bring his walk rate down. Some good performances now by the Jays of the future might be enough to keep us sane over the long winter ahead. Speaking of which...

5) The Long Winter Ahead: Give it three months, and when your TV screens are filled with endless panels filled with fatuous hockey gasbags, you're going to be pining for baseball. Enjoy the moments while they're still here.
Posted by Tao of Stieb at 10:17 AM

6) The Epic Battle: Who will finish the year with more RBIs, Vernon Wells or Marco Scutaro? Scooter leads by two going into tonight's action...

My #6) The Revenge of the Accardo!

I predicted at the start of the season that by the end of the year Adam Lind would be the consensus best hitter on the team, and while Hill may have more home runs I think it's fair to say that right now that statement is true.

And given that pretty much all my other predictions were wrong (Oakland could still take the West, right? Right?) I'll hold that one up high in a pathetic attempt to distract from the others.

In a pre-season post where we wondered who would be the team's offensive lynchpin this year, we said the following stupid shit:

The Candidates Could Be, But Likely Aren't: Travis Snider (because he's still 20 years old, and you don't depend on someone that young to carry your offense); Adam Lind (because he's going to have enough trouble keeping his head above water this year); Aaron Hill (because we're just going to go ahead and assume that his brains are still scrambled until he hits his 20th double of the season).

Were we dead on or what?!

That's why you're the Tao, Tao.

And I'm with Andyfest: RANDY RUIZ. He's going to finish with at least 30 home runs, at this pace.

Also, I'd love for the community's thoughts on my take on Posnanski's Ricciardi dump, yesterday:
http://www.sportsandthecity.com/2009/08/man-of-hour.html

you think Arencibia is going to get called up over Michael Barrett?

Also: Who is David Purcey?

Judging by their current stats, one would assume that 30-homer, 100-RBI man from 2006 is no longer with the team.

Who's today's goddmaned mystery callup, already. The suspense is killing me. Davis Romero? Fabulous Castro? Hayhurst? I CAN'T TAKE IT!!

At least this winter will have the Vancouver Olympics. That's hockey action I can get behind.

I am also a hot stove addict, so off-season moves are super fun.

Other than that, I struggle for reasons to go on.

I hate what hockey has become, can't stand football. I like baseball and formula one. Winter to me is long dark and full of nightmares of being stuck in an elevator with Nick Kypreos and Bill Watters.

6. The JP/Vernon Wells/Cito Gaston derangement syndrome cases are fun to watch as well.
7. It also fun to see how may ways you can screw up the spelling of zepc... Rzepchin... that Marc guy's name.

AT LEAST WELLS HAS BEEN HEALTHY THIS YEAR !!!

Good to see that you added to Ken Fidlin's list.

Actually, my point was that I totally off about the entire thing.

I find it kinda funny just how wrong I was.

But the whole thing is so mixed-up, I think you could sell it as a pretty good prediction with the right "angle".