100 Million Dollar Dreams Aren't What They Used To Be 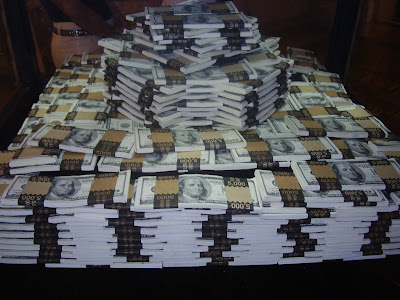 To be honest, we hadn't really given much thought to Bob McCown's recent assertion on his afternoon gabfest that the Blue Jays would jack up their payroll to the $100 million level for 2010.

While McCown is connected within Rogers and would have some access to information emanating from the executive suites of the corporation and the ballclub, there was something about the notion that made us shrug it off. Maybe we were still reeling from the Alex Rios waiver claim, and maybe we've just stopped believing any assertion that comes from Paul Beeston.

Or maybe we're just waiting until this team has a full time President and CEO and a new General Manager before we start considering the possibilities.

And even if the Jays are to have an extra $20 million in payroll next year versus their Opening Day payroll this year, they've already got close to $65 million of that already committed to existing contracts. And that figure doesn't include money that will need to be doled out in arbitration cases. Next offseason, according to the invaluable Cot's Baseball Contracts, the Jays will have nine arbitration cases to settle, and 14 arb cases coming up before the 2011 season.

It's all enough to make us rescind our offer to serve as the Jays' President once Beeston decides to give up the post.

Over the next week, we'll begin digging in to the Jays' payroll commitments for next year, the likely departures, the gaps that will need to be filled and the possible solutions for who could step in. It's a whole heckuva lotta speculating and wishful thinking, and is probably the sort of thing that we'd usually do once the season is over.

Speaking of which: While they're still playing the games, this season is pretty much over. So let's get the hot stove revved up now.
Posted by Tao of Stieb at 10:22 AM

Any chance you could provide links to Bob's comments? I'm assuming it's from his show, but it's been awhile since I've listened.

good times. i love hot stove buzz. obviously the issue for these guys has been, and continues to be, timely hitting. here's mlbtraderumors 2010 free agents:
http://www.mlbtraderumors.com/2008/12/2010-mlb-free-a.html

Those numbers are depressing. I'm tempted to ask if there's another MLB team that is more hamstrung by current contracts and further away from contention than the Jays.

Not much hope it would seem...

well, on the bright side, the rotation and the pen is packed with good young pitchers. it's a lot better to have pitching depth and looking for hitters than vice versa.

I already went over one take on that (how the payroll might look) and then I also did a take on Wilner's suggestions.

Taking Wilner's ideas (Figgins in LF, Hudson at 2B, Hill at 3B and Hardy at SS (obtained, he says, for EE) - and throwing in Chris Snyder as your catcher - while non-tendering Bautista and trading Camp and Frasor)...

And it would be a pretty impressive team.

Not that I am seriously accepting that's what the payroll would be, or that all those moves can be accomplished.

Marisnick twits that he is signed!

I'd rather have Carl Crawford than Figgins, but Crawford would be a lot more expensive probably.

Any of Branyan, Beltre, or Crede at third (Branyan preferred), any of Abreu, Damon, or Mike Cameron in the OF, bring back Scutaro at short, and trade for Ryan Doumit somehow.