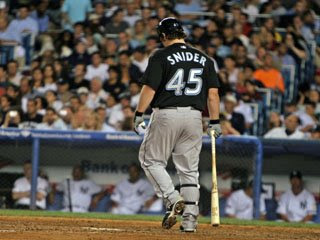 The whole "Super Two" status thing with young players is complex and always a bit of a moving target, and therefore makes us very dizzy.

For the uninitiated, achieving Super Two status means that a player gets to go to arbitration earlier and more often (four times rather than three) against his team, essentially quickening the pace at which he begins taking them to the cleaners. And if The Pasty White Hope is what we all hope he is, he would command a pretty penny upon his first go round at the arbitration table.

As for a vaguely specific definition, the MLBPA says:

Did you get that? Yeah, neither did we.

Fortunately, we have some clarification on this from the always dependable MLB Trade Rumo(u)rs. According to MLBTR, Snider will need about 51 more days of service time before he becomes eligible, which basically means that the Jays will likely leave him in Las Vegas until sometime after August 20.

So Snider has another three weeks in Vegas to rake on PCL pitching and catch some Cirque de Soleil, and we've got another few weeks of seeing Joe Inglett voodoo himself up to a .473 OPS.
Posted by Tao of Stieb at 1:26 PM

I've always considered myself pretty good with reading comprehension, but I had to make myself a little diagram on some scrap paper to get that paragraph. Now I know why First Nations people feel cheated.

I'm actually really glad that MLBTR posted that thing on Super Two's because before that, it was about as clear as mud.

This means Millar is a Blue Jay for another 15 days.

Call me crazy, but I don't think Snider has anything to do with Millar. I think keeping Millar around has more to do with trying to move Overbay in a waiver trade. If the Jays can move Overbay and don't have Millar they would not have a player on their roster who can field 1B (Bautista has 4 games played at 1B, Barajas 9). Of course, they could trade Overbay, release Millar, and call up Dopirak and Ruiz. But if those stink it up there is no one else to turn to.

I could see the Jays trying Encarnacion at first at some point, depending on what sort of third baseman they might have next year.

Dopirak has been fantastic at LV so far. I wouldn't be surprised if he gets lots of playing time in September.

Also, there's been talk that the Jays want Adam Lind to go to the Instructional League to play first this winter. Seeing him run the bases, I wonder whether if he could actually get the footwork down, but it's worth a shot, especially if Brian Butterdude can work his magic with him.

@Tao,
I agree with that being the scenario for 2010. But in the short-term, the Jays would be in quite the bind if they had the chance to unload Overbay's salary and what held them back is not having a player with experience at 1B to eat innings for the rest of 2009. I'm not sure if it's a good idea to have two minor leaguers as your only options at 1B which would be the case if Millar is DFAed. Who knows though, maybe JP is perfectly comfortable with two minor leaguers at 1B. I don't know, I'm just trying to find an explanation for keeping Millar that goes beyond "he's good in the clubhouse."

This is the reason why I wanted Snider to start the season in AAA. Instead of taking earning quality AAA at-bats he had to get beat-up in the majors. All's well that end's well.

The Cubs just dumped B.J. - guess that didn't work out so well.

Maybe I am missing something but Why August 20? 11 days more in August, 30 in September, 4 in October.