The Pasty White Hope gives us reasons to believe 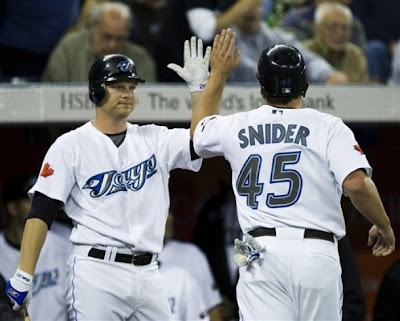 More than this weekend's series win against a very good Angels squad, we were brought out of our prolonged funk by watching the play of Travis Snider throughout the series.

Given how quickly Snider ascended through the Jays' system, it is easy to forget that he'll be just 22 years old on Opening Day next year. But when you observe the manner in which he is maturing at the plate by leaps and bound, it's hard not to get excited about his potential over the next six seasons.

In particular, Snider's new-found willingness to take close pitches and to lay off breaking balls thrown on the inside part of the plate will help him immeasurably going forward. While he's still going to be a hitter who will strike out a lot, his willingness to take a walk and to work the count makes us think that he'll end up more along the lines of a patient, high average and high OBP hitter like Lance Berkman, and less like am all-or-nothing wailer like Mike Jacobs.

And amazingly enough, Snider's managed to escape from the very bottom of the order on a couple of occasions, which gives us a vague sense of hope that Cito Gaston isn't going to stifle his development in the way that he did other significant prospects towards the end of his last tenure in Toronto.

The RR Cool Jay RoY Chase
Ricky Romero had a nice solid outing on Sunday, dropping his ERA to 3.91 for the season. At present, he's posting an identical 11-5 record to fellow Rookie of the Year candidate Jeff Niemann of the Rays, while Niemann has the edge in ERA (3.71) and WHIP (1.30).

In the past month, Romero's walk rate has gone up significantly, pushing his WHIP to 1.40. For RickRo to go over the top of Niemann, he'll need to keep his walks down while hoping for a few disaster starts from his counterpart.

And conveniently enough, the Jays face Niemann and the Rays tonight. If this Blue Jays team has any self-respect, they'll light up the Rays' tall righthander and help their teammate's RoY candidacy that much more.
Posted by Tao of Stieb at 9:29 AM

I wrote this comment yesterday, but it's still most apt:

When Travis Snider hits an opposite field home run, everything seems right in the world.

"But when you observe the manner in which he is maturing at the plate by leaps and bound, it's hard not to get excited about his potential in over the next six seasons."

"Mature" is the word that kept rolling through my head after seeing some of those swings.

When Rios first came up, it seemed at times as though he was a bit overwhelmed by the level of play, and just wanted to get his bat on the ball. He managed to put up a fairly respectable number in terms of average (.286 for the season), but that his the fact that he was somewhat lucky (.355 BABIP) and lacked authority when hitting the ball (1 homer, .383 SLG).

Snider, on the other hand, hits the ball hard to all fields (.447 SLG through his first 62 games), and looks as though he is ready to step into the middle of the lineup any day now.

I don't want to get too far ahead of myself, because there is many a slip between a cup and a lip...but because of those solid fundamentals, I can see Snider developing into a perpetual 30 homer 100 RBI guy.

They had a story on Sportsnet where Snider acknowledged he was too immature to take advice from Cito and Tenace earlier in the year.

Part of the reason is this guy is one of his advisers and he advised him not to take any advice.

"If this Blue Jays team has any self-respect, they'll light up the Rays' tall righthander and help their teammate's RoY candidacy that much more."

Also, it would be nice to see them help ROY's candidacy for another award get back on track...

Speaking of power in the lineup: why not Matsui next year?

Have wondered about either Matsui or Damon for next year.

Matsui's numbers don't seem to be a product of Yankee Stadium (better on the road than at home, actually), but the fact that he hasn't put on a fielder's glove all year is a concern.

There's probably a limit to the number of LF/DH types that you can carry on your roster, and with Snider, Lind and possibly Ruiz, there's plenty of those already here.

(Ruiz coming back is a bit of an assumption, I suppose.)

Matsui DHing in a Jays uniform would look really good...

Haven't you all settled into the fact that they're clearly going after Delgado this offseason?
/sarcasm.

If he were ready to play for a minimal amount, I wouldn't mind Delgado back as a DH.

What do you have against Carlos?

//...Cito Gaston isn't going to stiffle his development in the way that he did other significant prospects towards the end of his last tenure in Toronto.//

Really Tao, Fuck off. Batting him ninth isn't going to stiffle (sp) his development. He has already had some pretty key at-bats out of the ninth spot.

As for Cito and young hitters; see Adam Lind.

Stiffle wasn't a typo, it's a word we use in Canada. No really.

And it's great to see what he's done with Adam Lind, but some of us recall him sitting Shawn Green in favour of a washed-up Rueben Sierra. Or jerking around Delgado for his first couple of years in the Majors.

I'm not sure that I was indicating that keeping him in the ninth spot was going to be the thing that stiffled him. It's more a matter of keeping him away from lefties and sitting him in favour of washed up veterans that would be the trouble.

Cito is a real stiffler.

Also, see what Cito tried to do to my personal all-time favorite Jay, Johnny O (I may have to start a blog with his namesake).

Cito's a mixed bag. Love and respect the championships, love the Lind success, wonder if "anyone could have managed those 92-93 titles" as others argue, and wonder what the later phase of Cito Mach I means. I was too young and enjoying it too much to really know now, hence Cito's ample benefit of the doubt that has only begun to wear thin starting this June.

RE: Sierra, I wish he'd done more steroids with the Jays like he did for that brief Yankees resurrection and I wouldn't have sweated the treatment of Shawn Green.

If Ruiz is back and at least as good as his current small sample size next season, I prefer the low-cost alternative to Matsui. But for butts in the seats in a multi-ethnic city and for some LF/DH power, they could do worse - esp since Snider is now being looked at as a RF.

I have a man-crush on Damon that dates back to his Royals days - it's true - but I expect him to finish out a Yankee. It wouldn't be a bad idea just to sign him strictly to keep him from facing the Jays, though.

I dunno Darren: .286 / .365 / .517 with 22HRs would be sterling DH numbers for this team from where I sit. It's not Manny territory, but we're talking about replacing freaking Millar here, or Ruiz whom I like - and would like to see tried out - but is probably not the solution long-term. So you're talking about replacing a relative dead zone in the lineup with above average production. If you're arguing that Damon's year is a beneficiary of the new Yankee Stadium, there you may be right.

And you're right that they shouldn't overpay him, but did the Angels overpay for Abreu this year? There are bargains to be had. I can only hope the Jays, under JP or his successor, find them. Delgado might turn out to be one.

Might I add those would be good numbers without 30-some games left. Probably more HRs coming for Damon.

yikes, Doc is getting lit up, lit up alright.

Hey, Jim, I don't know what Damon would be looking for, but I've heard 6-8 million a year. I don't know if that's overpaying or not. If it were between being clogged with Damon or Matsui at about 8 Million or just trotting out what we have, I would probably go with the kids.

I try to pretend Millar is not on the team.

In any case, Jim, I like the cut of your jib. Maybe you, me, and Bruno will have to vacation in NYC together.

Who's Bruno ? Should I be worried?

I think the real issue with any Damon or matsui contract will be years. If an abreu type deal (short term, not insane money) is out there for that kind of production, I jump on it.

No post from The Tao today? I am worried.

Oh really you wouldn't mind having at least (?) the 1.000 OPSing Ruiz? How likely do you think that is?

@Jim Bruno von Rottweiller. I only know him from here so I couldn't vouch for your safety -- or mine for that matter. 'Some men just want to watch the world burn', ya know.

Come to think of it, he hasn't been around for a while.