Finding hope in another one run loss 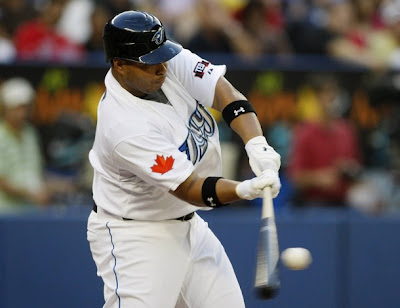 Last night, we had the rather bizarre feeling about a half-hour after the Jays' 10-9 loss to the stupid Red Sox. We were kinda okay with the game.

It could be that for the first time that we can remember this season, the Jays had what seemed to be a pretty formidable lineup. Between the call up of the Rosy-Cheeked Raker Travis Snider, the continued production of Randy Ruiz, and the absence of any Millars or Ingletts, we could feel pretty good about the offense.

Hell, the Jays hung seven runs on Josh Beckett, two on super-prospect Daniel Bard, and made Jon-O Papelbon work like a monkeyfluffer (33 pitches) to get four outs.

In a season this bleak, sometimes you have to dig elbow deep into the muck to pluck out a truffle of hope. If the Jays are going to continue to lose, it's at least a bit heartening to see them go down with a fight.

Who do you boo?
Apparently, everyone loves Casey Janssen because he's such a nice boy, so no one is going to give him too much grief for playing hot potato with a bunted ball in the eighth. (And BTW, how weird is it that Janssen only gets charged with one earned run, when it was HIS error that led to the three runs scoring?)

Then on the other side, Vernon Wells hits a line drive to the deepest part of the ball park off the other team's closer for an out, and gets booed by the meatheads.

We're just saying: Vernon should change his name to "Gordie" or "Dougie" in the off-season, go to a lot of Leafs games, drink lots of Tim Horton's and develop an instinctive air of superiority over Americans so that he can ingratiate himself to the hosers.
Posted by Tao of Stieb at 9:23 AM

A-fucking-men on the "Why do you boo?" bit. I'm going to the game on Monday night. Look for me on TV. I'll be holding the "I Believe in Vernon Wells" sign.

And "Dougie Wells" sounds about right. This town is ridiculous.

What's the possibility of Snidey playing at first next year? He is an awkward right fielder and during last night's game he badly misplayed a ball that can only be described as Canseco-like. Snider giveth (homers), but he also taketh (misplayed balls in the outfield). Put TGBGPWH where he belongs, first base.

Snider seems to have a pretty good arm, and he made some decent plays in left in the first part of the season. He's not the most graceful player out there, but I'd give him more than a game before judging whether or not he can play in RF full-time.

And maybe it's just me, but it seems that Wells gets booed less when the Sox or Yankees are in town. Just because those fans maybe drown out the Jays fans.

Wells deserves some boos, but certainly not what he is getting. The meathead fans aren't baseball fans, they are hockey fans with nothing else to do. I'm going to tonights game with a decent crew of 12, so I will rally the troops and get some support for "Dougie" Wells.

I'd think that Lind at first and Snidey in left might be a better option. Maybe...Lind seems a bit lost on the basepaths at times, which makes me think that his footwork at first would be a nightmare.

I've thought about Snider making the move to first à la Lance Berkman, and I could definitely see it.

On that play, though, Snider ran a long way and just took one stride too many. It wasn't a horrible play, in that he could have pulled a Matt Stairs or Bobby Abreu and just jogged towards the ball and let it fall. At least he showed all that heart and grit and whatever that people love so much.

And for all of you who bitched and moaned about Rios in the field: You're gonna miss his range out there. Rios got to a lot of balls without breaking a sweat.

@ Tao, this is why you have the best jays site , along with Eyebleaf of course. You hit the nail on the head immediately with the one run loss fiasco. I realize how the Jays hit the vaunted REd Sox pitching BUT even still they won the game...by one run and the Jays lost.

Janssens, i have nothing aginst him, but I hated how certain people made him the pitching messiah earlier in the year. The BP has been iffy this year and in the off season they need to decide what is the course of action. A Let Butter become manager and do his magic on the pen B Keep Accardo up C get another reliever and trade one of the jerkjobs that currently are in relief like Carlson AKA King of Relief Douches


Wells? The fans were expecting a homer for a change. Is that too much to ask for a player that makes so much? Listen, it is ridiculous BUT wells sucks and this is not St Louis,Tao. WE've had enough of Rios and wells ,too. You can shut up the fans BUT tearing the cover off the ball. Wilner loves to describe these woulda,could, shoulda almost hits by various Jays in losses and the novelty has worn off. Nice that they came back but in the end the game was worthless because it was an L. And it keeps those Bloody Sox in the wild Card race.

Janssen only gets one ER because they're meant to be a measure of how well the pitcher pitched. Fielding isn't part of his pitching performance, so no ER. Similarly, FIP wouldn't take it into account.

I actually say that. A lot. It's disturbing. And kind of awesome.

Tao, saw your back and forth on Twitter with "sportsmarketer1." Way to keep your cool. I might have lost my shit. Blue Jays management simply cannot win, no matter what they do.

And that was no error by Snider last night. That was a tribute to the Blissfully Oblivious Gazelle. Respect.

On a brighter note, I am now the proud sponsor of Jim Acker's baseball reference page, so I've got that going for me.

Tao - I did not link it back to this blog, because I was fairly certain that you wouldn't want the legacy of my guy Acker attached to the glory that is ToS.

I've always been bothered by the unearned runs for pitchers committing the errors. It's right up there with fouling a ball straight back into the glove not being an out, unless it's strike 3. Bat hits ball + ball gets caught = should be an out!

Shooting pucks into the batting cage? Finally some entertainment down at the baseball rink...

The problem is that an error is not necessarily an event that you can solely attribute to the pitcher. So Casey bobbles the bunt, but maybe no runs score that inning if overbay steps off the bag and gets the ball instead of being afraid of the runner. So that error is maybe 75% Janssen and 25% Overbay.

And Stedron, the foul tip thing is a rule because it's too hard to tell if the ball was tipped or not, and it's too easy to catch a very slight tip.

Oh, I know WHY it's a rule, it just comes across as one of those things like when you invent a game as a kid, and you change a rule halfway through the game. Like we make a game where if you catch a batted ball before it hits the ground, you're out. Then the first time a foul tip is caught, the hitter amends the rule because "that's not fair!"

"That's not fair"...Wow...I just had a sudden rush of memories from basically every sandlot baseball game that I played in my youth. Most of them ended in a Youk-Porcello level brawl.

@Ack: You can feel free to link it back to the blog. I'll take all of the Acker love I can get. I am, above all, an internet traffic whore.

Re: Shooting pucks into the batting cage: Excellent idea. And after Wells puts a few biscuits into the oversized basket, they can bring out a few Leafs to fire pucks high and wide. Heyo!

@eyebleaf: thanks for having my back on that. I respect sportsmarketer's take, but I just don't think that it makes sense to say "We've got a bunch of dead weight on our bench, so we should use that money to put towards draft picks."

The point is that you still have to field a team every year, and you can't really lop 4 or 10 million dollars off your on-field product and put it into drafting and development, then expect to put a half-decent team on the field. (Exhibit A: The Pittsburgh Pirates.)

I know what people mean when they say that, but you've got to keep those two pools of money separate in your mind.

Hey Ack, give credit for sponsoring Jim's page where credit is due. You owe Cock Cheese a bagel.

Cock Cheese I love your fabulous name. Maybe we can meet over a cup of coffee? Or meet at Le Rectum in Montreal. I think that Cito's Cheese is a bit tastier,though.......

I want to spread some cock cheese on the Ack's bagel.

It's true, the Cheese humiliated me into it by calling out me out for being a...er....cheap.

(I very nearly provided the GJF with some ammo there.)

I haven't looked in a long time but earlier this year Adam Lind was statistically one of the best base runners on the team. That could have changed a lot though, and it really surprised me.

If Lind is statistically a good baserunner, then those metrics don't take into account the fact that when he runs, he flails his arms around like an 11 year-old girl playing freeze tag.

Good is perhaps the wrong word. Smart? He's certainly not fast nor pretty, but he doesn't run into stupid outs and advances when he should.

Lind is about .6 runs below average as a baserunner this year. Interestingly Bautista is our best baserunner right now at 3.4 runs above average.

Yes, congratulations on doing your job for once, Wells. I would have preferred mock applause.

Travis Snider is a nice fit for the hosers.

@ The Gay Jays fans, neither one of you is the original....I am. You two poseurs and your cock cheese..pass the cock cheese and pass some cock! LOL...you two girls have nothing on me......