Hey, I remember that guy! 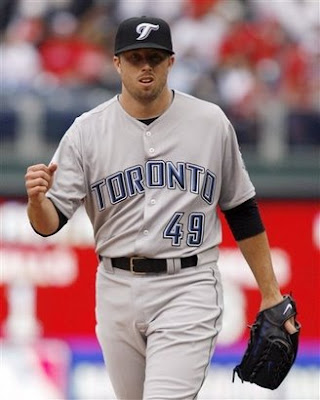 Sadly, our PVR decided to start acting like a bitch yesterday, so we didn't get any video evidence of Accardo's reappearance in a dramatic 8-7 win over the Phillies. But reading the boxscore and seeing it in our mind's eye, he was awesome.

(Oh, and thanks to our good pal Furious, whose one word emails kept us simultaneously confused and informed as to the progress of the game as we sat in off-site meetings all afternoon. That was fun.)

Hey, did the Jays just sweep the defending World Champs?
Well golly geewhillakers. They did. So we plan on spending the day kicking people in the face as they attempt to climb back on the bandwagon. (Get on and stay on or stay off. Those are your choices.)
Posted by Tao of Stieb at 6:23 AM

Email ThisBlogThis!Share to TwitterShare to FacebookShare to Pinterest
Labels: bandwagons, Jeremy Accardo, Sweep or Be Swept

Do you think if enough fan pooled their money together that we could convince Jeremy to grow the mullet back? He could be the 2000 version of the moss man. Someone better get that reference in here. If you don't then you need a kick in the face the second time you try and get on the bandwagon.

Check his profile pic on mlb.com. That was a nice beard he had in the spring -- I think they sent him to Vegas till he promised to shave, which he then did on the red-eye, much to the chagrin of the other passengers who had to use the tiny bathroom after him.

Accardo looked like the Unabomber with that beard. I kind of miss it.

Tao, it was kind of nostalgic to see Accardo get the save. Because if he didn't, who the hell knows who would've come out to pitch the 10th?

According to Wilner, that would have put Overbay in line get his first win.

Hell, if Nick Swisher can pitch an inning ... why not Overbay?

Nice sweep of the Phils. Let's hope we don't go all-2008-Jays against the lowly Nats this weekend...

I bet rolen could pitch well, he guns it from third to first dead on 95% of the time

Boston has the rat-faced Pedroia, but we have Accardo, who looks a lot like a beaver, imo.