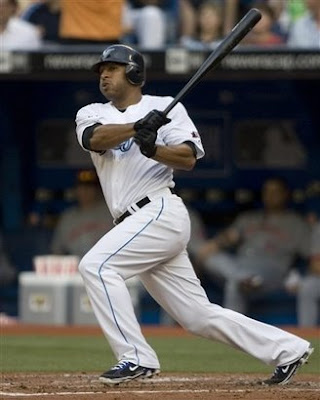 At least Vernon Wells still has his sense of humour.

The Jays' struggling centerfielder extended his hit streak to eight with a double and a homer in last night's 8-2 win over warbling troubadour Bronson Arroyo and the Cincinnati Reds. Following the game, he recognized the recent displeasure of the Toronto faithful by noting: "The fans started cheering my new nickname - Boo."

Hey, if the man was looking for a new nickname, he's certainly found something with a nice ring to it. "Boo" Wells sounds great, reminds us of To Kill a Mockingbird, and has the added advantage of being impossible for naysayers to drown out. It's not unlike the cheers that greeted Sweet Lou Thornton back in the day, or that now greet Red Sox slugger Kevin Douche-kilis. You can't even boo those guys if you tried.

And given Wells' performance over this recent streak, there will be plenty of reasons to offer up a hearty cheer of "Boo!" over the rest of the homestand. Wells has 13 hits over those eight games, including four doubles and two homers, and has posted a .996 OPS. More importantly, the Jays re 6-2 over that span.

(He's also sent the Vernon Wells Hatred Advisory System plummeting all the way down to "Elevated".)

We wouldn't want to indulge in a hoary sportswriter's cliché like "As Boo Wells goes, so go the Jays"...but the Jays will unquestionably need him to return to something resembling respectability if the team is to succeed this year or over the course of his long-term deal.

Our favourite rookie starting pitcher? How do you choose just one?
Here's a question that really only applies to the 2009 Blue Jays: Which of the teeming multitudes of rookie starting pitchers is your favorite. Might you enjoy a bit of the Ricky Romero? Were you more of a Robert Ray sort of guy before he got hurt? Perhaps you lean more towards Brad Mills?

Well, for us, it's tonight's starter, Brett Cecil.

Putting aside any hype or history, we've just really enjoyed watching him pitch and observing his approach. He throws a lot of strikes, and doesn't pick and nibble in the way that too many young lefties seem to. His numbers so far this season have been skewed by the one disastrous shit-kicking that he took at the hands of the Red Sox back in May, but he's pitched very well in each of his other starts at the big league level this season. We always worry about rushing pitchers before their time, but Cecil has looked every bit the impact starter that we hoped he could be.

With the Jays' preseason projections for the make up of their rotation blasted to bits and blown away with the dust, we could see Cecil settling in nicely for the next several months without having to worry about the label of "number 3" or "number 5" starter or what have you. He can set any such expectations aside, and just be one of the dudes who pitches well enough in between Roy Halladay starts.

I think Richmond is my favorite so far but it's hard to argue with Cecil. His approach is mature beyond his years.

Does Richmond still qualify as a rookie? I guess he might, given that he only pitched a handful of games last season...good call.

I'm stuck between the Richmond and Romero. The Edmonton Cracker-Cat thing goes a long way with me, but Romero looks almost dominating at times.

Technically, Richmond is a rookie and of course my vote is for him.

That "Boo Wells" thing actually reminded me of a conversation I overheard in the clubhouse on Tuesday. I think Hill said something to the effect of "What do you need advice on,V?" ... to which Wells responded "Hitting!"

Hayhurst qualifies as a rookie as well. He shouldn't be mentioned in that group of course. Probably the correct answer is who had the most recent dominating performance. All three are solid

For some reason, I salivate at the prospects of the rotation next year with Halladay, Marcum, Cecil, Romero, Richmond/Tallet.

If not for that potential, I might go seriously fucking blue with depression over the recent prognosis on Dusty.

I only refer to him as Rick

Where is everybody?! Where did everybody go!?