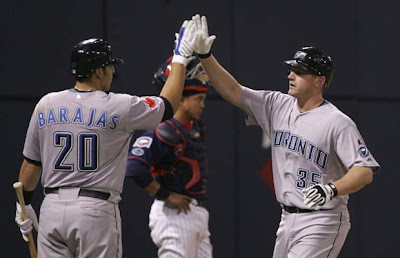 It might seem a touch early, but five weeks from today, the MLB trade deadline will be upon us.

(The Trade Deadline on the Friday before the August long weekend? Somebody's just marked his day off on the vacation calendar!)

We've tended not to trade in bogus trade speculation over the past couple of years, but with the Jays facing some expiring contracts and with some regulars having seasons that may make them attractive at the deadline, it at least bears mentioning.What the Jays do, of course, will depend on where they sit in the standings in a month's time and whether if they are looking to load up or get ready for the 2010 season.

Expiring Contracts - Scoots, Barajas, Millar and Johnny Mac
The Jays have received excellent value this year out of the bargain contracts that they handed out a few years back to Marco Scutaro and Rod Barajas, and both could be attractive players to other contenders at the deadline.

The catch, as always, is that the Jays may well dispense with the haggling over other teams' marginal prospects and take the compensatory picks that may be available to them if either Scutaro or Barajas walk. Scutaro seems likely to be a Type A free agent and Barajas may be close to that level, although the geometry and analysis that goes into those determinations are a bit beyond us.

Our guess would be that the Jays will look to open their wallet to hold onto Scutaro for the next few seasons while waiting to see what Justin Jackson becomes. Keeping Barajas for a possible 2010 run at the division would make some sense given the struggles that J.P. Arencibia has had at Triple A Vegas, but with Scoots likely getting a healthy bump up from his $1.1 million salary, the built in raises to Wells, Rios and Hill and the always present spectre of Roy Halladay's contract extension looming, it's tough to figure how they'll be able to tack on much if anything to Barajas' current $2.5 million stipend.

John McDonald's contract comes up at the end of the season as well, and given the dearth of playing time he has received this year, we'd anticipate him moving to a National League club as a bench player and defensive replacement. Meanwhile, Millar's contributions have been mostly negligable over the past month or so, and our guess is that the Jays would move him if there was any interest at all.

Value propositions - Lyle Overbay
There are a lot of reasons to keep Lyle Overbay for 2010, not the least of which is the relatively cheap $7.9 million that he'll make next season. On the other hand, that contract, along with the notable uptick in his production this year, could make him a desirable commodity on the trade market.

As with Barajas, it doesn't seem as though there is someone in the system ready to step in and take over for Overbay for next year. Brian Dopirak might be an option, but it would be beneficial to see how he plays at Triple A first. Prospect David Cooper has taken a step backwards at Double A New Hampshire this year (.666 OPS), while Brett Harper seems like more of a Quadruple A-type (.319 OBP).

Another option would be to move either Adam Lind or Travis Snider to first next season. Both are under the Jays' control until 2013 and beyond, and the team would save more than $7 million at first base if either of them were to step into the role. However, there are more than a few questions as to whether either of them could play the position, and Snider's back troubles are particularly worrisome.

Who could the Jays get in return?
We wouldn't imagine that anyone who came back to the Jays would have any sort of name recognition. If any of the aforementioned players move, we'll probably spend the day reading outdated and superficial scouting reports on some dude who's just had a middling season in high-A ball.

Not that there aren't players to be found out there. When the Jays shipped out Matt Stairs on August 30 last year, there weren't a lot of people jumping for joy at the returns. Now, we have someone each week in the comments imploring the team to call up Fabio Castro.

And isn't it that sort of thing that keeps us in love with the game?
Posted by Tao of Stieb at 9:52 AM

What has Barajas done this year to make you think he deserves a raise over his 2.5 M salary.

If a team loses a bat through trade or injury, they may be interested in picking up Millar simply as an extra body or bat off the bench, especially for after September 1.

Barajas is fourth amongst MLB catchers in RsBI with 37 (more than Posada, McCann, Pudge, Napoli) and handles pitchers well. If he doesn't get offers for more than the $2.5 M, we'd be surprised, although we're not expecting him to double that number or anything.

Won't you please indulge in wild speculation about the Jays picking up some big names at the deadline? That's what blogs are for.

I hear they are getting David Cone and Rickey Henderson!

I fell asleep before I even got to the end of my own post!

Hey Tao, enjoyed your comment over to our boy Knudson. I'm the Chris over there begging him to make a wager. Dude's gotta have some coin he's willing to put up since he's 100% positive Halladay is getting moved THIS YEAR. What a dick.

Yeah, it's a bit of a larff over there with that joker Knudson.

Incidentally, his career ERA at Skydome is 9.53, so maybe there's a reason he feels such ill will towards the city.

I have gone beserk for Castro in the past, but really, I'm assuming he'll be brought up as rosters expand at the end of the year so the Jays can see what he's capable of. I can live with that, especially since writing passionately about a man named both Castro and Fabio isn't in my best interests from a Google Search perspective.

Man, would it be awesome if the Jays were buyers at the deadline. Nick Johnson! I'm tellin ya!

The biggest question of all is how the hell do the Blue Jays make B.J. Ryan attractive to other teams who need a closer? Unless everyone's bullpen collapses, looks like there will be a $10 million dollar mop up guy on the Blue Jays bench next year.