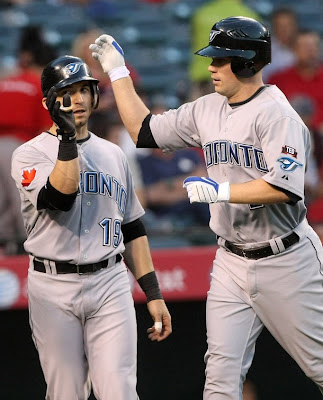 Imagine if we were to have told you in the off season that after the team-wide offensive struggles in the past two seasons (R.I.P. to the careers of Mickey Brantley and Gary Denbo), five Blue Jays would get out of the gate and put up numbers that would rank them amongst the elite at their position through the month of June.

Then imagine that we told you that none of those five players were Alex Rios or Vernon Wells.

Then imagine that we were hopping on one foot when we told you this. (Actually, don't bother with that last one. We were just checking to see if you were paying attention.)

Through the team's first 71 games, the Jays have five players posting an OPS above .800, a mark that only one regular (Wells) and no qualifying batter reached for the 2008 season.

There are caveats, of course. Neither Overbay nor Rolen qualify for rate stats titles at this point given the amount of days they've been given off in spite of relative good health. With Cito protecting Overbay from lefties and Rolen from wear and tear, it's hard to get a real handle of what sort of offensive value they bring over the entirety of the schedule.

Mind you, Rolen's Runs Above Replacement level (RAR) is 20.7, good enough for sixth best amongst Major League third basemen, while Overbay's 17.1 places him between Ryan Howard and Joey Votto in that same category. (Not that we totally understand what any of that means...like Drew at Ghostrunners noted, we're not that good at math.)

Why are the Fab Five so Fab? Raw Power!
Speaking of that two-week old Ghostrunners post, Drew points out the great numbers now being generated from MLBAM's Hit f/x data, and demonstrates that the Jays really are hitting the ball as hard as anyone. When Fangraphs looked at the initial speeds of the ball coming off the bats for the month of April, the Jays ranked just behind Texas and Cleveland as the maddest mashers in the land.

Aaron Hill in particular hits the ball with a particularly awesome level of ultraviolence, sending the horsehide screaming off in the distance at 80.1 MPH, almost two clicks faster than the next Blue Jay, Adam Lind (78.2 MPH).

Perhaps the whistling flames shooting off the balls hit by Hill help explain one of the truly odd offensive stats this season. While Hill has hit 15 dingers to this point, he's managed just nine doubles so far, just two more than Kevin Millar. Hill leads the team with 93 hits, but is it possible that he's hitting the ball too hard, and that would be doubles are turning into singles?

Two sweet blessings rolled into one tonight: the pitchers won't hit, meaning we won't have to watch Tallet at the bat (phew!) and he won't have to face his pitching counterpart, the slugging Micah Owings (double phew!).
Posted by Tao of Stieb at 2:01 PM

I meant no disrespect, my friend. I meant your analysis transcends such artificial constructs such as Euclidian mathematics. You're on another level, I'm trying to say.

No real offense taken. I jest.

But I think what you're getting at is: I fake it so real, I am beyond fake.

I wouldn't at all be surprised to se Dusty forfeit the DH tonight. Micah Owings is his go-to pinch hitter.

Great post, but couldn't you find a better picture of Scoots?

Drew's on some next shit when it comes to the numbers. I have learned much, and have much to learn.

And fuck the National League.

Summer of Tallet! He's dealing! Striking out the side is always a good way to start the game.

Makes a great defensive play and then homers *yawn*

Pat Tabler just said Jays could use Adams at short in case of an emergency.

Does Johnny Mac not exist anymore?

Both Barajas' and Scutaro's homers looked like normal fly balls.

"Vernon Wells: I'm a patient person, but obviously this is testing my patience a little bit. This has been one of the most frustrating periods I've had, because I want to do so much to help this team win."

I have to give it to him for the effort level as of late. He's been making numbers when possible.

Doc back Monday vs TB!!!