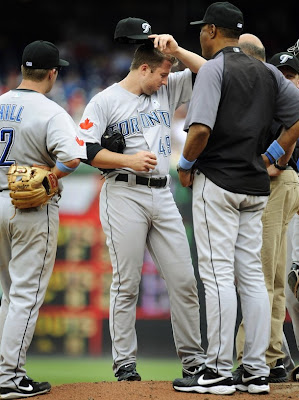 As Jeremy Accardo was yanking himself out of yesterday's 9-4 win over the Nationals, a funny thought occurred to us.

Imagine that you're a pitcher, and that you got left off the roster at the beginning of the season. And imagine that your manager doesn't particularly care for you, and that the outlook for your future with the franchise was less than stellar.

And imagine that you wanted nothing more than to stick it in the ear of said manager and organization and basically rack up some Big League service time on the DL and receive your full big league salary. So you go out and toss a few pitches, then grab your side and presto! Payback and relaxation on the teams's dime!

Actually, we don't imagine that this is what Accardo is doing, and we're not just saying that because we don't want to get sued. It was just an odd thought that crossed our mind as we saw this unfolding yesterday.

But did you see Cito shaking his head in disbelief on the mound after Accardo said he couldn't go? Classic.

We'll take a win where we can get it
While giving up walkoff wins to the lowly DCers was somewhat less than optimal, yesterday's win provided a least a bit of an antidote to what could have been an awful weekend. The entire lineup (or at least the first six guys in it) looked great at the dish all day. Rios, Rolen and Overbay continued to swing hot bats, while Adam Lind worked a couple of walks that led to runs and Vernon Wells hit his second extra base hit in as many days. (Could he possibly be coming around?)

Meanwhile, RR Cool Jay got in and out of jams over seven innings, leaving a line (8 hits, 6Ks, 3 BBs, 2 ERs) that looks a lot better than the performance felt. It took him 118 pitches to get through 31 batters, and were it not for a couple of stellar defensive plays behind him, it might have looked ugly out there.

(What the fuck...why are we quibbling about quality starts and wins? Are we going to call Wilner tomorrow and talk about how awesome Reed Johnson is?)

Off days are for watching the smoldering remains of your computer
Fuck me. Everything I touch turns to dust.

It could be the power supply unit. It could be the motherboard. Or it could be both. Whatever the case, we'll be passing the hat for anyone who wishes to contribute to the Tao's Emergency Computer Repair or Replacement Fund. (There will be no tax receipts. Sorry.)
Posted by Tao of Stieb at 3:43 PM

When the likes of Bill Murphy made this team before Accardo did -- something was seriously wrong. Accardo proved this past week that he should have been up a long time ago.

To be fair, it took a month or so into the season before Accardo really pitched well in LV.

But he probably should have been up before now.

Also: Jesse Carlson's fairy tale story is pretty much over. We fully expect him to be pitching for someone else's AAA team at this time next year.

" It took him 118 pitches to get through 31 batters, and were it not for a couple of stellar defensive plays behind him, it might have looked ugly out there."

And with a couple of decent plays behind him, his start looks even better. Rolen should have been given an error for the chopper that he missed, and then Hill let 2 run scores on a line drive in the infield that he easily got his glove on (and had to move very little to get to). I don't care how hard the ball is hit, if you're there that's a play you have to make, and especially one that you can't let get by you and the two runs to score. I'd have given Rolen and Hill errors that inning, and even just one makes the 2r Romero gave up unearned.

Don't get me wrong, he certainly did not have his sharp stuff at all and the defense DID make some really nice plays behind him, it just could have been better. If that's what Romero is going to look like on his bad days, sign me up.

And Jesse Carlson needs to be on OUR AAA team RIGHT NOW.

The really weird thing about this Accardo injury is that Bastien is calling it cramps and dehydration now. If you want some crazy half-baked speculation, here it is: Maybe he's a bit of a partier, and JP and Cito don't go for that kind of thing, because it can lead to being dehydrated and cramping up in the middle of a game.

Seriously, how does one get dehydrated when there is a few hundred gallons of gatorade, vitamin water, etc. readily available?

he's a partier, so they punished him by banishing him to vegas? maybe accardo didn't get a raw deal

if you want to bring it to my store, ill figure it out.
--out of my element

Accardo didn't do well last season, or this spring or beginning of the season. His Split wasn't dropping at all so he basically kept throwing fastballs and sliders. I don't think his slider was deceptive enough for people to chase all the time so it basically boiled down to fastball.

I do agree Accardo should have been up earlier, but with the way he was pitching and the Jays not having any options left for him, they had to be damn sure they wanted him on the roster before they did anything.

yeah, accardo looked good last week, which is more than can be said for anyone else in the pen.

I think that thing about him abandoning his splitter was a myth. It was just getting whacked around, and maybe it didn't look like one when it was flat. But he kept throwing the damn thing at almost the exact same rate.

Accardo wasn't like his 2007 self since 2007 guys. Maybe he partied hard, who knows but the Jays need pitching help. That cramp excuse sounds like classic JP horseshit!

Accardo gets a big league salary even while in the minors. He only has a one-way contract. Bart Given explained it in his blog.

Yep, Accardo doesn't need to be in the majors to earn his pay. He makes the same amount no matter where he is. I highly doubt that he would have himself pulled from the game for no reason. He is excited about being back in Toronto and wanted to prove to everyone that he does belongs here. He'll be back in a few days and probably pitching through pain to fight for a spot in the pen for when Downs comes back.