What Comes Next(?) - The Starting Rotation 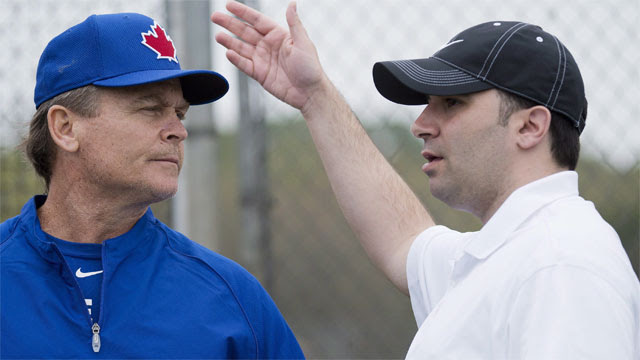 Last year around this time, there was a notion that no matter what happened in 2013, it couldn't possibly be worse than what transpired in 2012. Which just goes to show you that there are a thousand shades of misery.

As the season concluded last year, there was significant discussion about the "crisis of consumer confidence", and the impending doom for the franchise unless something dramatic occurred to provide the fans with something resembling hope for the future. And then it all happened within the space of a few weeks, and there was tangible excitement and newfound aspirations. And ticket sales. And press conferences.

Proven players and veteran presence and spending to be contending. Everything you could want and more.

But as we'd soon find out, it doesn't take much time for plans to go wrong. And we're chasing another ghost of a chance.*

The dilemma we as fans now face is understanding how you take a dramatically remodeled franchise with designs on perpetual contention that has been an abject failure, and tweak around the edges to regain that footing.

Without question, the biggest disappointment this year has been the starting pitching. Injuries and ineffectiveness have essentially led to two of the top three starters - Josh Johnson and Brandon Morrow - being below replacement level and required much support from understudies who were on no one's radar before the season.

(If you figured that Todd Redmond would provide significantly more value than Morrow, then I'd like to borrow your crystal ball.)

Moreover, R.A. Dickey has looked like a back of the rotation starter for much of the season, and given his age and nagging injuries that have seeming affected his ability to throw the knuckleball as he did in his 2012 career year, one can hardly pencil him in as a number one or two starter for 2014.

The Jays' 2014 rotation will likely include Dickey, Morrow and Mark Buerhle, who has had a season which was as good as you could expect. But to seriously contend in 2014 or 2015, one would imagine that you'd be looking for at least one if not two pitchers who would slot ahead of them in the pecking order.

There's precious little frontline help for hire among free agent starting pitching. The top options among pitchers under the age of 32 would be Matt Garza, Tim Lincecum, Ricky Nolasco, or Edinson Volquez, and while none of them scream out "staff ace", it is likely they'll look to be paid as such. Which means that the Jays would likely have to overpay wildly in order to land a pitcher who might be a number two starter if all goes well, or possibly a three or four in most scenarios. Which doesn't really address the crux of the problem.

We can cast our nets out into an ocean of dreams filled with unlikely trade scenarios, but considering the number of prospects that were sent out the door in order to land the mid-to-back-of-rotation starters that we now have, it's hard to imagine the package that could be constructed to tempt a team into trading Cliff Lee, or someone like him. (Note to file: There's no one "like" Cliff Lee.)

We can also hope that Marcus Stroman and Sean Nolin are ready to step into a prime time role next season, but that's a lot to ask of any rookie pitcher. While both of them have shown promise in the minors this season, we're not exactly talking about the next Dwight Gooden or Steve Carlton stepping into the big leagues.


Beyond them, Aaron Sanchez is probably still a year away, and Roberto Osuna might be two years away, given his recent injuries.

There are two starters returning from a year of injuries in Kyle Drabek and Drew Hutchison, but if you presume a certain level of ineffectiveness coming off a UCL replacement surgery and rehab, they might slot in at the back of the rotation if not the bullpen or in Buffalo.

And what about one-time staff ace Ricky Romero? I'd be surprised to see him in a Jays uniform next year.

So what does that leave in terms of options? There are some older free agents who will be on the market, including former Jays Roy Halladay, Chris Carpenter and A.J. Burnett. (And how odd is it that the last guy on that list would seem to be the more desirable option?) Maybe it's overly cynical or self-critical to say this, but I would imagine that none of those three would be clamouring to return to Toronto.

Another intriguing option would be Johan Santana, who hasn't pitched since August 17th of 2012, but who is still just 34 years old and has the pitching smarts to be a top starter if his body can keep up its side of the bargain.

I'm also a bit intrigued by the impressive performances of the Rockies' Jorge De La Rosa and Jhoulys Chacin in what are typically inhospitable conditions for pitchers, but again, we're talking about players who would need to be acquired and who might not be much better than a number three.

Beyond the personnel on the mound next year, there are two other essential pieces worth considering: The pitching coach and the starting catcher.

It's hard to know how much of this season's poor outcomes can be pinned on Pete Walker, especially when it would seem that none of the issues with Dickey or Morrow could be coached away. While I'm not advocating it, firing the pitching coach might not be out of the question after this season, especially after this week's announcement that manager John Gibbons will be back for 2014. It seems unlikely that the entirety of the coaching staff would return intact after a season like this.

And while I'll admit to be a bit dim and unclear on where Walker's responsibilities end and where those of Pat Hentgen begin, the success of some unheralded bullpen arms at least raises the notion that maybe there's a qualified and popular successor on the staff now.

It's also unfair and a bit presumptuous to say that the starting catcher had a negative impact on the rotation this year, even as unpopular as the incumbent in that position has become. But J.P. Arencibia's bat might not be good enough to keep him in that role going forward.

We could dream on bringing José Molina back to Toronto to frame pitches and steal strikes like a masked bandit, though at 38 years of age with that body, it seems hard to imagine getting 100 starts from him in 2014.

On the younger side of the equation, we're all anxious to see what A.J. Jimenez can bring to the table, and seeing him up close might be a highlight of the final weeks of the season. But can we presume that he can be an above-average game-caller in his first year in the bigs, supposing he even makes the team out of spring training? Seems like a tall order.

There are no simple answers when it comes to improving the Jays' rotation for 2014. But it's hard to conceive of a 90-win team in Toronto unless something notable happens to change the makeup of those five roster spots.

-----
*That's a paraphrased lyric from Calexico's "Service and Repair". I've listened to that song a lot lately.
Posted by Tao of Stieb at 1:08 PM 5 comments: