Happy Mondays - A few pleasant thoughts to start your week 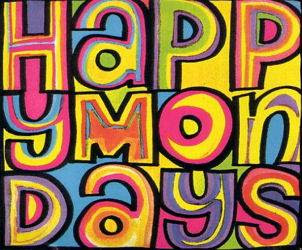 Aaron Hill is historically knocking the snot out of the ball
Noted racist and reluctant Parkes interview subject Aaron Hill is making up for the time he lost last year after getting brained by some scrappy infielder with more heart than brains. Hill cranked out two more homers in yesterday's 5-4 loss to the Phillies, moving him past his own previous best, and past Roberto Alomar for the single season Blue Jays record for homers by a second baseman.

Speaking of the new mark, the Globe's Jeff Blair blogged that Blue Jays fans showed an embarassing lack of excitement and decorum by failing to acknowledge the moment by calling for a curtain call. He snaps that Jays fans will lose their minds cheering for free pizza, but can't be bothered to acknowledge this new milestone. Which is fair enough, we suppose, though we don't know if there was a big deal made about this in the house as it happened.

Maybe the fans could have recognized this historic moment by doing the wave. Because you know you would have had buy-in for that.

Doc is back. And not a moment too soon
We're thanking our lucky stars that Roy Halladay will return to the lineup tonight, just as the Jays are about to dig into the most arduous part of their schedule. After spening the early part of the year playing just about everyone but their divisional rivals, the Jays will face off against AL East opponents in their next five series.

While some of the rotation replacements have performed admirably this year, any extended period without Halladay would be disastrous from here on out.

Rick Romero's rolling
There wasn't a lot to cheer about after Friday night's 6-1 win, what with Jayson Werth swatting balls into the 500 level on Saturday and Johnny Mac getting picked off to snuff out a ninth inning rally on Sunday. So thankfully, we have Ricky Romero's outstanding start on Friday on which we can reflect. After getting lit up in his first two starts back from his sneeze-induced DL stint, Romero has been nails this month.

ESPN's Buster Onley notes that Romero's killer changeup has baffled hitters thus far, with some wondering whether if it is actually a Valenzuela-like screwball, or even a forkball. Whatever it is, it seems to be working. For the month of June, Romero went 3-1 in five starts with a 2.36 ERA. Opponents have managed just a .599 OPS off Romero this month, and he has 33 Ks (versus 10 walks) in 34.1 innings.

Credit where credit is due
Future lawyer and Jays cheer squad dancing inferno Katy Unger speculated via tweet as to whether if any Jays would step to the plate with Michael Jackson playing in honour of the recently deceased King of Pop. While we poo-pooed the notion, Ms Katy nailed it when she figured that Vernon Wells would be the one to do it.

Wells walked to the plate on Friday with Jackson's "Don't Stop 'Til You Get Enough" playing, which is one of our favourite MJ songs and a fitting tribute. Nice call, Katy.
Posted by Tao of Stieb at 9:33 AM

I read Blair's post and shared the same sentiment as him, but I highly doubt that fans at the Rogers Centre knew that Hill broke the record.

The "We Want Pizza" chant is something that I've come to expect at a Jays game, but it's not every day that you see Aaron Hill hit two HR's in one game.

Have you read Blair's latest where he mentions he believes the Jays are willing to trade Rios and Wells for anything (Good luck with Wells). He also mentions the jays are nearing a serious revenue crunch.

It's probably not a surprise that they'd be looking to move those contracts, although I think he's going a little over the top with Rios.

I think it has been obvious to anyone watching that the team is going to run into some trouble with revenue this year, although they are not papering the house as they did in past years.

Nevertheless, they are down about 6,000 people per game to this point. Which is a bit scary.

They made an announcement after Hill hit that homerun, and people stood up to clap, but he never came out of the dugout.

Most fans had no idea Hill broke the record until they showed it on the jumbotron as he walked to plate in his next AB. By the time most people had caught on he smashed that no doubter.

It's a bit of a weird complaint from Blair.

And besides: Do we want to become like the Red Sox fans who were giving Big Papi curtain calls after every homer he hit for a few weeks?

I was at the game, and unfortunately the Hill situation was the least embarrassing thing about the fans...the other anonymous poster was correct that they did nothing at the time of the HR to let people know what had happened...and I don't think they even announced in his next AB. but simply put a graphic on the Jumbotron, and he smashed another one before everyone even clued in...BUT there should have been a decent amount of informed fans there who would let people around them know what they were witnessing...

As for the "We want Pizza" chant, I can't get too riled up because it's kinda funny and at least they are cheering for something that is happening IN THE GAME (even if it it for selfish reasons)...unlike...

- Cheering for free stuff louder than at any key point in the game: Is that crappy free t-shirt/towel/cap REALLY that much more important than if the team you supposedly care about gets a hit or strikeout they desperately need to, you know, WIN THE GAME?...but this pales in comparison to...

THE WAVE: I can't possibly put it better than others already have here and at the Drunks, but to be at the game & have to sit and watch people go insane over the wave making it around the stadium in a crucial moment in a 5-4 game is so mind-numbingly embarrassing, disgraceful, and frustrating that I literally put my head down in shame...WHO ARE THESE PEOPLE? I understand if you've got your kids there that you may get sucked in, but aren't there any BASEBALL FANS that go to the game? The reaction to the wave is BY FAR the loudest thing you will hear at a Jays game...

I love my team and don't hide it, but these rubes make it embarrassing to be a Jays fan whenever I actually get to see a game live, and that's a damn shame...

i don't want to Step On your post here tao, but I think blair's overstating things a little. blair's Stinkin' Thinkin' is that sports fans should know how many home runs not only hill has, but every other second baseman in bluejays history. i don't think it's a case of Lazyitis if one doesn't know that. the 24 Hour Party People at the dome just aren't going to have that at the top of their minds. most of them are just thinking "Hallelujah, hill hit two dingers, and that guy with the Kinky Afro hit one!"

i also don't think the fans are all thinking "Cut 'Em Loose, Bruce" when it comes to rios and wells, although it's also not all Sunshine And Love either. when they hit well the fans are thinking "Bob's Yer Uncle". when they do poorly, like wells is now that's when the fans get Mad (Cyril).

I'm pretty sure Wells came to the plate with a different MJ song playing each at bat.

Ownership is getting the fans they deserve. They're in a division with Boston and NY and wouldn't go over slot until this year. There's a question as to whether or not they'll re-sign Roy. They love the unbalanced schedule because it means an attendance boost when NY and NE douchebags visit. Ownership, in fact, is directly opposed to anything that would get this team into the playoffs.

Blair's upset because the fans didn't properly applause when Hill broke the HR record for Jays second-basemen? To me, it just hits home that WE WENT FIFTEEN YEARS BETWEEN DECENT SECOND BASEMEN.

As it stands now, I honestly wonder if they'll even offer Roy arbitration so we'd get the pick. These same cretins didn't do it for Delgado. Everyone else in baseball gets to see their best players stick around - not here though! The landscape is so different. We don't get Gwynn, a Ripken or even a Biggio or Helton. See ya, Doc! No wonder people are chanting for their free pizza. Rogers at least wants the pizza to stick around.

It's good that columnists are asking why the fans can't do more. As if they'd put a single fucking cent back into the team if there were nothing but sell-outs from here till the end of the season. Don't let the improbable, like Tallet and Richmond panning out, color anything - this is some of the worst goddamn ownership in sports.

Funny thing about Gwynn, Ripken, Biggio and Helton: One World Series ring amongst them, and it came in Ripken's third season.

Also, those guys are the exception now. Unless you've got the Yankees or Red Sox payroll, you're going to flush out some veterans to save money, and that goes for pretty much every other team in the league.

And they'll resign Doc. They're not going to just let him walk.

As for Nick Johnson, I'd like the move, but only if they didn't really have to give up much.

In between Alomar and Hill, there was O-Dog. And Carlos Garcia.

Your efforts weren't lost on us at all.

Although to be honest with you, we kinda prefer the first Black Grape record to any of the Mondays' stuff.

Shake Your Money would be a good Friday Rock Out some day.

Whoops, right, forgot about O-Dog, thanks Tao. I just got madder and madder about Roy the more I typed.

Blind anger and general hungover obliviousness has tripped us up on more than one occasion.