How low can Vernon go? 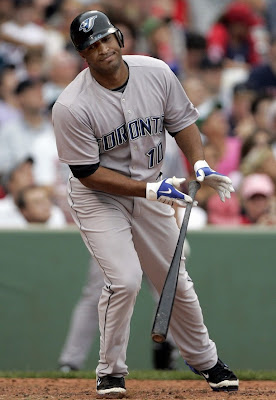 There seem to be two camps out there when it comes to Vernon Wells: Those who can't possibly hate the player and his contract any more, and those who have assured us all season that he'll turn things around and re-establish himself as the team's best hitter.

We probably have been in the latter group for most of the season, but we're getting perilously close to a tipping point in the season where we stop thinking of this as a bad start and start looking at it as a bad season...or worse.

In the 32 games since Vernon Wells last hit a ball out of the park (May 6th versus Anaheim), he has posted a .574 OPS and driven in a grand total of seven runs in 134 plate appearances. Each one of which, it should be noted, with him hitting fourth in the Jays batting order, just to beat that dead horse again.

And dare we mention that Travis Snider was exiled to Las Vegas after posting an OPS of .686 in 108 plate appearances? If that sort of performance merits a demotion - and it did - then shouldn't Vernon receive some sort of demotion himself? Like maybe a week or two of hitting seventh or eighth in the lineup?

Most importantly, the Jays have gone 14-18 in those games. We'd hazard a guess that not many teams would do much better with their cleanup hitter putting up numbers that could be bested by the fourth outfielder on their Triple-A team.

Several times over the course of the year, we've figured that Vernon hit bottom. When you hear enough thuds in the run of a season, you imagine that Wells couldn't go much lower, but we're coming to realize that what we're actually hearing is Vernon falling out of the Shitty Tree and hitting every shitty branch on the way down.

We're pretty much stuck with Vernon Wells for the long term, so there's not much that we can do aside from hoping that he addresses the issues that he's having at the plate. We see a lot of up-and-down hand movement in his swing, something that probably contributes to the fact that he rarely hits the ball squarely.

The larger question, especially for the Sports and the City blog, is whether or not there is a Hatred Level on their Advisory System that exceeds Severe. Because we may need it.
Posted by Tao of Stieb at 10:54 AM

Email ThisBlogThis!Share to TwitterShare to FacebookShare to Pinterest
Labels: shitty this and shitty that, Vernon Wells

It's just more frustrating now than anything. We were told for years that Vernon started cold and got hot as the season went on, and for the past couple it's been the opposite, or he gets hot just as it's too late. Sometimes I think he has a problem with pressure, but that can't be the case.

Say what you want about Gibbons, he had Vernon hitting 9th when he wasn't producing, correct?

Wilner was on The Fan this morning and apparently Cito will consider making a lineup change if things aren't improving "a month" from now.

Well then...when it comes to taking corrective measures to address the team's problems, I guess there's no time like the vaguely distant future.

July is when the sched. gets AL East heavy. I'm with Cito, let's give Vernon the rest of the month.

And we (well, me) at Sports And The City have too thought about a level that exceeds SEVERE. Wells is doing his damndest to break the Hatred Advisory System.

A month? That has to have been a "best of Wilner" from a year ago, because right now they are within striking distance but NOT making up ground, so yeah, NOW'S the time to wait.

The lowest that Vernon has been slotted into a starting lineup since 2006 was fifth.

Gibby did move him into the leadoff position for the last bit of the 2007 season though.

Tao: Thanks. Maybe it was Rios batting 9th once that kinda stuck in my head...probably wrong there also.

Either way, the essential point that I think we're agreeing on is that cleanup is not the place for him.

I seem to remember VW making a decent go of it in the leadoff spot, too. Is that right or am I just just misremembering?

It's always something, isn't it?

This year, the offense (largely) has been strong....and with minimal contributions from the guys expected to carry the weight (no point in naming names any longer).

Fuck, let's it put it all together, Blue Jays. Seriously. Before the goddamned needle breaks on the VWHAS.

In other news, in today's Globe and Mail, Rick Salutin's column touches upon Cito, the Jays, and other things.

The best argument for moving Wells down is breaking up the R-R-R-R logjam with a lefty.

BTW, I would love to taste Well's log jam. I am sure I could suck the tension out of him.

If you want the jam, you have to go to the source- his Papa.
Anyway, having Vern bat leadoff again isn't a bad idea- added pressure to get on base (he has speed this year) but less pressure to knock in runs.
what about this?

Good speed 1-3 and power 4-6. It's just hard to move Scut around as he has been consistently wicked. And hopefully Rolen can get rolling again.

I'm going to the game tonight, I think he's going to hit it hard.

Hey all,
I've started a new blog called QJays. No big posts or rants (just yet), just game related questions to let commenters discuss and see where it goes.

there are no stupid questions, just stupid games

I'm in the same boat with you Tao. I've constantly believed that it's just a slow start and will get better. It's the middle of June and it's still slipping. EVERYONE PANIC!

I just don't have it in me to defend him anymore.

Wells was never the same after Carlos Delago left. Every great team has a premier hitter to anchor a line up. The Jays have the right pieces, but they need that dominating bat. Once this happens, you will see a huge improvment in Wells and Rios at the plate.

My theory is that Wells is still recovering from that broken hand/wrist last year. It has sapped his power (remember Overbay?). Wells needs to work really hard on strengthening his old injury. I still think Wells should re-make himself in the meantime. He needs to lose weight and maximize his speed in the outfield and on the bases. He needs to see more than 3 pitches an at bat. His ability to hit fastballs has decreased because he is so aggressive on them. The pitchers know this and throw fastballs that are a little out of the zone. Wells is extending the strikezone to chase these fastballs. He needs to have better strikezone judgement and work the count better and focus on hitting line drives. You can see this at Fangraphs.