A Lindinger of a game 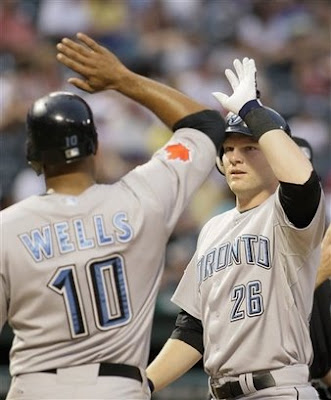 We always figure that there is some sort of punny fun to be had with Adam Lind's last name, and yet, that title is the best we could come up with. But given the way that Lind is playing lately, we'll have plenty of other opportunities to make kinda lame jokes while praising his awesomeness.

Lind's pair of two-run homers were pretty much all of the offense that the Jays needed last night to put them over on the Rangers 6-3. (Although that extra pair of runs was very much appreciated, so thank you very much for going and getting them, fellas.)

After a slightly tepid May (a .786 OPS), Lind has cranked it up since the turn of the calendar page with 14 hits (five doubles, three homers) so far and a 1.448 OPS in the first week of June. He leads the AL in doubles and sits within the top 15 in hits, homers, RsBI, slugging and OPS.

With the ongoing struggles of Vernon Wells and the recent skids of Aaron Hill and Alex Rios, it's hard to imagine what this team would be doing without Lind's contributions.

Vernon Wells Sr. is as fed up with Junior as we are
We wish we had a screengrab of Vernon Wells Sr.'s reaction to his son's strikeout looking in the 8th last night, because it made us feel a little less bashful about letting his son have it on the blog a few times per week. With Alex Rios standing on second in a one run game, Vernon Jr. watched a fastball come straight down the pipe, leading his old man to throw up his hands in frustration.

Papa Wells: We feel your pain.

As we move into the middle of June, we're starting to ask ourselves at which point we stop thinking of this (.690 OPS, 5 homers and 28 RsBI) as a bad start and when we start to look at it as a bad season. We're willing to cut Wells more slack than he probably deserves because June and July have traditionally been his hot months (.858 and .909 OPS respectively over his career).

But the clock is ticking.
Posted by Tao of Stieb at 9:44 AM

Sometimes we see athletes who underachieve, and then once they're moved to another team, they start performing again. Might this be the case with Wells? Would a change of scenery be the cure for what ails him? As affable as he might be with the media, the weight of being 'the man' on this team might be finally wearing him down even if he never showed it on the outside. Not that any other team would be crazy enough to pick up that contract, but perhaps this is another reason to find that 'big bat' that can be the threat in the lineup. If Wells can't be moved, find someone to take the pressure off him. Definitely get him the hell out of the cleanup spot - what more does Lind need to do to justify hitting fourth?

I am not ready to totally write Wells off. The guy is clearly not a 4th hitter and I think we've all known that for awhile. Let's move him into the 2 hole and bump Hill to 3rd with Lind going cleanup and Rios 5th. Wells gets on and he's stealing a lot. I think this might also help his avg. a bit as he might see more fastballs with Marco getting on in front of him. Just a thought.

Hell, we'd consider him leading off with Scoots hitting behind him.

Leave Wells in the cleanup spot for the rest of this series in Texas. Let's not move him while down in Arlington. If he doesn't get it going by Friday, please, for the love of all things holy Cito, bat Lind cleanup.

Re: Stonedog - Can't trade him now, Massive low point we would get nothing but a salary dump and even then I bet we would have to retain some of his salary to make it work.

You know it's getting bad with Vernon when even Wilner says they need to move him down in the lineup. I'm with eyeB, give V-Dub till the end of this road trip and then move Lind up to cleanup, Overbay into the five hole and Wells somewhere below that.

Vernon, can't you see how much we want to love you?

Completely unrelated.....anyone know anything about the status of JP Arencibia? Neither him nor Snider have played the last few games down in 'Vegas. Snider appears to be banged up, since he is listed on the 7 day-DL, but Arencibia's name doesn't even appear on the 51's roster (when browsing through bluejays.com) at the moment.

If you want to take advantage of Wells' speed, the two hole is the worst place for him. The powerful hitters in the heart of your order can drive in runners from first, so you don't want to risk a runner getting thrown out when they're at bad. It's better to put a base stealing threat in the 5 or 6 slot so the weaker hitters at the bottom of the lineup, who hit primarily singles, have a better chance at RBIs.

@ myself:
evidently taking a few days away for some family time.

For all of the faults that we find with Wells, he's a pretty good baserunner who is smart and aggressive in taking an extra base, and who could score from first on a double or from second on a single, or can move up on a ball in the dirt.

It's the one part of his game that is hard to find fault with at this point.

As long as BJ Upton and David Ortiz continue to have their OPSs in the shitter, I can somehow tolerate Wells' atrociousness. I take solace in knowing other teams in the division are sharing in our pain, and it provides me with the patience that we need to get through this. Vernon Wells is hitting worse right now than he did all year in 2007 with a torn shoulder, so I'm going to go out on a limb and say that if he's healthy he may not post another month under an .800 OPS.

Oh lord. This is going to get worse before it gets better.

"Jays DH has plenty of power to Lind out"

What, is "A Mighty Lind" too obvious?

Lind in the Willows?
This Lind is my Lind?
Vernon Wells to teammate: "Can you Lind me some homeruns?"

We need Gay Jays Fan to come and shut down the thread with some of his explicit homosexuality.

I actually agreed with Tabler on that Vern strikeout, he was looking for something offspeed and the fastball came.

For a while I thought this was a weak excuse (two strikes, be ready to swing at everything!!!) but Gregg Zaun did a great look at Manny's hitting philosophy in last years playoffs (which is much like Cito's) and noted that Ramirez will do the same thing Vern did last night. Look breaking ball, not get it, strike three looking.

I don't know, though. With two strikes Scutaro seems to be able to get the bat on whatever he wants.

Well, with two strike, I think I'd look fastball and try to foul off the off speed stuff.

But then again, when I played, I just went up hacking. Because I was 11.

Looking at Marco and Wells the two have completely different styles and swings. Wells has a very long swing where Marco has a short punchy swing. Real big reason why you see Marco go the other way with so many pitches and the same reason why when he does hit a HR he looks like he's going to fall out of the batters box.

Wells will get it going soon enough. 2 hole!