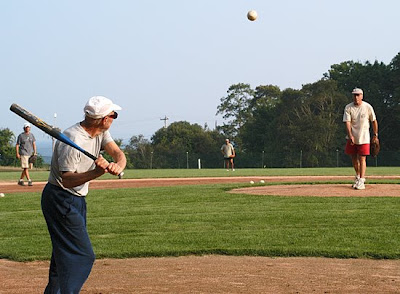 Hey kids! This is the first in yet another special series of posts, in which we lob in three soft and easy questions at a member of the traditional mainstream media and see if they respond. In this edition, we tossed a couple of easy ones in the general direction of the Las Vegas Sun's Ryan Greene.

Greene is covering the Las Vegas 51's this season and has penned a couple of interesting profiles on the recently sent-down Jays prospects, including last week's story on Brett Cecil, and a new story in today's edition on The (once and future) Great Big Giant Pasty White HopeTM, Travis Snider. Also, he's a fan of Buck Coats, which makes him alright in our books. Greene answered our three nice and easy questions via email.

Have you noticed any significant differences since the 51's affiliation switched from the Dodgers to the Jays?

If anything, I think the local support for the club has taken a minor hit. People still show up because it's affordable entertainment and it's baseball. Plus, $1 beers on Thursdays bring in tons of fans (and college students). The thing is that the Jays had the misfortune of following the Dodgers in terms of affiliation. A lot of Dodgers fans live in Las Vegas, and therefore went to watch the Triple-A club. Unfortunately, there aren't too many maple leafed flags flying out and about in the desert ... which I find to be a damn shame.

We're a little concerned about our young impressionable prospects being in Sin City. Tell us which is the biggest hazard to a young ball player: The gambling palaces, the nightlife, or the cheap buffets?

You know, it's hard to get a read on that. For the most part, I think these guys are pretty responsible while out here. There's enough established veterans, such as Jason Lane, Randy Ruiz and Brett Harper, who keep them in check. I mean, obviously a lot of Triple-A ballplayers don't make a ton of dough, so going out clubbing, chugging watered-down $12 drinks and gambling until 5 a.m. is not only ill-advised, but maybe not even affordable. But for some of the younger guys (Cecil, Snider, Arencibia, etc.) and especially guys on the 40-man, I'm sure they get out there and have their fun. But, thankfully, none have turned up in the police blotter. And if any of them are sinning a bit excessively, I'm sure their manager -- Mike Basso -- puts them in place. He comes across as a no-nonsense guy. I know I'd hate to show up to the ballpark hungover and have to deal with his potential wrath.

So aside from the obvious prospects and the "AAAA" veterans, which of the younger 51's have impressed you so far this year?

Well, I know he's one of the Jays' top prospects, but he doesn't get much pub. That said, I really like catcher J.P. Arencibia. His being in Triple-A this season is mostly for defensive purposes, and that was made clear before the season. He knows how to hit, and has proven it at each level this season. So far, he's only hitting .236, but he has 8 homers and 30 RBI and when he gets hot, he's tough for pitchers to work. Defensively, handling a veteran staff is doing wonders for him this year, I think. He's also shown good speed, I think, for a catcher. Kind of in the Russell Martin mold.

In the lineup, Kyle Phillips and Buck Coats have also stuck out to me. Phillips, a steady third base prospect, is hitting .330 since his promotion from New Hampshire and is aggressive in terms of just getting contact. He's 25, and Coats is just about to turn 27. Coats is no pup, and has major league experience, but I've fallen in love with his game. He's pretty solid defensively in center, and I love watching aggressive leadoff hitters, which he certainly is. He can hit ropes into the gaps, and he's done it regularly. He's hitting .322 with 22 RBI and 14 stolen bases. He's tied for second on the team behind Arencibia with 14 doubles.

On the staff, I think the organization, got a great steal in Fabio Castro, who they acquired late last season from Philly for Matt Stairs. He's 2-1 in 7 starts since his promotion, with a solid 2.30 ERA. Plus he's a lefty. What's impressed me the most is his ability to work out of jams. It doesn't appear to faze him. He had a scoreless inning streak of 24 right after getting the call-up, and worked out of several pickles in maintaining it. He's kinda smallish in terms of stature, but his stuff is legit.

For more from Ryan Greene, please have a gander at - Mature beyond his years, Snider transitioning back to minors, Las Vegas Sun
Posted by Tao of Stieb at 9:51 AM

Great interview, Tao. Thank god I'm not a major league ball player, because I would've come up on the police blotter my first night in Las Vegas.

Look at you, all journalistic. Good work Tao.

kudos to perry dude or whatever his name was for not mailing it in on those responses.

poor effort on the post on my part tho'.

....and congrats to John Tolisano for his first (and last if he doesn't get his act together) "player news comment" on Rotoworld.

I think we would all be pretty naive if we didn't think that our AAA players weren't having a lot of fun in Vegas. Even the "poor" players are gambling, at the strip clubs, out partying, buffets, etc racking up their credit cards because they think they will be making millions in a few years.

Hey, a little "journalism" never hurt a blog, did it? It can't all be dick jokes and catchphrases.

Speaking of which: FREE BUCK COATS!

Tickets are only five fucking dollars tonight, for 500s and 200s in the outfield.

Good read, Tao. Good idea to reach out and get some inside info.

Fabio Castro: he may be short in stature, but he sure ain't short on heart!

Between Fabio Castro and Tim Collins, it seems like the Jays are going to have themselves an itty bitty pitching staff at some point soon.

In his milb profile picture, Tim Collins looks like he would enjoy nothing more than to punch you right in the fucking mouth.

have the jays signed the old codger in the picture up above to bat cleanup tonight?

Enjoyed the first of I hope many more media dealings, Tao.

i hope Arencibia makes it up the majors this year. the Jays need to find out if they have something there.

What happened to the game threads? Did DJF send some hired goons by the house?