Running out of superlatives 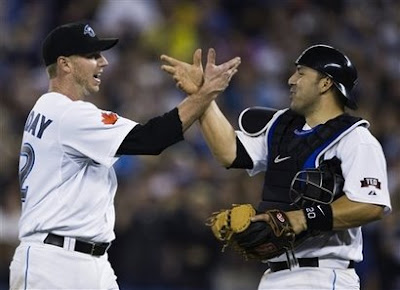 It's just June, and we're not sure that there's much more that we can say to describe just how otherworldly Roy Halladay's pitching has been this season.

Even after being given a rough ride in the seventh inning of last night's 6-4 win over the Dirty Filthy Fallen Angels of Southern California's Los Angeles Metro Region (Anaheim Municipality Division), Halladay regrouped and finished the game off for himself, striking out 14 batters (including all three in the ninth) for his ninth victory of the year.

(And before anyone gets all that worked up about Halladay's pitch count, we should all remember that Halladay throws fewer warm up pitches before a start and between innings than most other pitches. So if he tossed 133 in the game, his total number for the night would probably would be on par with someone who throws 115-120 pitches. So let's not lose our shit.)

Drew over at Ghostrunner on First admitted to a certain amount of hyperbole in noting that Halladay's performance in the first six innings of last night's game was the best he'd ever seen of any pitcher, but a read through the comments from the Dirty Angels pretty much confirms just how exceptional Halladay's outing was. (Check the DJF for more quotes from everyone who witnessed the performance from the on-field perspective.)

The thing that we find amazing about Halladay over the past two seasons is how he has evolved from a guy who pitches to contact to a pitcher who can go and get a strikeout seemingly at will. The late movement on Halladay's fastball left a number of Angels staring dumfoundedly at called third strikes last night, with eight of the 14 strikeout victims going down without a taking the bat off their shoulders.

Rod Barajas will run like the wind if you set him free
For the second time in less than a week, Rod Barajas scored from first base. Which we wouldn't believe unless we'd seen it. Rod is a baserunning god.

Game threads
So we didn't tee up a game thread last night, in part because we weren't watching the game live last night. If you kids would like us to set one up as a matter of course, let us now and we'll do it for you. We aim to please.
Posted by Tao of Stieb at 9:08 AM

Halladay is god. No doubt about it!


I see Dirk is getting called up too!

can this pitching staff get any better?

We should never, ever, take Harry Leroy for granted. EVER.

I wasn't even cheering (loudly) watching him toss last night - because much like the Angels, I sat in quiet awe of the master.

Tao, I think a game thread for Thursday's afternoon game would be great. I want to ensure that I get as little work done as possible that day anyway.

After a performance like last night's, we'd hope that the Jays would look to lock Halladay up on a 1000 year contract.

Oh come on Tao, a 1000 year contract is ridiculous. They dont need to go anywhere over 45 years.

How many deer-in-the-headlights strikeouts were there last night. It seem like a lot of Angels just froze on the last pitch. (Can't hit it anyway might as well hope for a missed call from the ump.)

I squealed like a little school girl when he stepped out of the dugout in the 8th and 9th. I was delighted!

Pitch counts are for bitches. Not Roy Halladay.

The guys behind me up in the 500s each were holding letters that spelled "R O D THE B O D." Barajas' running ability, and his svelte physique, are clearly appreciated.

I like your games threads, but I suppose they would suck if you're not there.

Just two guys posting in a game thread...party over here, guy number one!

Rod just needs the time (from first to second) to build up steam...

I was ath the game and thrilled Doc came out for the ninth and my dad sitting next to me was furious. He felt he was overusing Doc and letting Doc make the call. He then muttered, "Cito never could handle pitchers".

But you know, no matter how amazing Doc is, all anyone outside Jays fandom is going to talk about is Greinke. Burns my butt. At least we appreciate him. He won the applause-o-meter last night by a wide margin. See how much we love you, Roy? We can get you a ring. Please stay here for your whole career.