Not every win is going to be pretty 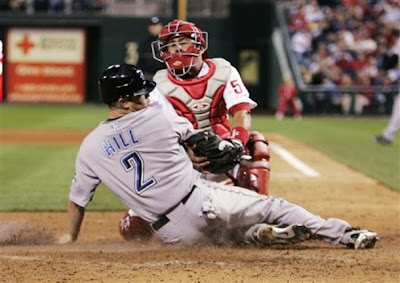 Seriously, what is the point of bitching and moaning about the number of players left on base when you come from behind in the ninth and pull out an extra inning 8-3 win over the defending World Series champs and their ace pitcher?

Win pretty or win ugly...it's all pretty much the same in the end. Sure, the Jays loaded the bases a few times, only to have RR Cool Jay hacking like your drunken uncle at a family barbecue softball game. But we'll give Romero a pass given the stellar performance he put in on the mound (6 hits, 3 earned, 9 Ks and 2 walks over seven innings.)

Two hits, and now it's all sunshine and lollipops for Vernon
Okay, so Vernon Wells is still twitching in the batters box like he's auditioning for Breakin' 3: Digital Boogalee. But let's give credit where it is due: Vernon's infield hit in the ninth and some smartly aggressive baserunning were key to the Jays' comeback rally in the ninth and their go-ahead rally in the tenth.

One more thing on Wells. We were at the game in 2003 when Wells broke the Jays' single season record for hits, and it was on a swing very much like the one he took in the tenth last night: a line drive back up the middle. If Vernon is willing to back off on swinging for the fences and just look to make solid line-drive contact, we believe that he could regain some of the form that allowed him to hit more than 40 doubles and be the centerpiece of the offense again.

Accentuating the positive with Alex Rios
Before you all get your Agent Provocateurs in a twist over the Blissfully Oblivious Gazelle's baseruning gaffe by not tagging up last night on a fly ball in the eighth, can we all remember that he reached base four times last night, scored twice, drove in a run and made a nice sliding catch.

We know that people like to pile on the Gazelle because they think he's stupid or that he doesn't give a fuck, but he had a pretty great game overall last night. The Jays would not have won without his contributions, so don't piss and moan about the alternate universe where they lost last night because of him.

Scott Rolen - Still the Greatest Blue Jay of All Time
You know, whenever we watch Scott Rolen do anything, we just wanna call him "Hoss". Like, "Nice hittin' there last night, Hoss", or "Way to stick it to the douchebags with the seven-year grudge, Hoss".

A note to Scott Downs
Leave the bat on your shoulder. Thanks.

You know what rule we hate? Defensive indifference
We have no stake whatsoever in Chase Utley's numbers, but his moving to second on "defensive indifference" in the tenth last night reminded us of how much we hate that scoring quirk. Whether if he gets to second because the Jays let him or if he gets it because he beats a throw, shouldn't that still get scored a stolen base?

Intentional walks, unless we are mistaken, are still credited the same as unintentional walks, even if the other team is deliberately giving you the base and giving you everything short of an escort to the bag. If Utley took the initiative to take second because they were giving that shit away, so why shouldn't he get credited for swiping the extra bag?
Posted by Tao of Stieb at 9:46 AM

I know Philly fans are notorious for their douchebaggery, but how the fuck do you boo Scott Rolen? All he did in Philly was fucking rake. Idiots.

Did you read Griff's post about the Gazelle? Check 'er out. Awesome. Deserving of a "who gives a fawk?" comment, for sure.

has it been reported Mills for Janssen or are you just saying you would like to have seen that.

Also, I can't believe you guys want defensive indifference to be counted as SB's.

I think we all agree that Rios has amazing talent, but it is starting to show that he is not the sharpest tool in the shed.

Someone has Utley on his fantasy team.

No seriously...I don't have Utley on any fantasy team. I just don't understand why they make the distinction.

Especially since this is a call that is only made in the late innings. If a player takes a base uncontested in the third inning, they'd probably still call it a stolen base.

Brad Mills y'all! How many lefies can the Jays cycle through their rotation this year?

I agree on the defensive indifference thing. Bugs me too. Who the hell cares if they let you or not, you still took it, and if you were slow like a catcher or Millar they wouldn't let you take it as easy because even if you get a jump your only half way down the line.

Rolen Made the Phillies pitchers thrown 37 pitches last night. At the time just after his last at bat they had thrown 197. So basically up to that point he was responsible for them throwing approx 18.5% of their pitches. Awesome.

Agent Provocateurs! The Tao has good taste in drawers.

I gotta give props to Lyle Overbay. I love Scoots and Hill, Rios sometimes, Wells unconditionally, and Rolen's the GBJOAT, but Overbay might be my favourite. What a patient mother fucker.

And Fabio Castro's next.

I might just replace the "One Day We'll Be Perfect" with "The Tao has good taste in drawers" as the blog's official slogan.

I like that the Vernonator tries to do what he can when he's in a slump(or in a fetal position, as he has been lately) and I'm a sucker for good baserunning. But to call his baserunning "key" isn't quite right. He would have made it to third without taking the extra base. NItpicky? Damn right.

stoeten mentioned this a few days ago, but can you imagine watching scott rolen when he had power. fuck me

Brendan: Vernon wasn't on the move on that 3-2 pitch to Rolen. That was fucking fantastic baserunning from V-Dub.

Scott Rolen hits for power in my dreams. Boners. Obviously.

eyebleaf: I didn't mean to imply that it wasn't good baserunning. It definitely was. I was poking fun(lamely) at the Tao, because he mentioned it as being "key" when really, he would have scored whether or not he'd taken third on Rolen's hit. Of course, you could also say that if he hadn't taken third, Lind wouldn't have been walked, and therefore a DP would have been in order...except then you could also say that it took the bat out of the best hitter's hands...but then again having the bases loaded is better than 2 guys on...I'm confused now.

Not to get all intangibly Joe Morganish, but Vernon taking the extra base put pressure on the Phillies pitchers.

The intentional walk and Overbay's walk followed, and I don't think that they'd have approached the inning the same way without Wells and Rolen's scrappy grittitude.

(What the fuck is happening to me?)

Thanks for making me miss Fire Joe Morgan.

I was surprised that there were no sprained toe comments from Mr. Priest.