Nine runs is good for what ails you 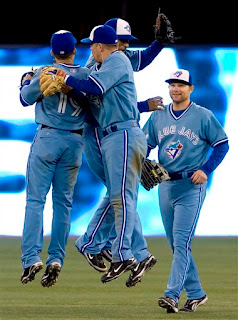 (If the above image isn't the enduring scene to date for the 2009 Toronto Blue Jays, then I don't know what is. Love it. And if you don't - learn to.)

When the Jays were winning games early this season (games they probably should have lost) on the back of Aaron "what a ballplayer!" Hill, I consoled my ever paranoid self by saying:

"Don't worry, self, when Hill eventually cools off, we'll have guys like Vernon Wells heating up to pick up the slack."

Well, it turns out that I was partially correct, if not fully crazy for carrying on such a conversation. I'm not going to pile on Vernon by pointing out his woefully inadequate numbers from the cleanup spot this year. Nope, I'm not going to go there. Not going to discuss it. What I will point out is the fantastic effort delivered by the team's forgotten man, Lyle Overbay.

Overbay delivered two crushing blows (homer, double) in big spots against Royals ace Zack "not Roy Halladay" Greinke. Mix in another big fly from Adam Lind, who is just fucking nailing the baseball these days, and a three double night from Marco (marco) Scutaro (scutaro) - who refuses to cool off, by the way - and voila - Jays win.

Oh, Ricky Romero looked pretty good, too. Dominant, if we can pretend the seventh inning never happened. Performances like those are exactly what the rotation needs. It looks like our guy Arnie must have had one of those "YOU'RE A BAD MAN RICKY. A REAL BAD MAN!!" pep talks with young Ricardo before tonight's game, because he was storming off the mound looking to punch someone in the mouth at the end of each inning (I miss Mencherson).

Yeah yeah, Arnsberg was off attending his daughter's graduation or something.....you've never heard of a cell phone?

Alex Rios mans up
Do we still need to talk about this? You know, the incident where the dickless poser calls out an athlete on the street with absolutely no fear of reprisal?

I mean, I get it.....Rios comes off as a major dick for (a) refusing the autograph request, and (b) dropping the f-bomb (how dare he!)...but seriously, the guy calling him out? What a douchebag. Unless you want to play the "well, Rios makes millions of dollars a year, it comes with the territory" card. Because then you're a jealous douchebag.

Aaaaanyway, team mandated or not, Rios confessed his sins and apologized for his improprieties to the ever attentive media before the game.

Rios acknowledged that frustration with his poor performance Thursday led to the incident.

"It was a long day," Rios said. "I kicked myself, I couldn't help the team win. It was just bad."

So, there. Are you happy now, jealous douchebag? I don't know, maybe I don't care enough about these off-field transgressions, but yeah....Jays win. Dig it.
Posted by The Ack at 11:16 PM

1. overbay has been really good all year, and none of the "fans" mention him at all.

2. I like Rios even more now after that incident. Yeah, he could have signed for the kid, but if some twat calls me out in public like that, I'm gonna lose it too. And to the idiots who think "he doesn't care," isn't it obvious that he does with the way he reacted and all?

Actually Tao, the guy on the street was being what used to be called "a man". He saw Alex refuse an autograph to a kid after, [insert ironic scoff here], a charity event. The guy was trying to shame Rios into doing the right thing. In this world of man-boys, we sometimes forget some of them olde tyme virtues.

Dissension in the ranks? You're all bums. You're bums! Bums, I tells ya! Bums!

Can I get your autograph?

What Alex did was pathetic. Takes 2 seconds to sign an autograph. He's a bum, a bum! His batting average is...

Wait a second: Did Rios refuse an autograph to a kid? Or to some douche collector/seller who was going to take the signed whatever and sell it for 20 times its worth on eBay?

Whatever. It was the end of a long day, and Rios just wanted to fucking go home. I know how he feels.

I don't think there was anything particularly manly about standing on the street and shouting at an athlete.

That's assuming the shouting was premeditated. If it was a heat-of-the-moment reaction to Alex blowing off some kid, then perhaps we shouldn't get so defensive of Alex.

...or hard on the heckler. Either way, I suppose we will never really know the real context of the whole thing.

It was a kid asking. Maybe the heckler was the kid's father. Watch the video, Tao, you lazy bum! I just wish the audio was better, so I could turn it into a Christian Bale-style tribute song.

Watched the video, but I don't see the kid.

Anyways, I don't really care if it was a kid or not. Dude isn't obligated to sign autographs, and I don't care if he does or not.

I just care about what he does on the field.

Speaking of which, where the fuck are the bats today?

I wasn't scandalized by it either. This stuff probably happens all the time, but the YouTube age allows everyone to weigh in on it.

That Dirk Hayhurst blog entry put the autograph seeking thing in context for me.

As for the video, I can't find the good original one right now. Sucks. It also sucks that the bats have gone pretty quiet after kicking Greinke around last night.

Just watched the clip again. The kid is clearly there and clearly ignored. Not throngs of autograph seekers as Bobbyman just pointed out---one kid. Rios is a d-bag and that guy called him on it. Deal with that.

How much would you pay for an Alex Rios autograph anyway. Christ.

The heckler and the kid are both douches.

The kid IS an annoying collector. He's one of the kids who hang out at 119 every pre-game begging for free shit.


I don't mean this in a bad way, of course! Societal concerns aside... I just hope that as memory gets less expensive, the possibility of transferring our brains onto a digital medium becomes a true reality. It's a fantasy that I dream about all the time.