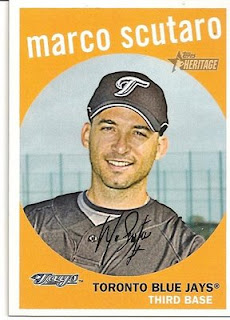 He's a man so bad that former teammate Frank Thomas referred to him as "my ninja". That's right, Michael Dudikoff, he will take you down. American Ninja, my ass.

He'll look unassuming as he steps into the batters box, then terrify you with his icy stare and menacing bat-waggle.

Though he's not a machine like his cyborg teammate, the blood in his veins is said to run four degrees cooler than the average human. And I believe it.

Work him inside, and he'll pull one through the infield. Keep the ball away, and he'll tear your fucking heart out by slashing a double down the right field line.

He'll take two quick strikes, then work an eight pitch walk. If you're lucky, he will only take one base.

Dare to hit a ball between second and third base, and you are out. If Hoss Rolen doesn't get you, he will. O-U-T.

He is Marco Scutaro, and I appreciate him.

Dropping the series opener to the Nats=shitty, but not the end of the world
I'm not stepping out on the ledge over this loss. A letdown was probably to be expected after sweeping the defending champs in their home park, and if the Jays were going to drop a game, it was probably going to be in the opener.
Just do me a favour, will ya fellas? No brooms, please.
I'm not cutting Vernon Wells any slack until he goes yard
I'm not saying it's a rational way to view things, and I know it looks like he's coming around....but I want a tater. Go deep, Vernon. Please. For all of us.
Posted by The Ack at 1:14 AM

Email ThisBlogThis!Share to TwitterShare to FacebookShare to Pinterest
Labels: In Appreciation, Marco Scutaro

Scoots definitely deserves some love - he's given us that solid SS that we all figured we wouldn't have for the foreseeable future.

However, if I see another starting pitcher lifted from the game when he's in the middle of a gem performance and with a good six outs left on the mound, I'm gonna get violent.

Hat tip to the Tao on "Hoss" Rolen. That's his baby.

I'm glad we lost when we did. Because the next pitcher on the mound after Frasor would have been BJ. And that would have been too much. Agree entirely with QJ about Tallet getting pulled. Fuck.

"Hoss Rolen" is fucking brilliant, and we should all make it a point in our day-to-day lives to appreciate Scoots just a little bit more.

I think this link is appropriate here. Scutaro is so awesome this year. I'm a displaced Canuck in Virginia and will certainly pull up as much of the insufferable Nats broadcast I can tolerate so I can see him and the rest of the boys play.

well, hoss rolen can't do it all by himself. maybe russ adams will make this a world series caliber team

Anyone remember vs the White Sox, when Alexei ramirez was on first and he kept trying to steal 2nd, and the hitter kept fouling it off. Scutaro kept putting his hands up to tell him it was foul.

Then when Alexei was running and Scoots saw Bautista was going to catch it, he put his hands up to fool the runner, and then he got doubled at first.

Scutaro is a god.

RE: Vernon ... Ask and thou shalt receive, Ack.