Everybody loves a Tallet Show 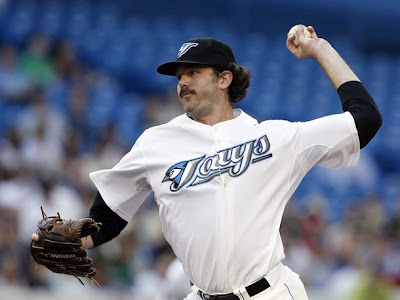 If you're a regular reader around here, you know our love for Brian Tallet knows no bounds.

(Actually, that's not entirely true. There are the bounds dictated by reason, respect and decorum that prevent us from following him home after starts. We prefer to enjoy him from afar. Just sayin'.)

But last night's start took the Summer of Tallet to a whole other level. With the pitching staff in shambles after a week in National League parks, Tallet took to the hill on short rest and delivered an absolute gem over his six innings (no runs, three hits, seven strikouts and one walk).

We didn't realize at the time that Tallet was going on short rest - these are the perils of watching the game with no sound - so we nearly flipped when we saw him take a seat after just 90 pitches, ceding the mound to the absolute shitshow that is Shawn Camp and Jesse Carlson. Wins might be a bit of a meaningless counting stat for pitchers, but we were relieved to see Tallet walk away with a "W" after those mediocre jokers served up batting practice through the seventh.

If the Jays are looking for a promo item for next season, the Brian Tallet bobblehead with interchangeable facial hair would be the best tchotchke ever.

This franchise is not run by the Sisters of the Mercy: We're a little late on catching up with this one, but Mary Ormsby (who we generally enjoy as the voice of reason in her appearances on Prime Time Sports) wrote an absurd article about how the Blue Jays aren't giving away the empty seats in their luxury boxes. In other news, McDonalds won't be giving out stale Big Macs, the twirlers at the Zanzibar won't be offering free lap dances to the downtrodden, and cab drivers without fares won't be giving people free rides to the airport.

Wells' struggles, infinite redux: More recently, ESPN's Jerry Crasnick wrote a very good article on Vernon Wells' prolonged struggles. Those of us on the Jays blogs have probably lost all perspective on Wells and his struggles, so it's nice to read an even-handed account of how poorly Wells is playing and the possible reasons for the slide.

Worth noting: Wells currently has a seven game hitting streak going, including four doubles, a homer (finally!) and four RsBI, posting an .861 OPS over those game. Let's hope this is the man coming around. (And yet, the Hatred Advisory Level has returned to severe. What?)

Summer reading: Just finished reading David Denby's Snark, which is an interesting take on the history and current usage of this often dubious rhetorical device. For those of you who are certain that the world is being led to hell in a handbasket by anonymous bloggers, it's an interesting read. (Then again, if that's your fear, why are you reading this blog?)
Posted by Tao of Stieb at 9:14 AM

Carlson is a total shitshow right now - perfect word. With Camp, at least, I don't expect much more than mop-up duty level performance out of him. It's all about the expectations (there's that word again), I guess.

But if Carlson can't get his, um, shit together soon.....free Fabio Castro?

Not sure if you want to bring up Castro unless he's going to start.

Bullington is doing okay at this point...ERA under 4.00 in the PCL is probably noteworthy.

As for the Hatred Advisory, I actually received Tweets, text messages, and phone calls last night asking if I'd read the Wells article, and saw the quality of guys he was compared to. Wells was called a "joke," "crook," and "payroll sucking bastard," in that order, over the course of a few hours. He's been performing of late, but the hatred remains strong, because of that damn Crasnick.

I'd like to see Bullington get another shot - maybe at the expense of Camp - but with Downs out and only used in the 9th anyway, Tallet in the rotation, and BJ being, well BJ....we need a lefty out there.

I don't mind breaking in Castro out of the pen. Do you really think his long term future is in the roation? Could very well be, but getting his feet wet pitching from the 'pen can't be all bad.

Tao, the Ormsby article was in response to another article by Joe Fiorito where he questioned why the Jays couldn't let disadvantaged kids etc use the private boxes when they weren't being used by the bigwigs.

Always with the disadvantaged kids. Cripes.

Not to be cold and unfeeling, but the idea that the Jays - who are pretty exceptional when it comes to their corporate social responsibility - should just give out handfuls of tickets because the seats aren't filled on any given night is ludicrous.

It would be like going to see Away We Go tonight (and you should, because it is wicked), and having Cineplex Odeon fill up all of the empty seats with every Oliver Twist and Pip and Tiny Tim within a five mile radius.

An empty seat or box does not create a moral imperative for the team to fill it.

are you trying to get shortwaveboy to freak out in defence of the kids?

I'm always glad when I can work in the Dickensian aspect into the comments.

i was under the impression that keith law wrote that book

Bullington wasn't all that bad, I was kind of surprised that he was sent down in the first place. Right now it's a revolving door of relievers, so I'm sure we'll see someone new in the next few weeks or so.

Lost in the discourse of game one seems to be V-dub's steal of third base. But not the steal itself, rather GBOAT rising out of his stance in the batter's box well before the pitcher started his windup because he noticed vernon was halfway to third. I've never seen that before.