Alex Rios is the Windmill 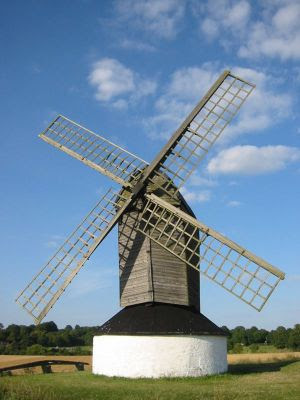 If you could harness the energy of Alex Rios swinging and missing - as he did five times in five at bats in yesterday's 6-5 heartbreaker to the Angelenos - you could power the six blocks surrounding the Dome.

(And somewhere, Alex Gonzalez was rooting for the game to go into extra innings so that someone else could share the dubious honour of having struck out six times in a game. No such luck.)

Let's not be too quick to rip Rios to shreds, though. Over the past couple of weeks, he has likely been the Jays' best offensive player, so he's allowed to have a shittacular bed shitting game here and there.

Your new cleanup hitter (fingers crossed!)
Since Adam Lind went 5-for-5 in his stint as the cleanup hitter yesterday, can we possibly hope against hope that maybe he'll slide into that spot a little more permanently? Does it even matter? Are we just Vernon-hating to fill the void in our life?
Posted by Tao of Stieb at 9:52 AM

The problem with Rios is just that: he has a good week, and then a miserable week. I'd rather have a guy who consistently puts the ball in play (like Lind has been as of late) than someone who is streaky (like Vernon can be).

And on the subject of Vernon: I don't think it's so much hate as frustration that he's not being used properly. As we've discussed, if he were hitting 5 or 6 we'd be talking about him in a different way. They've been trying for years to turn him into something he really isn't.

Near the bottom of my coffee cup it says: "Please be careful: very hot" This should be stiched onto Lind's jersey. 5 for 5 yesterday with 3 doubles. 8 for his last 8 puts him tied with Rance, Tony and Molly for the team record. I'd be so happy if he could bomb the bullpen in his first AB against Greinke to take it away from them.

Rios is going to be a .290 hitter, so there are going to be 0-for games over the run of the season. Yesterday's was pretty spectacular, but that's not a reason to give up on him for a slap hitter.

As for Vernon, he should probably be hitting fifth or sixth, but the question is: Who is really the prototypical clean up hitter on this team? Does it even have one? And does Vernon end up sliding in there by default?

Does it even matter?

Why am I asking so many rhetorical questions?

what if there were no hypothetical situations?

Lind leads the team in slugging, OPS, RsBI, and is second in hits. He's your cleanup hitter. At least he should be.

Anyway, I'm losing focus. If Vernon's back in the cleanup spot tonight, I'm going to be very disappointed. Valentino said it best: we're trying to make him something he's not.

"Let's not be too quick to rip Rios to shreds, though. Over the past couple of weeks, he has likely been the Jays' best offensive player"

With all apologies to Mr. Lind, this isn't saying a whole helluva lot.

Don't forget, Rios struck out twice two nights ago too so that's seven in two games. The Jays' probably would have won last night with just about anyone else hitting in front of Lind. 5-5, no RBI thanks to Rios.

No question Wells should be hitting 5th, 6th or 2nd. Lind should be 4th and Hill probably 3rd or 5th.

Yes, all batters are going to have 0-fer days. And there is also as good a chance that Lind may never touch bat to hide again for the rest of his career, or that Roy comes in and blows his arm out on one pitch. Past results are no indication blah blah blah.

On the other hand, after years of showing promise, Rios has never developed beyond just showing promise, and as such can be as much of a liability as an asset. His brain cramps (like over-running second base recently) have cost the team and killed rallies.

He's a great player, don't get me wrong, but I think we need to divorce ourselves from the idea of him being the future of the team, and if that means that evaluating his value on the trade market, so be it. I'll never be one of the people booing him, pulling a Hinskie, but I'm more inclined to the cold fact that his streaks are due to a fundamental problem in his attitude than to just being green.

As for Lind vs Vernon, I'll bet 10 Green Drazi points that Vernon is clean up because Cito, bless his point little head, tend to manage via the path of least resistance.

And let's not pretend that any of us know Rios, or what his attitude is, or how it is impacting on his game. Was it the fact that Rios was in a good mood and a happy place that he posted a seven game hitting streak from May 24 to June 2, with an OPS over that time of 1.162?

Rios is what he is, but he's not the only ballplayer to have stinker games and braincramps here and there. These things happen.

I think if Rios had flied out five times, he would have had 1-2 RBI sac flies.

I have an idea: teach Usain Bolt to bunt. He would consistently get a bunt single, steal second and third, then you suicide squeeze him home. If he leads off, that's 4-5 runs per game.

That would be maybe the most bizarrely amazing DH to watch ever.

Fairplay, we don't know his mindset, and I don't expect him to be perfect. I'm just saying given what I've seen of his development that if I could get something good for him now I'd be leaning more towards trading him than holding on to him believing he's going to turn it around. Good thing I'm not GM!

Darren:
Wasn't Carl Lewis drafted out of college based on a similar theory, or did I imagine that, or am I confusing my sports?

The problem with trading Rios is that everyone knows how awesome he could be if he liked baseball, but they'll only pay you for what he is.

Wells is the problem right now. Not Rios.

Funny video of Rios being heckled by a man last night at the Jays Care foundation gala.

God, the man looks scrumptious! I want his balls hanging off my chin like a Christmas ornament!

Valentino: I don't remember that, but I know people are always trying to figure out how to use the "fastest man alive" in different sports. I have a vague memory of Canadian sports commentators trying to shoehorn Ben Johnson into football or baseball. Poor ol' Ben could have gone years in the MLB without failing a piss test.

Eyebleaf is correct. What's wrong with poor vernon? This isn't the same guy we saw during the last part of the season last year! It is June now. How late of a start does the old boy need?

Rios is getting pissed !

Wow, that clip is hilarious.

What does Michael Moore have this vendetta against Rios ?

Alex Rios, with a keen sense of irony, says on behalf of the Jays Care Foundation:

"Who gives a fuck"

Oh that footage is prime for the keyboard cat treatment!

I think that experiment ended w/ Renaldo Nehemiah (spelling?) playing wide receiver for the 49ers back in the 80s. Gay Jays Fan step away from the keyboard on the "wide receiver" mention.