Is it too early to fret about Alex Rios? 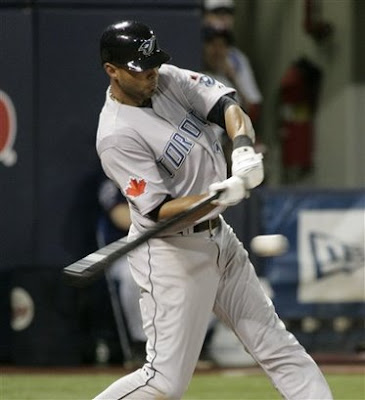 Back in January, we figured that the lynchpin of the Jays offense this year would be a certain corner outfielder who, at one point, was viewed as the future of the franchise. And while we couldn't be happier with the performances of Travis Snider and Adam Lind thus far, we're getting a bit antsy about the at bats of that other corner outfielder.

It's a given that it is way too early to freak out about Alex Rios, especially given that he's still managed to score six times and drive in another six so far. But there's something about the way Rios looks at the plate that has made us sit uncomfortably in the first week or so of the season.

Rios is a lanky and gangly assembly of appendages, and so far this year, it seems like all four of his limbs seem to be operating independently of one another. When compared to the economical swings of the players around him in the lineup (especially Rolen, Hill, Snider and Scutaro), Rios looks like a mess when coming through the hitting zone. His hands go up and down and everywhere, and his balance seems totally off. At times, it looks like he's falling backwards in his swing rather than coming to the ball.

In the field, we've said that Rios can at times look like a blisfully oblivious gazelle. At the plate this season, he looks like a gazelle on ice.

So with the standard caveats (small sample size, it's early, lots of baseball to play), we're hoping that is all stuff that can be worked out. We're certain that the magical mystical troika of hitting sages in the Jays staff are already hard at work showing Rios the way and the light, but it's just a little nerve wracking to see him try to figure things out while hitting in the three-hole.

And we know that Cito would never move him out of his spot in the lineup, because that might hurt his tender feelings.

What's 42 multiplied by inifinity?
We love that MLB celebrates Jackie Robinson Day, and that they go out of their way to single out his contribution to the game. But wasn't it overkill yesterday to see every single uniform festooned with Robinson's now-iconic number 42? We recognize that it might seem like a petty quibble, but in the three games that we watched yesterday, we were totally lost trying to figure out who was who.

We guess that the patchwork of the past few years wasn't exactly working with a few players on every team wearing 42. In addition, there was the uncomfortable issue that the initiative was at times serving to underscore the fact of how few African Americans are actually playing baseball when teams were scraping to find someone to wear the number on that day. On top of that, there's the whole issue of who "deserves" to wear the number, and whether if that runs down racial lines, which is totally counterproductive.

Our suggestion would be that one player on each team get the honour of wearing 42 on that day, and that the honour be bestowed on them by Robinson's family based on some criteria of social responsibility. Wouldn't that make the number special again?
Posted by Tao of Stieb at 9:31 AM

That is exactly what I thought would be a good idea. Plastering the number onto every player sort of takes away from its importance by diluting the occasion. If one player was selected by the Jackie Robinson Foundation or his family it would be very special for that particular player. That player could then be given a little space on MLB.com or even on air to espouse his favourite charity or just express his own personal admiration for Mr. Robinson. This way people would be watching to see number 42. Furthermore, the subtle allegory of one man wearing the number is a nice touch.

Get Selig on the horn.

Tao, now that you mentioned Rios' struggles, he will hit a HR to prove us wrong. That kind of thing always seems to happen when you call a player out.

Rios is (will be) fine. His deficiency so far is when the bases are empty (4 for 21 with 7Ks)which is generally a sign of a mental issue in trying to do too much to get things started (0 for 9 leading off innings).

With runners on thus far he's started well (6 for 14, 6RBI plus 3BB and 1SF). I think his mechanics are just fine, he's just over thinking the former situations .

At least he isn't hitting under the Mendoza line. He just isn't looking as good as we want him to be. Rios has been been a streaky hitter at the best of times as well.

Oh and on the issue with number 42 and the idea about the family/foundation selecting one individual, perfect idea.

While it is obvious this is not where we need him to be and his OBP and Slugging really need to come up (which will happen when and if he hits a few dingers) these aren't horrible numbers top start the year, but when you are comparing them against the rest of the Blue Jays lineup who are hitting like men possessed it makes him look worse then I think he actually is.

Agreed. If Marco Scutaro wasn't getting on base almost 50% of the time (WHAT?!) Rios' struggles wouldn't seem nearly as salient.

Good call on that bases empty stat! If I could pick a time for Rios (or anyone for that metter) to choke it would be with nobody on base. I'm pretty sure we all OD'd on LOB's last season... bunch of SOB's those '08 Jays were.

one of my favourite baseball stories is . . . in 96 i gave my 2 Ottawa Lynx tickets to my dad and he took his then 98 year old friend Jimmy.

In the 7th inning, Dad reports back, Jimmy says, 'this is really nice, I haven't seen a triple A game since '46 when I saw Jackie Robinson play for Montreal'. (and at 48, Jimmy probably thought he was an old guy then!)

I like your idea, but something inside me loves the practice of forcing MLB's closet racists (and there are more than a few) to honour the man.

Tao, on the subject of honouring Jackie Robinson, you are spot on.

Gee, so sorry Tao that you had a hard time recognizing who is who on the field.

I'm sure the death threats, racial taunts, and humilation Jackie received when he began playing pales in comparison to your troubles from one night in MLB viewing.

Ha. I like how you can't discuss whether a certain way of honouring Jackie works without being called insensitive.

Yeah, we know it was totally petty, and admitted as much.

It does strike us that there's another way to honour his legacy, but we shouldn't complain about this. We're sure that if they'd done exactly what we suggested, we'd be a pissant and say that everyone on the field should be wearing 42.

It's our simplistic contrarianism getting the better of us.

I actually kind of liked the fact that everyone was wearing 42. It was a classy move by MLB. For one night, ALL of baseball honoured one single, solitary man. I thought it was a fitting and apt tribute. Nobody else's name and number mattered. Last night it was all about Jackie Robinson, and I enjoyed it.

And Rios will be just fine.

Rios has been terrible against lefties this year, in his 10 ABs, but he was lousy all of last year as well.

He murdered them in 2007 (figuratively; he didn't poison Joe Kennedy or anything) so he's certainly capable of playing better, but it's odd that his splits have developed this way.

A look at some other key players from our division rivals:

I love that MLB the Show 09 commercial with Pedoria shining his MVP award, because he acts just like I would expect him to act. Like a dick. And the commercial is making fun of him for it.

I am not a fan of the number 42. Not a fan of even-numbers in general.

I think the MLB would be better served honoring the players that were unable to break the color barrier.

Like hiring Alex Trebek to host a "name that negro leaguer" version of Jeopardy...

And buy up all the commercial blocks during re-runs of COPS for a week, which'd guarantee reaching their target audience.

Yup, I cast my vote for that scenario.

My thoughts on Rios?

If there is one of 9 guys that's shitting the bed right now, I'm ok with it, seeing as the other 8 are being nails.

He'll come around, most likely when some of the rest slump. Baseballs a long season, as long as we have a few guys hot at a time we can win ball games.

Not like it's mattered thusfar, I suppose him going yard tonight would've only served to make the beating a little worse for the Twins.

What if everyone wore #42 but still had their own name on the back?

@ Eyebleaf - These things are more socially acceptable then what his brother is shining.