The night of broken bats 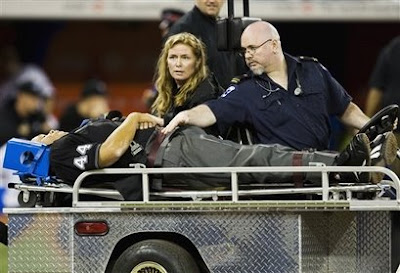 The two incidents that clearly stand out from last night's 5-4 loss to the Rangers are two broken bats. Hank Blalock's broken bat, which felled home plate umpire Kerwin Danley, and the bat that Travis Snider snapped over his knee. The incident with Blalock's bat raises some obvious concerns, given that it is part of a continuing rash of snapped lumber that is becoming an epidemic across baseball.

Broken bats are certainly nothing new in the game. What is disconcerting is the way that players are shaving their bat handles down to nothing while increasing the size of the bat head, resulting in a hitting implement that is too heavily balanced towards one end.

We've wondered aloud in the past whether if MLB shouldn't step in and legislate on the size of bats and the ratio between the size and weight of the handle versus the head, but our assumption is that such a rule would only result in players working harder to skirt the rules in order to gain a competitive advantage. One could imagine that, like hockey players with their sticks, hitters would carry legal bats and illegal bats and swap them in and out of games depending on the situation.

Sadly, we're going to continue to see incidents like last night's until either a star player or a spectator gets seriously injured.

You wouldn't like Travis Snider when he's angry
It's always pretty funny to watch a player lose his shit and snap a bat over his knee, but we're a little concerned over The Pasty White Hope's reactions to a couple of at bats last night.

Snider followed up breaking his bat after a strikeout with a total freakout after popping up with the bases loaded in the eighth. And while it's great to know that Snider is passionate about the game and never wants to give an inch, we worry that his ostentatious outward anger is a sign of some inward frustration that could affect his game. Baseball is a game of failure, and we hope that Snider is able to handle the bad at bats as well as the good.

Another thought on Snider
Sniderman's been getting under a lot of balls in the past few games and popping them up. We're not sure if this is a sign that the swing is a little off or that pitchers are keeping things down a little better against him, but here's hoping that he makes the adjustment.
Posted by Tao of Stieb at 9:58 AM

Lunch Box has got to take a few more pitches. He seems a tad too overzealous at the plate right now. But it was slightly enjoyable to see him break that bat over his knee. Love the passion. Perhaps next time he can just break Rios in half after he lazily grounds to short and doesn't bother to run it out.

You fuck off! Fucking fuck!

Snider losing his shit isn't a surprise. Apparently he has a history of it.

Guess the anger mngt therapy wasn't too effective. Gotta feel for the guy though.

Yeah, it seems like those are two different things, though.

It just seems like Snider is putting a lot of pressure on himself. It's understandable, because he's always been the best player on his team, and the best bat in the lineup. Now he's facing challenges that to which he is not accustomed or prepared for, and we just hope that he cools it rather than losing his shit.

Four our sanity if not for his.

That's what we get for trying not to end a sentence with a preposition.

There was a lot of anger in last night's game; from Doc's taking the lord's name in vein, to Snider snapping his toothpick. And they couldn't even numb the pain with a tall, cold brewsky after the game at the RC. For shame!

@Tao: If we're being serious, ITA. They've figured out a way to pitch to him and he's frustrated.

Snider can snap as many bats as he likes in my opinion, and same goes for Halladay, just so long as it means they give a flying fuck who wins the game.

I think I heard Snider yell "FUCK!" when he grounded out. Or maybe that was me.

The kid has gone through some seriously effed-up shit in his life and lived through, so I'm pretty sure he can handle the ups and downs of baseball.

And Doc is always pissed out of his mind when he pitches.

For the greater good, and Snider's mental health, hopefully he went home and used the broken bat to beat said strippers like a pinatas.

All this talk of Rios and Wells being lazy and questioning their work ethic (last night on Wilner) strikes me as a bit racist. If it was Hill and Lind in the same position I doubt we would have all this "lazy" talk.

Hill and Lind aren't in the same position.

I didn't mean literally playing in the same position.

fwiw, Wells yells fuck almost every time he gets out, you can frequently hear it clearly on TV.

Hill and Lind aren't in the same position.That's why he said 'IF' you moron.

Tao, when are you going to post another inane video?

Dunno. Nothing stupid enough has come my way in the past 24 hours.

You could post the inane video of the song you reference in the title. I almost like Jay Reatard in spite of myself.

Actually, that's an inadvertent cultural reference. We were thinking more along the lines of "the night of long knives"...

But we'd concur on Jay Reatard...I want to hate him, but I kinda like what I've heard. Probably from hearing it over and over on MLB 2K8.

A streaming MP3. The song is as maddening as David Purcey himself.

Snider used to have anger issues throughout his life espcially during his high school days.

After his mother passed away when he was in the minors he supposedly learnt what to really get angry at, but he still has suppressed rage every now and then that he lets out.