The K has lost that special feeling 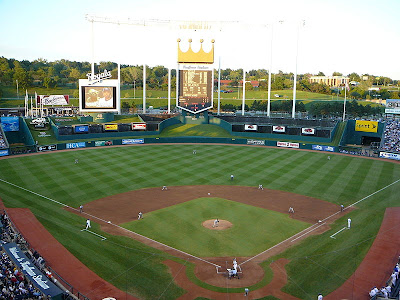 Kansas City's Kauffman Stadium has always been one of our favorite big league ballparks.

With its majestic fountains and the lawn beyond the outfield fence, "The K" always seemed like a great traditional park without the faux-retro veneer that many of the newer stadia attempt to use to sell a nostalgia for a time that never was. So we were a little surprised and sad earlier in the season when we saw a Yankees-Royals game in the "New" Kauffman Stadium.

After getting a better look at it in last night's Jays-Royals game, we reluctantly understood what the team was going for and why they made the adjustments they did. There seems to be more of a party atmosphere beyond the outfield walls, and for a team that draws as poorly as the Royals have in recent years, causing some sort of commotion can't hurt.

(In fact, seeing the "Party Porch" beyond the outfield wall made us wonder for a second whether if this sort of thing would work at the Rogers SkyDome. And then we thought of all of the shenanigans that a bunch of lightweight douchebag frat boys could get into in such a venue, and perished the thought.)

Obviously, a team has got to maximize their income in those 81 home dates every year, and we don't begrudge the Royals for attempting to create a new atmosphere, replete with food and beverage and other revenue opportunities. (And from the sounds of things, the fans like it.)

We're sure that we'll come around and acclimate eventually to the new set up, and we admit that we are probably just being an old fogey. Still, we're going to miss the old K.
Posted by Tao of Stieb at 9:09 AM

Email ThisBlogThis!Share to TwitterShare to FacebookShare to Pinterest
Labels: stadia

On the negative side; I have a sneaky suspicion that this series is where our starting pitching is exposed. Kansas City's pitching is awesome and our 2-4 is arguably one of the worst in the majors. Purcey, Richmond, Tallet and Burres is UGLY. I think we'll be lucky to take 1 out of 4.

Richmond and Tallet have pitched well in their past couple of starts.

Never been, but I've heard from some road-trippin' buddies that the Kauf is a great place to watch a game, not sure how/if the changes would affect that opinion.

Yeah, this series gave me bad vibes going in. Fucking Bannister was sure painting the corners last night though. Purcey, not so much.

On a brighter note, Janssen apparently looked good in his first rehab start last night...wonder when he could emerge?

Tallet and Richmond have pitched well for sure but I just don't see them doing it for any length of time.

It would be great to have Janssen back but people seem to forget he projects to be a 4th starter type. I don't think we should expect him to come riding in on a white horse or anything.

A funny thing that no one mentions is that upper management e.g Beeston completely missed the boat on this team. They told the fans they were not spending money as it was a year for all the young guys to get experience, etc and that 2010 was our year.

Granted it is early but it does look like we can compete and imagine if they had coughed up the dough for Derek Lowe or AJ or somebody. With Doc and a solid experienced #2 in rotation I would think we would have had a legitimate shot at a playoff spot.

No, I agree completely on Janssen being a #4 - in fact, I think I like him better out of the pen, to be honest - but with the state of the rotation, a guy who can be a #4 is probably an upgrade at this point....especially if Purcey can't get back on track.

Purcey has been nothing but a disappointment so far.

We just have to tread water until some arms are back. Fuck ...

Must. Maintain. Even. Keel.

It really is fucking SICK when you think of what this team could be with the offense raking like it is, and with a healthy rotation of Doc/Marcum/McG/Litsch/Romero/Richmond/Purcey/Mills/Cecil/??..

Obviously, at 14-7, definitely not complaining and thankful for the hot start.....but I'm sure we'd all feel better about the sustainability if the rotation was fully loaded.

I was wondering if they took out the waterfalls. Damn...seems like a mistake to me. The waterfalls were awesome.

^^ Speaking of which, how awesome was it to see Marcum in the dugout last night?

Sometimes, late at night, I can still see Marcum choking up when talking about being away from the guys for the year after his TJ surgery.

Wasn't Marcum going to throw a bullpen session this week? Did I miss that?

Scott at earliest he will come back in August BUT seriously, he needs time to more recuperate from this thing. The Waterfalls seem to still there Chris. They should start Miller or one of the AA kids instead, they are making a mistake putting out that crap called Burres. It's an automatic loss quite frankly. The bats have cooled down and KC has some good pitching so bollocks to Burres.Purcey should be in AAA, because he is too inconstitent.


@Ack, the Top Three of Doc/Tallet/Richmond is not bad BUT where JP made a mistake is bringing in Burres. He should have brought Parrish back. anyway, Miller and the kids should be brought up before Romero and Janssen are ready. Jesse should be a sixth starter of some sort because quite frankly he's a good 4 or 5 if anything.

Looks like Greinke is going to be on the cover of SI this week:

Pretty embarassing as it will coincide with him getting smoked by the Jays' bats.

I'm willing to let him make a few starts to see if he can be seviceable for the team, but the problem I have with Burres is that it's just such a blatantly obvious "placeholder" move.

Now, I don't think the kids (Cecil, Mills) are ready - why promote them when they're getting knocked around in AAA (though Mills has looked better lately)....but there's no other options?

I bet Matty Clement wishes that he hadn't bailed on the AAA assignment and took an early retirement....

I would like to see Bullington stretched out...way more of an upside then Burres.

J.P. has a boner for former Pirates.

Been to all the current parks, and 40 MLB parks total (missing the 2 New Yorks and the Nationals new park, getting those in July,) and Kauffman ranked #3 to me.

I don't think the new additions take away anything from the charm of the old setup. I'm going to go check it out to be sure, but I didn't see anything egregious about the renovations.

The waterfalls are still there, and they even added new waterfalls into the renovations. You can still see I-70 in the background, so I'm sure it will still have the open feel to it. I think they did a commendable job.

When I was a kid, I used to make Lego remakes of different ballparks. Skydome was my favorite of course, but Kauffman Stadium was my 2nd favorite.

I live near Kansas City, and I like the renovations, Tao.

Yes, but you are also a Brad Fullmer fan so your taste is open to questioning. ;)

A touche' to end the ages with!

what happened to Parrish?

I hope they don't push janssen back too early, he was cool enough to give my little brother a signature before a game a couple of years ago.

I was there Saturday -- even caught a foul ball -- and I have to say the park is really beautiful. Don't fear new because it's not old. I'm as much a hardcore traditionalist as the next baseball fan, but I really like the new K.

They should get Parrish.He was fine with the Jays last year. The Os signed Parrish THEN released him. He's out there and the Jays GM should pick him up. Either that or bring up Miller or one of the flamethrowers @ AAA.

Yeah, they still have the fountains, ALL of them. Now you can stand behind them or sit among them. You can watch from the full 360 degrees of the stadium and I think there are some great views we've never seen before.

I grew up with the "Old" Kauffman - "Royals Stadium" actually. The renovations make great atmosphere in the outfield, fans, crowd noise...baseball things. The improvements are incredible.

Behold! Behind the fountains