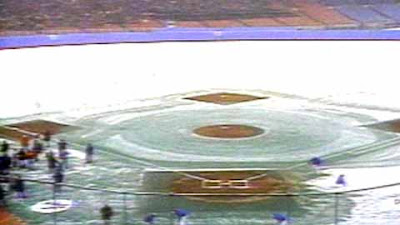 Even the cold, damp temperatures and snowflakes the size of big fluffy white kitties won't dampen our enthusiasm for Opening Day in the 2009 Blue Jays season.

Nor will the inundation of naysayers who are lining up to talk in funereal tones about the state of baseball in Toronto now that the team seems - to them, at least - somehow down and out before the opening bell has rung. While some writers, like the Globe's Stephen Brunt, wonder what Jays fans have to root for this year given the strength of the Red Sox, Yankees and Rays in the powerful AL East, we think this is one of the most exciting years in recent memory.

This is a transformative year for the franchise, where many of the faces that will make up the next wave of the team's successes will begin to appear on the scene. This is the year where some of drafting decisions of J.P. Ricciardi and his staff will begin to bear fruit. At the outset, we will see Travis Snider and Adam Lind installed as regulars in the lineup and Ricky Romero in the rotation. By year's end, we will see Brad Mills and Brett Cecil take their turns in the rotation, and J.P. Arencibia should get at bats in the late summer. We may also see Robert Ray, who we still have pegged as the surprise arm who will emerge this year.

Catcher Brian Jeroloman and pitcher Zach Dials will also be worth tracking throughout this season, as will be first baseman David Cooper, making the quick jump to Double-A after being drafted last year. Brad Emaus - who was essentially an anonymous low-level prospect a year ago - is a year or two away, but offers extraordinary promise for the future.

In a way, this year's team reminds us of the 1984 team, where a group of players under the age of 25 began to emerge as the team's core for the better part of the next decade: Barfield, Bell, Moseby, Fernandez, Key, Gruber. The Jays were still Canada's second best team at that point, but the blueprint for the teams that would win pennants and compete every year for the next decade was set that year.

Certainly, if you are focussed on the the short term, and the wins and losses in the next six weeks or six months, you may be disappointed by the latest incarnation of the Blue Jays. But for those of us who have been following this narrative word for word, line by line and chapter after chapter, this is an incredibly exciting time.

Now, we watch the next heroes step out of the shadows and into the limelight. And if that is not the fodder for the fondest of dreams, than what is?
Posted by Tao of Stieb at 9:47 AM

Baseball is a game of inches and it is all new today. Go Jays!

Thanks Ack, and thanks for the awesome posts over the weekend.

After a long cold winter of posting about speculation and off field tomfoolery, it's going to be great to talk about the games again.

It's baseball time again! Get some!

Can't wait for the first pitch to be thrown tonight.

Great post! Thanks for all the work over the off-season, guys!

Game on. It's gonna be a glorious year.

This is what I try to tell the people who say they're not gonna watch this year cause the Jays will suck. You're missing the fucking point!!

This day is going way too slow, especially with a few of the early games canceled.

For those attending tonight's home opener, which of the following highlights from last year's opener will we see?

I meant to include this in my "top 10", but got mired in the depths of my own bullshit - before your post reminded me.

Somewhere, there's a quote from Beeston about how this is a "reload" year before next year starts another 10 year run. That comment is pure fucking Viagra.

Man, to hell with Beeston. Keep Doc in the fold and be a contender for the next 6 years. Give him 23 mill a year and make Wells stretch out his contract ,like what JOnes did with the LAD.

A brilliant post reminding everyone what is really the point this year. I still maintain that this team can win as many games as last year.