That's what Travis Snider thinks of your small ball 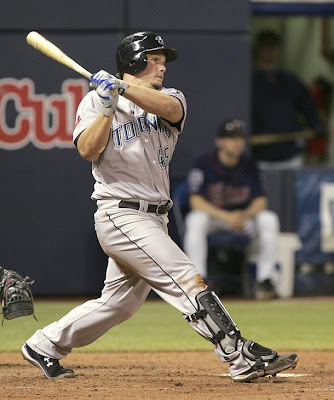 When it comes time to actually take the wrecking ball to the Hubert H. Humphrey Metrodome in Minneapolis, someone might consider giving Travis Snider a call.

Snider, who a day earlier was asked to square around and bunt over runners in an 8-4 loss to the Clevelanders, crushed two mammoth blasts into the far reaches of the aging stadium, leading the Jays to an 8-6 victory over the Twins. So the moral of the story, once again, is that small ball sucks.

When Snider was asked to give himself up to help move Rod Barajas' big slow butt up 90 feet, we turned to the father-in-law and said that we hoped that this is the last time we had to see nonsense like that. And while we mind don't that Magical Baseball Sage Cito Gaston has decided to take a slow route with Snider and make him earn his Major League bona fides, we're pleased as punch that The Great Big Giant Pasty White HopeTM has already begun to make the case for a spot further up the lineup and a green light at the plate.

Where's Tomo Ohka these days?
As if the Jays didn't have enough worry over the state of their rotation, Jesse Litsch walked off the mound with "tightness" in his elbow. Given what happened with Shaun Marcum after his bout with elbow tightness last year, we're more than a little worried about what the Jays will have to do if Litsch is going to miss significant time.

It begs the question: Is there anything left out there on the scrap heap of starting pitchers? Because off the top of our head, we can't think of anyone who would do much better than just setting up a tee at home plate.

Also, doesn't this lend a bit of credence to Keith Law's notion that Brad Arnsberg, while being a wizard of a pitching coach, is also murder on young arms?

Around the Minors
The Las Vegas 51s' affiliation with the Blue Jays is off to an inauspicious start, with the Triple-A club going 0-4 out of the gate. If you've got trouble with your blood pressure, we don't suggest looking at the team's pitching stats to start the season, because there are some gaudy ERAs after the first series in the thin air of Colorado Springs. For the first time in Tao of Stieb history, allow us to use the following caveat: "The PCL is a hitters league."

In New Hampshire, the Fisher Cats are off to a 3-2 start, with Springtime hero Brad Emaus driving in eight to start the season.

In Dunedin, the Advanced-A Jays are 1-3 to start. Diminutive reliever Tim Collins - a prospect discovered by J.P. Ricciardi's dad on the fields of Worcester, Mass., has stood out so far, striking out seven batters in four and a third innings while walking none and giving up a single hit.

Thanks to the Ack
While some in the comments figured that the Ack spent too much time in the comments of the Drunk Jays Fans, we tip our cap to our colleague for coming in and holding the fort in an extra long relief outing over the holidays. Great job Ack...now go and put some ice on those blogging fingers, because we'll need you back soon.
Posted by Tao of Stieb at 9:35 AM

I don't put any credence into the fact that Arnsberg is a "young arm killer." None. Arms break down all over the big leagues a lot more than they used to. It ain't just us. McGowan had TJ as a youngster. BJ was TJ waiting to happen. As for Janssen, Marcum, and McGowan again, it's all happening at the same time, so I'm going to go with it being one rather large coincidence. In Arnsberg I trust.

But there's also a history of arm troubles with the pitchers who came up through the Marlins system, including A.J. and Beckett.

The other side, we suppose, is that basically 50% of pitchers now are either coming off of TJ surgery or on their way to it. So Arnsberg might not be any worse than any other coach.

AND YOU SHALL KNOW HIM BY THE TRAIL OF DEAD!!!

Best line ever, however accurate it may be. Is anybody out there actually tracking the numbers by team or pitching coach or whatever of pitchers whose arms get hurt? Citing anecdotal evidence and Law worshipness, it does seem like a lot of Blue Jays have sore arms.

It's getting to the point where if you haven't had TJ by the time your career is done, you're one of the more fortunate ones.

And Keith Law clearly hates J.P. and the Jays. It should come as no surprise that he's saying stuff like "And you shall know him by the trail of dead." Great line, yes, and he was great on the Drunks' podcast, but, well, there's a reason why he's saying that stuff.

I don't know what Rick Anderson said to Luis Ayala last night after ball two, but I think it was a curse. Or perhaps a (wait for it...) VOODOO WHAMMY!

I looked up. I don't know why, but I did. Maybe it's that I really wouldn't be surprised if that moon shot was still flying.

Wasn't Beckett more of a boo-boo blister guy? Perhaps Arnie should bone up on his advice for skin care products.

But yeah, some hard and fast evidence would be interesting to see, as opposed to relying on what others think of his "reputation"....arm problems seem to be the norm across baseball with many big-name young guns....Hamels, Hughes, Kazmir, Bedard, Wood, Prior, Sheets.....we could go on all day.

IF one compares the Jays to other clubs in the AL East, who has injuries like Toronto's ? No one, not even close. Law seems to be right, otherwise how the hell do all these pitchers go down like this? Also what other club has had injurie slike this in the last three years(and especially the last year)? NO one, blame Arnsberg.

While nobody on the Jays (save Halladay) works an excessive amount, perhaps the injuries have to do with the fact that a lot of Jays pitchers throw offspeed and breaking pitches more than half the time. I don't know if it's harder on an arm than fastballs, I just think it could be a possibility.

You wrote 'Sinider' - I like it, a combination of 'sinister' and 'Snider.'

What's it's absurdly wishful thinking, what about Pedro?

Pedro...hmmm. Let's wait until we hear the results of the MRI before we go too far down that road.

Why hasn't Roy's arm fallen off?

Burnett threw the most innings in his life last season. Why's his arm still hanging on?

Ridiculous to blame Arnsberg, we should all hope he doesn't fancy a manager gig or somewhere warm to work in april.

Assuming that next year the rotation is Halladay, Marcum, McGowan and Cecil I see Litsch as the long shot between him Romero and Purcey.

Lind's defense is like Manny's but with less range and a worse arm.

Because batting average is a dumb stat. That's why.

The toneless nature of the internet strikes again. I can't tell if you're being sarcastic and amusingly ironic, or serious and unwittingly obtuse.

More than anything, we were probably just distracted.

But ultimately, the answer to your question is probably something like "Because I said so" or "Life's not fair".

Not many organizations have kids in 4/5 rotation spots. We just have really good young pitchers.

I think it definitely makes you wonder...