The Summer of Tallet rolls on 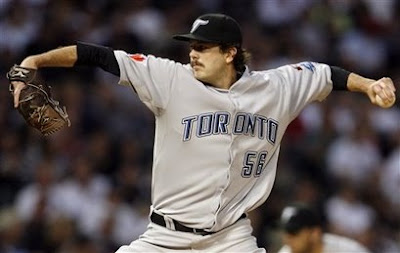 It's easy to get distracted by 21 hits and 14 runs, but the story of last night's 14-0 win over the Chicago White Sox may well have been the impressive outing by makeshift starter Brian Tallet.

(And even if that isn't the story, that's the angle that we're going with. Because we want to keep fueling this Summer of Tallet meme.)

Tallet's 5 2/3 innings of scoreless are impressive and most appreciated given the depleted state of the staff. And while the final score makes the game look like a laugher, Tallet did yeoman's work keeping the Pale Hose off the scoreboard early when the game was still close in the first four innings. The only blip in his performance may have been the three walks he issued, but we'll cut him a little slack on his location given the crazy swirling winds last night.

Our favorite play of the night was Tallet's perfectly executed covering of first base on a hot shot to Overbay, after which the long, lean, loping lefty continued sprinting halfway down the right field line. (You just can't stop a beast like Tallet in mid-gallop.)

And as for the offense?
If the ruling philosophy is "Get A Pitch To Drive and Hit It", then the Jays adhered to it admirably last night. It's amazing to think that they were able to score the first 13 runs without a single long ball.

Alexei Ramirez certainly helped the Jays' offense along at several crucial points last night, but maybe the lesson out of that is that a hard hit ball will always have a chance to make things happen.

(Or something like. We're pretty much making this up as we go along. When's the Ack back again?)
Posted by Tao of Stieb at 12:57 PM

What a romp, I touched on the wind and the mighty Tallet as well... I think we get our pictures from the same place!

I wanted to watch Alexei Ramirez's ridiculous lack of plate discipline, but ended up watching the car crash that was his defensive effort.

Tallet, Doc and Romero are all going to, clearly, split the Cy Young.

Watching Burres last night made me appreciate Tallet that much more.

The Ack is back next weekend Tao.

Hrm.. So Tallet has, always has had, still does have more stuff than Litsch.

Really, if you had to pick, who would you start?

Ya ya, loosing a situational lefty in the pen. Those guys are dime a dozen if you just need a guy to get ortiz to hit in to the shift.

Go Tallet. Litsch, well, the dome is only a bus ride away, so its not that bad...

seriously though, my addiction to the team had me trawling for a sports page every morning, and thank holy fuck for Baseball Tonight (bliss).

sorry for the blogcation, but I booked our flights back in February.....I figured the Jays would only be about 12-8 by now, not 14 and fucking 6. besides, the Tao's content embarrasses my bullshit contributions, so be thankful. my only job here is to keep his rap fresh and ready for consumption.

This cannot truly work, I believe so.