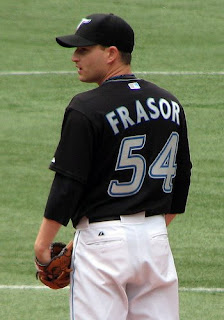 Jason Frasor has always seemed like a lonely guy. Summoned from the 'pen, he's only ever really had two friends he could count on. His best friend, the fastball, is a loyal fella, but a little too straight and predictable. Then you have his buddy the breaking ball, who's just a little too inconsistent to count on. This offseason, Frasor decided to add to his circle of friends, and today was the official unveiling.

Aaaaaand end hyperbole. Ok, so I'm overstating (but that's what I do), and it's not like this pitch is going to turn Frasor into the second coming of Trevor Hoffman. But did you see how convincingly Frasor told the Cleveland Indians comeback to go fuck itself this afternoon? If nothing else, this outing has probably gained Frasor a more prominent role in The Cito's bullpen - but then again, there was nowhere to go but up for our guy Frasor. He only made the team because Jeremy Accardo had options remaining, and before today, Frasor's job was to push the mop in 5+ run games. More troubling for Blue Jay fans is the scenario that unfolded leading up to Frasor's big spot.....

What to do with BJ Ryan? Interesting discussions in the (wildly popular) game thread over at DJF. Several commenters, perhaps rightly so, are calling for an end to BJ's reign of terror as the Jays' closer. I tend to agree with resident drunk Stoeten and think you still hand the ball to Ryan when the next save opportunity arises. I'm not going to lie to you, I hope that save situation is of the 3-run lead variety as opposed to a one run nailbiter, but I think he's still the closer....for now.

His velocity is largely there (87-89 today), but the slider and location don't appear to be. Flawed logic alert - but where else are you going to pitch him? Middle relief? Mop up duty? Do you think BJ has the makeup to excel in those situations? I think you send him back out with the lead in the ninth, and let him pitch his way out of the role.

That may very well happen, but for now, I agree with The Cito's take:

Ahh, The Gastonian era. Anyone else enjoying this?
Posted by The Ack at 5:57 PM

yes, yes I am enjoying this very much. thanks for asking.

define "starts to hurt the team"

when he loses some games for them - i like that approach by Cito - I think that BJ will Come around - His first outing he looked really good and only had one bad pitch - Lets be honest he pitched a lot worse in some games that he got the save. And as far as today well that shit happens - To be honest i was just happy that his velocity seems to be back not pre tommy john velocity but its high 80's. Happy with overall play..
Pennant.

Anyone notice if Beej threw anything besides his staight fastball tonight? Maybe the problem isn't the velocity or command, it's just that everyone is sitting fastball. He needs to drop in some vintage sliders or something.

I hope Jason Frasor comes around...It seems like everyone forgets how VALUABLE he was when he first came up in 2004! He gave up only 2 ER in his first 22 appearances, and his ERA went as low as 0.68 through JUNE! It was that goofball Gibbons that left him hanging out to dry in a few spots later in they year that caused his stats to APPEAR less than extravagant! And he's been the bullpen BITCH ever since that!

If nothing comes out of the Jays this year, I hope he has a great season, and gets rewarded with the big paycheck he has deserved for so long !!

B.J. was throwing sliders too, they just all seemed to go for balls.

I too am enjoying this. Rather profusely, actually, thanks.

So am I. Until he had Snider bunting.

BJ threw 9 sliders out of 31 pitches but didn't actually thrown one until his 14th pitch. It was a single to Francisco. Then he started throwing slider after slider and they all seemed to fall in the dirt for Barajas to scoop. Just an awful, awful outing for BJ. He's still the closer because, like Ack said, where the hell else are you gonna put him? Until he starts to consistently cost us wins, he's the closer.

Agreed. If BJ can't find his slider & throw it for strikes, he's in trouble. Big time.

PROGRAMMING NOTE
....the Tao should be back in action tomorrow sometime. I had hoped to post something today, but alas, life got in the way. So you can blame the lack of an Easter Monday update on me....

Now, off to bed. So sleepy.

Fuck you Christopher! I bounced around the blogosphere for about 15 minutes today.....got home from the office just in time for the game. YES.