And the hits just keep on coming 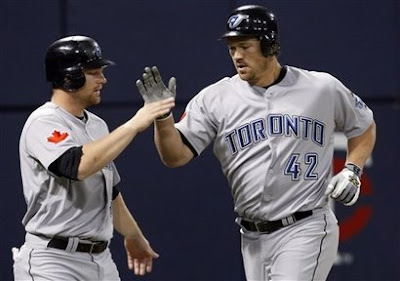 So here's the question of the evening (before we retire in a 'Tussin fueled haze of bliss): At what point do we turn the page on the conventional wisdom that the Jays would have a lousy offense this season?

That question occurred to us as we were watching homer after homer leave the yard in yet another ring-a-ding-dinger fest. We get that these are still early days, and that there's another 25 weeks left in the season. But with the Jays pounding out four homers and twelve runs in a 12-2 rout of the Twins, we're wondering if anyone other than us is noticing.

Because, really, any man, woman or child that fails to recognize the awesome power of this immaculately managed offensive juggernaut runs the risk of running themselves into a big-time Voodoo Whammy(!) that is sure to leave a mark.

Tomorrow morning on the blog
Hopefully we'll be a little less shakey, feverish and medicated (damned Venezuelan Mamba Flu!). Also, a thought on Jackie Robinson Day, and irrational early concerns over a certain offensive linchpin.
Posted by Tao of Stieb at 11:49 PM

Would the irrational concerns be Rios or Wells?

If it's Rios I think the answer is time, time for Cito and Gene to figure it out and beat it into Alex.

That's failing to mention the +20 run differential already! We just have to hope that another starter doesn't drop before we get one back healthy.
-brent in Korea

That was a thing of beauty. I want to believe, but it's way too soon. Best to just enjoy and not think about it too much. Kind of like dating a tranny.

But can we talk about who might be available if we are loading up at some point?

The offense is certainly good this year. There are some concerns about it though:
1. Snider - Are the pitchers going to find a weakness in him? I was concerned for a bit about the high and tight fastball today. It doesn't look like a real problem, but might be something to keep an eye on.
2. Lind - He's still young and will fall off this pace, but how much?
3. Rolen - Can he keep this up? Did they really teach an old dog new tricks? Will he be healthy?
4. Hill - Where did this power come from?

If these four guys stay close to what they've done so far, the offense will be just fine.