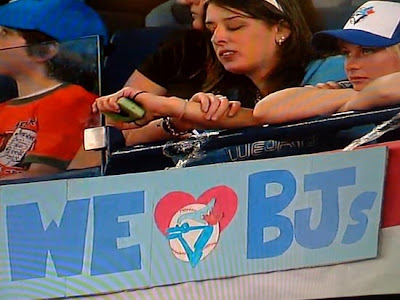 Caught this on last night's highlights, and we're happy to see that it has been captured for posterity. (h/t to Best Week Ever)

Other quick and dirty stuff
-Apparently, Pete Gammons went off on Jays fans on ESPN. Anyone know what he said?

-Is this guy going to be the next President of the Blue Jays? The NatPost's Jeremy Sandler says the Jays are looking at the Suns' Rick Welts for the post. A very impressive resumé, but really? Another Phoenix guy in Toronto?

-At least the Tigers fan who commented here has a bit of a sense of humour about last night's tomfoolery: "Who ever the heck it was throwing those baseballs at Anderson out in left, the Tigers need to sign him quick!"

-Geddy Lee. At the Jays opener. In a Strong Bad hat. Awesome.

-Finally, this awesome video which confirms two things: Chris Berman is just awful, and George Bell had some wicked quick hands. Skip ahead to 0:48 to see the Jays highlights. (A Big League fist bump to Big League Stew for finding this, because we fondly remember that game like it was...well, something less than 21 years ago.)

I think her teeth would leave a mark.

Did anyone else see those guys at the game in the camo shirts that said "We Love BJ'S"?

Geedy Lee looks like a kid from 1982 with that getup! Where's his Jay's pride?

I'm with Ian. Those signs are not just happy accidents. They might as well attach "Pun intended" on a separate piece of poster board,