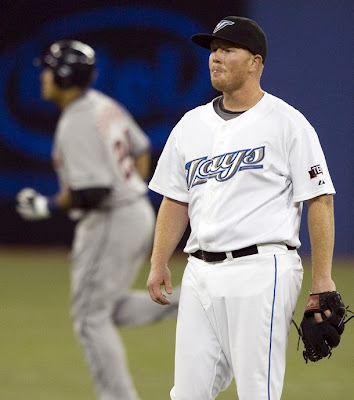 Maybe people should have pulled back on all the talk about the Jays' record for wins to start the season until, you know, maybe at least three? Because when you start to go down that road too far, talking about the 1992 team's six win streak to start the year, you're really setting yourself up for a Voodoo Whammy(!) in the form of Miguel Cabrera's bat.

We could pick apart last night's performance in the 5-1 loss to the Tigers by both the offense and the pink-round-efficient pitching, but frankly, it's a little too early to start taking the micro and blowing it up into the macro. There were a few bad pitches and a few bad at bats, but we're not going to lose our shit about them until they become an actual trend.

Give it at least until the end of the weekend.

Let's hear it for the bullpen boys!
We've kicked Jason Frasor around a bit over the past few years, but he looked pretty great last night. In fact - and we hope we're not getting way too far ahead of ourselves - it crossed our mind that Frasor and his newfound circle-change might actually be a candidate for the closer job if someone else in the bullpen isn't able to fulfill those duties.

Brian Tallet -who has a mustache that would look right at home in the 1984 Blue Jays team picture -looked really good last night in his inning. We know that people keep talking about him as a surplus lefty arm and perfect trade bait, but we're inclined to think that this is The Year of The TalletTM. You don't want to mess with that sort of good ju-ju.

Apologies and Kudos to the Mainstream Media
After excoriating the hockey-centric sports media in Canada yesterday, just watch us now as we backpeddle. Or at least tip our cap to Sportsnet, who appear to be committed to a half-hour JaysConnected pre-game show this season. We're not exactly Brad Fay fans (that guy's like a can of mousse reading the autocue), but Barry Davis and Sam Consentino come off as actual baseball fans with a sincere interest in the game.

We'd suggest putting Davis and Consentino together before the game to have them chat it up amongst themselves on the state of the Blue Jays and what's happening around baseball. For away games, we'd see putting Davis in the studio (give him a phone book to sit on), then do a two-ender with Consentino on site. We'd also suggest forgoing the interviews with the players, because that sort of thing is as dull as shit now that they are media-trained within an inch of their sanity.

We'll still go to bed dreaming of the MLB Network, but this is progress. And as Lloyd the Barber quite rightly pointed out yesterday in response to our temper tantrum, we'll likely watch more games on TV and see more baseball content this year than our parents would have seen in a decade.

Cripes, we flipped back and forth last night between three games AFTER the Jays game was done, so we probably shouldn't put on the poormouth as much as we do.

This afternoon's affair
The getaway day matchup between Ricky Romero and Rick Porcello at 12:35 this afternoon should be interesting. As has been noted, it is the first time in history that two first round picks make their MLB debut against one another.

Also, we should expect to see a few new faces in the lineup, as Mike Barrett and Kevin Millar should be in the lineup.
Posted by Tao of Stieb at 9:28 AM

The Year of The Tallet.

And we're officially going to COWBOY UP this afternoon. I'm looking forward to it.

Gah. Consentino is the worst thing to happen to baseball media in the last decade.

Seriously? Consentino is fine. He's a baseball nerd like the rest of us, and we respect him for it.

It could be a lot worse. Does anyone remember Ashley Herrod, the inaugural host of JayZone?

I'm glad you stepped up there, Tao, because I don't mind Sammy the bull Cosentino.

And how about some TV facetime for Wilner on a pre or post-game show? Is that even a viable option with his radio commitments?

It would be a total riot to see the look on Wilner's face when he is doing the JaysTalk.

BTW, did everybody hear that there won't be a Wednesdays With J.P. this year? Sad, but inevitable.

Tallet is badass, and so is that moustache.

I read on Wilner's Blog about no more "Wednesday's with J.P.". I guess it was only a matter of time before that train came to a halt.

So far so good this afternoon.

No Wednesdays with JP??? Shit

/desperately searches around for new shtick

Will the next post be entitled, "There go our nightmares of 2-160"?

Ho 'about that Ricky Riccardo?

well we always have the leafs...err...raptors...err...next season?