Is Cito getting a free pass? 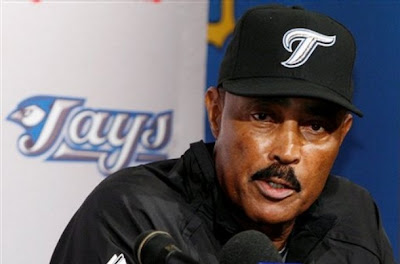 There's an interesting line of discussion going on in the comments over at the Drunk Jays Fans over the relatively light hand that has been used with Cito Gaston this spring. The Drunks' Dustin Parkes raised the notion that some of the statements that Cito has made publicly through the Spring - and all the way back to the Winter Meetings, if you recall - are a bit goofy (and that's being generous). But for some reason, no one seems to be nearly as quick to call him on it as they were with his predecessor.

The question was raised as to whether or not if Gaston somehow has earned some extra rope based on his winning history, and whether or not if we should consider those past accomplishments when we're about to unload on the saintly Cito.

As we said in the comments on the Drunks' site:

People used to lose their shit talking about how John Gibbons sat in the dugout, or for any number of other minute, insignificant bullshit reasons.

Every word that came out of his mouth was interpreted to be the hopeless prayer of an idiot.

And if Gibby had ever made any of the weird speculatory statements that Cito has in this offseason, he would have been excoriated for them.

If people want to give Cito a free pass for life, maybe he should be the mascot and not the manager.

We have two basic thoughts about this whole Cito thing.

The first is that when we look at past performance as a reason for giving grace to the Jays' manager, it is at least worth noting that John Gibbons' performance - never fewer than 80 wins - was not as bad as people thought, and that moreover, Cito's later performance as skipper from 1995 to 1997 was far more dreadful than people remember. So it should probably be a wash.

The second thought that we have, though, is that we're probably as guilty as anyone in giving Cito a free ride over the past few months. There have been a number of times that we've read a quote from Gaston and thought immediately that he was talking out of his ass, but rather than scampering over to Blogger to mercilessly take him down a peg, we shrugged and wrote it off as Cito filling the air and reporters digital recorders. There's nothing particularly wrong about that in February, where everyone is still shaking off the cobwebs and getting back to work. But in April, it starts to get a little more worrisome.

The free pass that we've been giving to Cito so far has less to do with the Back-to-Back Salad Days, and more to do with our own knowledge of how uncouth our braying nincompoopery at Gibby's expense looks in retrospect. We probably did wrong by Gibby, and we don't necessarily want to make this blog an incessant screed against the manager of the day.

(But Gary Denbo, we'll never get tired of dumping on that punk.)
Posted by Tao of Stieb at 9:25 AM

You know what? Fuck Gary Denbo.

Seriously. Up his nose with a rubber hose.

As a guy who was firmly in Gibby's corner, all I have to say is...

No, seriously, if you think about it, and allow yourself to let go of reality for a moment and pretend the hitting woes were entirely the fault of Denbo....where would Gibby be right now if they simply made ol' Gary the sacrificial lamb?

But I digress....and long to embrace the new Gastonian Era. Please, Cito, give me something to embrace, like a motherfvcking PENNANT!

Sure, Cito's been saying some insane things, but until he proves otherwise he deserves the light treatment that Gibby never got. Even if you want to pretend that 1989-1993 is ancient history and shouldn't be taken into account, what should be taken into account is the 51-37 record the team had under Cito's leadership last year.

Denbo was JP's hire. Gibby didn't even know who he was. But JP talked to Jeter about what a great guy and teacher Denbo was. Fuck JP, Denbo and Jeter.

Denbo was JP's hire. Gibby didn't even know who he was. But JP talked to Jeter about what a great guy and teacher Denbo was. Fuck JP, Denbo and Jeter.

Secondly, the team performed better offensively once he took over last season.

Thrid, Cito is an HONEST TO GOODNESS EXCELLENT hitting coach.

Fourth, if we're 10 out by May 15th it won't matter if he can prove he was born in a manger and show us the gold, incense and myrrh he got as a bairn from his uncles from the Far East - the guy will be toast. Life can be a b*tch in the Bigs.

Maybe it's because no one honestly expects this team to do anything this season. Why get all bent out of shape if Cito can't distinguish Janssen from Accardo when finishing 3rd is going to be seen as a major accomplishment?

We all want PLAYOFFS! but how much confidence do we have that it'll actually happen? I just see it as a general lowered expectation on the season, not a free pass for Cito.

Why havent the Blue Jays brass done anything about adding SPEED?

Instead of signing Millar and hoping for .275 and 15 homers.

Why not pay a little more $, trade a couple of mid level prospects and get a Juan Pierre type player and add 30 bags to the mix.

did you really just write the words that Cito's and Gibbon's track records are a "wash"?

Juan Pierre? Are you out of your fucking mind? Or did you say that just to make us angry?

(This must be how Stoeten feels every day in his comments section.)

Speed wasn't the Jays' problem last year...hitting the ball hard was their problem, and Juan Pierre does not hit the ball hard.

It might be a bit of an exaggeration to say that Gibby's record versus Cito's is a wash.

But Gibby was a .500 manager in the end who never got over the hump, but never went into the tank either.

Cito had four disaster seasons in his previous run with the Jays, including one in 1994 when he had the makings of a pretty good team.

It might not be a wash (given the playoff appearances and championships), but it is not far off.

Here's an interesting question: Do you think that Terry Francona is a much better in-game manager than John Gibbons? Because we actually figure that Gibby might have won a WS if he was managing the Red Sox' talent.

We can't even tell you how much we hate Juan Pierre and everything that he represents.

Did you realize that the mighty fucking Juan Pierre and his 40 stupid stolen bases helped his Dodgers to win TWO FEWER GAMES than the Jays last year and score 14 FEWER RUNS than the offensively inept Jays of 2008?

Lucky they had him.

Whatever criticisms you might have of Cito, his comments about Clemens today have won him another year's worth of a free pass.

Calm down ladies, he said Juan Pierre "type" player, its pretty clear that just like the rest of us he wants someone who can keep pitchers honest, not the actual Pierre.

As for this whole made up "controversy", who the fuck cares? What free pass? What exactly should these magical people who are giving him a free pass be doing? Calling for his resignation? Throwing flaming bags of shit at his house?

The reason Gibby would have been lambasted for similar comments was because people had other legitimate reasons to dislike him as a manager (myself admittedly in that league, i think he was awful). Thus if he were to spout off a bunch of jibberish the reaction would be a reflection of the distaste for his performance. Cito hasn't done anything this time around results-wise that gives anyone legitimate reason to complain about his job performance.

Guess what? You don't win ball games by saying the right things in SPRING FUCKING TRAINING. If the team performs below expectation this year, you can damn well be sure that these comments and anything else Cito says this year that people took negatively will be brought up to the forefront by the naysayers. At that point they will be right to do so because his ACTIONS will not have produced the desired results.

At this point all I see is cynical contrarian dicks looking for any reason to bash Cito because he's brought a sense of optimism (deserved or not) back to the fans. And in the realm of Toronto sports the notion of optimism is viewed as indicative of some ignorant visor with which you view the world.

I generally agree with Jacks above (not about Gibby, but other stuff) -- I have noticed the aggression stepping up a tone, especially over at DJF, but I think we all feel it. The season is really close, the WBC was a disappointment in T.O., and we're all a bit antsy.
Looking forward to seeing some real baseball and discussing Cito at that point.

Good answer, Question Mark. When Cito talks the bullshit walks. Clemens = d o u c h e, and any name in MLB thats willing to say as much (ha or worse!) is A-OK with me.

Small ball sucks. Tell that to Japan and Korea idiot.

Is all forgotten now that Cito called Roger Clemens an asshole? I think we can wipe the slate clean after that one.

Gibbons has nothing other than being Ricciardi's roomate as a qualification to be an MLB manager.

Cito Dorito? Ship him back to his home country,Texas! He is a dope. The team will come in 5th and might have come in 4th if Doritohead wasn't manager. I say they will at moat 70 games. BTW, Darren priest cool new picture and a big fuck you to the guy who claims that looked like a child molester in the last picture. That turd just got caught fandling a Yankees fan! Bollocks to him, mate.