High fives all around 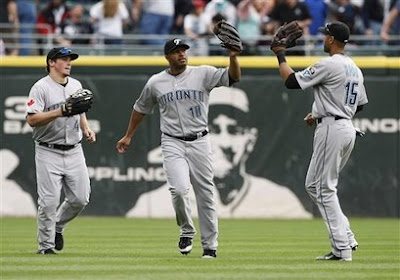 Last night, as the Red Sox were winning their tenth straight, we caught ourselves thinking about the AL East standings, and felt vaguely relieved about the fact that the Jays remain a full game ahead of Boston in spite of the Beantowners' recent surge.

Scoreboard watching, even this early in the season, is pretty awesome.

Headed into Kansas City for a four-game set with the Royals, the Jays have won all six of their series thus far. We're not sure what the rest of the season has in store, but for now, we recommend taking a moment and relishing the fact that you, my fellow Blue Jays fans, are in the midst of the best start to the season in the history of the franchise.

The baseball world is taking notice
One of the standard complaints amongst Toronto fans is that the American baseball media tends not to take notice of the Blue Jays' achievements, but that's not the case this year. The Sporting News' Richard Justice leads a column today on the next generation of baseball stars by pumping up Aaron Hill's hot start, along with the great first months of Ricky Romero and Jason Frasor.

A moment of recognition for Cito
While some of us negative nellies in the blogosphere seem ready to pounce on Cito Gaston's every misstep, here's something worth considering: USA Today points out that the Blue Jays have the best record in the Major Leagues (65-43) since Cito took over the reins of the club on June 20, 2008.

Speaking of managers...
Brace yourselves. With John Gibbons now serving as bench coach for the KC Royals, we fully expect that the next four days will be pretty much dedicated to an analysis of the whole Gibby versus Cito thing. Heck, we may even indulge.

A thought on the KC series
Not to say that the rest of the clubs that the Jays have played so far are tomato cans, but with the pitching that the Royals will send to the mound over the next four games - including Bryan Bannister, Gil Meche and Zack Greinke - this will be the first big test of the Jays' offensive mettle so far.

Jays record in their second set of ten games: 7-3

Greinke is due for a bad outing....right? RIGHT!?

We're not sure what the rest of the season has in store, but for now, we recommend taking a moment and relishing the fact that you, my fellow Blue Jays fans, are in the midst of the best start to the season in the history of the franchise.Boner.

And Greinke ain't going to know what hit him.

Oh, and I love the jump-bump that Wells, Hill and Scutaro do after every victory.

I look forward to seeing it another 81 times, at least.

Greinke isn't going to have an 0.00 ERA all year, so there's no time like the present for someone to get in there and muck it all up.

We'll send Greinke right back to the psychiatrist when we're done with him.

eyeB, I liked how Wells and Hill still did the jump-bump after the 14-0 win on Friday, but it was a subdued version. I guess they didn't want to rub it in Chicago's faces, so they only lept 2 inches in the air instead of the usual 4.

As usual Tao, a very astute entry. Your acumen for baseball analysis is admirable. Also, I agree that this series with KC will be a test.

I got written up today at work for yelling at a Redsox fan that was saying Halladay will be in Boston by July.
I can't seem to separate baseball from real life lately.

you should carry that write-up and wear it around your neck as a badge of honour, Jawn.

Kudos from the Ack.

Really? We'll take all the praise that people are willing to dish out, but we kinda farted this post out.

But we'll assume that you are talking about the entirety of our oeuvre when you refer to our admirable acumen.

Boston fans are seriously delusional if they think, after this start, that Doc is going anywhere.

Thanks for the link to the Sporting News article. A nice read.