Who is (or isn't) the lynchpin this year? 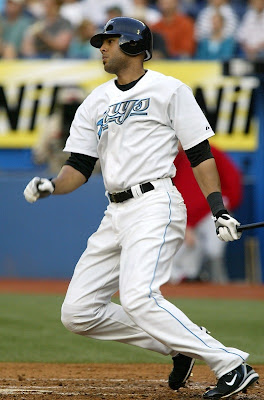 Our use of the term lynchpin in yesterday's post made us think back to a post from last year, where we asserted that Lyle Overbay's season was going to define the Jays' successes in 2008. It looks a pretty spooky in retrospect when we read this line: "If Lyle Overbay doesn't hit, we're screwed."

Not that we're passing ourselves off as Kreskin here. Now, if we had said "If Lyle hits into a million (or at least 24) double plays,we're screwed", then that would have been impressive.

We just looked back, and wouldn't you know, it was exactly one year ago that we made our bold assertion singling out the snaggle-toothed swatter of twin killing balls. So in the interest of symmetry, we're going to embark on our Second Annual January 28th Assessment of the Blue Jays' Offensive Lynchpin.

(And just for the record, you can spell it lynchpin or linchpin. We just prefer the "y". )

The Candidates Aren't: Marco Scutaro (because we doubt he plays more than 120 games this season); Rod Barajas (because he's not the kind of catcher that you depend on for offense); or Lyle Overbay (because there are no two-time winners in the Lynchpin Pageant).

The Candidates Could Be, But Likely Aren't: Travis Snider (because he's still 20 years old, and you don't depend on someone that young to carry your offense); Adam Lind (because he's going to have enough trouble keeping his head above water this year); Aaron Hill (because we're just going to go ahead and assume that his brains are still scrambled until he hits his 20th double of the season).

So, The Candidates (By Default) Are: Vernon Wells, Alex Rios, and Scott Rolen.

It might seem to be a bit of a stretch to include Rolen in this equation, except that his numbers in 25 games last September - after taking time off to get his shoulder right and adjusting his swing - were the best that we saw from the former All World third baseman. Rolen hit three homers, eight doubles, drove in 11 and slugged at a .523 clip. Accepting that 88 ABs make for a small sample size, we still think that an OPS in the mid .800's with 20 homers and 85 RsBI aren't beyond the realm of possibility. Numbers like that could really help spur the rest of the lineup.

As for Vernon Wells, we'd contend that he actually was the lynchpin last season. Playing in two-thirds of the team's games, he still managed 20 homers, 78 RsBI and an .840 OPS. But on a certain level, we wonder if looking to him as the offensive catalyst isn't a little too obvious. It would be like saying: "The Cardinals offense will do better if Albert Pujols has a good year." Well, no shit. Vernon is supposed to be the big bat for the Jays, and we don't think that's what we're talking about here.

Which leaves us with Alex Rios. In most categories, Rios slid back last year, seeing his numbers in homers, runs, hits, RsBI, on base and slugging fall behind his 2007 standards. (His numbers went up in stolen bases, but really, who gives a shit about stolen bases?) Looking forward to next season, we're hopeful that a full year under the tutelage of the Junta of Hitting (Cito, Gene Tenace and Dwayne Murphy) will result in better...er, results for Rios. Whatever the case, you can be pretty certain that Rios will spend the bulk of the season hitting in the top four spots of the order, so the Jays will absolutely be relying on him to get on and get in at a better clip than last year.

The way we figure it, the Jays will pretty much depend on a better season from Rios if they are going to have any shot at making miracles this year. So we guess that makes him the Miss Lynchpin 2009.

Either him, or Jason Lane.

I got faith in Rios. I think it's Wells. And Rolen. And Overbay.

For some reason with Cito as the captain, it's not easy to picture the team tanking again (for the first half)

Hey, if we didn't add the Manny comment, we wouldn't have received any comments on this pointless screed.

Cito is the lynchpin

fuck off tao, your very existence is pointless

Alex Rios is determined to break all our hearts. I really, really hope he takes Nick Markakis's offensive superiority to heart and attempts to beat him out in every category.

How is Scutaro going to play in less than 120 games?

If Inglett learned to play SS at his age, that would be pretty bonerific, but I doubt it's going to happen.

Scoots is going to play less than 120 games.

You don't need to know why or how.

Is that foreshadowing, Tanya Harding of Stieb?

I re-read Cito's comments about Rios' potential after reading you had named him Miss Lynchpin 2009 and it made me feel ok inside.

I'm with Tao in regards to Scutaro. My reason being that I think Johnny Mac will get some time in at short.

He might get some time, but not 42 full games.

He always finds a way.

I don't think I'm alone in thinking that he hit the ball a lot better after Cito's arrival. Though his numbers didn't greatly improve he was hitting the ball hard and having good at-bats.

This post made me look up Lynchburg, VA. How does a town in a southern state defend that name?

More male streakers will help Rios win this.
You guys have that power right?

We do have that power. Are we prepared to use it? That is the question.

Dave said:
"I don't think I'm alone in thinking that he hit the ball a lot better after Cito's arrival. Though his numbers didn't greatly improve"

Actually, he DID have better results.

Hit counting stats under Cito pro-rated to 162 games:
(parenthesis is "under Gibby" pro-rated)

I'll take that "Under Cito" version every year gratefully.

And never say a word about how many walks he draws.

I thought Mac had a hot streak until everyone realized he was trying to pull everything.

More Hardball wants to know who has the hottest fans in baseball. We'll be running a set of posts over the following weeks featuring images of each teams' hotties, with a voting poll to crown a champion. We're starting with the AL East and we'll continue through the rest of the American League, then on to the National League. Sticking true to Major League Baseball's roots, there will be an eight team playoff system where the winners of each division square off with addition of a wild card team to determine who wins the pennant and represents each league in the World Series of Hotness. Link- http://morehardball.blogspot.com/2009/01/hottest-fans-of-al-east_29.html