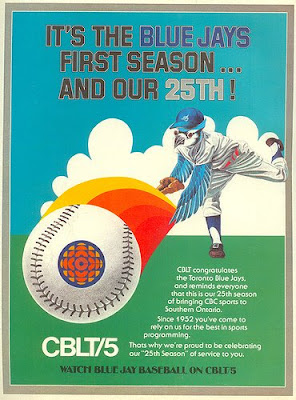 The Globe's Bill Houston reports today that the CBC is begging off of broadcasting Blue Jays games this summer, thereby robbing us of another year of incomprehensible analysis by Jesse Barfield. Shucks.

Truthfully, we doubt that we'll miss the Ceeb's coverage at all. While we thought that Jim Hughson's play-by-play was probably the best of all the TV announcers, the broadcast itself always seemed a bit flat and detached. The fact that the network's coverage of the team was sporadic throughout the season meant that there was never the sense of where that day's game fit within the season's narrative. Strangely, that never seemed to be an issue with TSN, possibly because of Pat Tabler's presence in both the TSN and Sportsnet booths.

Moreover, it seemed at times with the CBC broadcasts as though Hughson was doing the play-by-play of one game while Barfield and Rance Mulliniks were off on a tangent and watching a totally different game. Maybe things just never gelled quite right between the three of them.

For Blue Jays fans, the impact will be minimal. The team will still have 145 games televised between TSN and Sportsnet, and Rogers will likely provide the MLB Extra Innings preview broadcast for the other 17. There's also the possibility, we suppose, that the MLB Network Canada / Baseball TV will pick up some of those extra games, although with the opposition's feed. The worst case scenario is that you're left listening to the radiocast, which is probably more of a blessing than a curse.

One last thought about the CBC walking away from Jays' broadcasts: They'll come back, eventually. They always do.

UPDATED, because we were so wrapped up in aesthetics that we forgot to mention this sticky little issue: Because of the CBC pulling out, the Jays will likely take a hit to their bottom line in the neighborhood of $2.25 million. So essentially, they'll have to find someone else to cover John McDonald's salary.
Posted by Tao of Stieb at 10:20 AM

Ah, but Tao, you're ignoring the cost of the broadcast that the ball games are replacing on Sportsnet. So while they don't get that money from the CBC, they don't have to pay anything for the ... darts ... that would have been shown instead...

good call on the flat feel of the coverage....no sense of momentum with regards to the team's recent fortunes due to the game-per-week broadcast schedule. Plus, Barf called the game like it was 1985.

"Man, how those guys sittin' on meaty fastballs with a 1-1 count in the top of the 6th. You gotta be aggressive! I remember Jimy WIlliams would always tell us...."

Hughson is definitely a pro, though. (rhyme unintentional)

Another lost revenue stream? Whatta joke. This 2009 season is becoming more and more tragic all the time. What could happen next? Jp being fired? God people would be so pissed at that possibility.......

I think the reason for the randomness of the Barfield/Mulliniks commentary is that they are actually from different planets...

I really just want something cool to happen...a significant signing, a firing, a something....

tell me about it. Windchill temps hit -51 here yesterday. Throw me a fucking bone, Blue Jays. I need something to get me through January.

As I mentioned on the drunks site, I'm excited about this. CITY-TV better pick up these games, man! I want some more Alex Rios stalking.

That bird pitcher is dope!
-brent in Korea

Ack, it's going to be plus 1 on Monday. I'm hitting the beach.