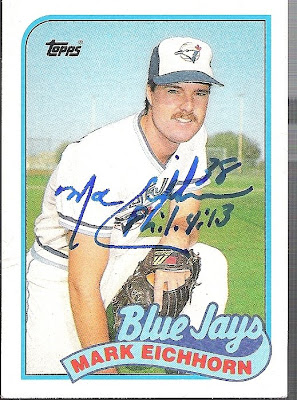 Somewhere in between the players who have their names plastered across honoured on the facing of the Rogers Centre and those who receive our own ignominious honour, there are those in Blue Jays history who have stepped up and left their mark, even if their moment in the sun was all too brief.

On that level, there are few Blue Jays who left more of an impression on us than Mark Eichhorn.

(And kudos Sven, who in the comments of our Kent Tekulve post a couple of weeks back correctly divined that we were a rabid Eichhorn fan.)

Eichhorn's career with the Jays started with a whimper, when he went 0-3 with a 5.45 ERA in seven starts with the team in 1982. After a few more years of scuffling around the Jays' farm system, Eichhorn rejigged his throwing motion from the standard overhand into the glorious pseudo-submarine, sling-it-hop-and-fall-off-the-mound delivery.

It really was a thing of beauty.

And while the delivery may have owed something to some of the submariners of the past (Tekulve and Dan Quisenberry, for instance), Eichhorn's motion was far less jerky and far more graceful than those. For a low-angle sidearm slinger, it looked pretty smooth, and it allowed Eichhorn to throw a slider that fell as suddenly and dramatically as the value of our mutual funds.

Aside from mere aesthetics, Eichhorn's 1986 rookie season with the Jays stands out as one of the most remarkable performances from any Toronto pitcher: 69 games, 157 innings, a 14-6 record with 10 saves, 166 strikeouts versus 45 walks, a 1.72 ERA and a .955 WHIP. And even though we think that the BBWAA is a bit of a joke, it's still worth mentioning that Eichhorn finished sixth in the Cy young voting (although we're assuming those were hometown votes), and third in the rookie of the year voting.

There's also this story about that 1986 season that makes us think that Eichhorn was pretty freakin' rad: Apparently, the Jays offered Eichhorn the possibility of starting one of the last few games of the season so that he could rack up enough innings to qualify for the ERA title, but the pitcher turned the idea down because he didn't want anyone to think he was sneaking in the backdoor to get it. That's nails.

(And as it turned out, he ended up throwing 4.1 innings on the last day of the year, pitching in both ends of a double-header against the Brewers. Double nails.)

Eichhorn pitched for two more seasons in that first stint with the Jays, with diminishing returns as runners began taking advantage of his deliberate motion to the plate. His 1988 season was punctuated by an ongoing attempt to speed up his delivery and improve his pick off move. Jimy Williams, as he is wont to do with everything beautiful and true in baseball, tried to make Eichhorn conform to his rigid and dull approach to the game.

It damn near killed us to watch it. It was like having two seasons of Hunky Dory and Ziggy Stardust, and then seeing him crushed down into Never Let Me Down.

Eichhorn was banished to Atlanta (where he kinda sucked) and spent some time with the California Angels of California, where he regained his form (posting a 1.98 ERA and .931 WHIP in 1991.)

In 1992, the Jays summoned him back to his home and rightful place, just in time for their back-to-back World Series runs. Over those two postseasons, Eichhorn tossed 4.1 innings of runless ball, and while he wasn't the bullpen lynchpin that he had previously been, he was still an effective relief arm, holding the lead and feeding the ball to Duane Ward on many nights.

Though he finished his career elsewhere (stints with Baltimore and back to Cali), we still can't picture him in any uniform other than the Jays'.

All of this adds up to Mark Eichhorn being a truly Greatish Jay. And besides all of this history and statistical nonsense: Isn't it wicked fun to say "Eichhorn"?
Posted by Tao of Stieb at 9:48 AM

Ward and him must still kick it:

I'm no Bowie expert, but I kinda liked the single "Never Let Me Down."

Nevertheless, the analogy is apt.

So is Henke great or just greatish? I just purchased a retro Jays cap (had to order it special on account of my Menchish head size. Now if I can find my junior high glasses, I can go as Henke next Halloween.

Rookie year with Jose Canseco, Wally Joyner, Cory Snider, Danny Tartabull, Pete Incaviglia (sp?) ... probably among the most stacked years of rookies imaginable. Plenty of guys with 20+ Hr, a few with 30, and 80-100 RsBI (Canseco was just under 120). Hard to believe stats like Eichhorn's leave him at third on the rookie list till you recap the young talent of that season.
Good call on the memories, Tao.

That was a pretty stellar rookie crop, but then again, Eichhorn had a pretty amazing rookie year.

And Danny Tartabull was the name that stuck out to us...remember when he was the Yankees big signing? We wonder if people will one day feel the way about A.J. Burnett as they do about Tartabull.

At least Tartabull made an appearance on a Seinfeld episode. I have a feeling A.J. won't get the same opportunity. Although, I'm sure if Pete Puma was given the chance to trade barbs with George Costanza, hilarity would ensue.

Phil 4:13 "I can do everything through him who gives me strength."

Finkel is Eichhorn. Eichhorn is Finkel.

Thanks for the kudos, I'll take them any time.

Watching Eichorn made me try to be a side-armer in baseball which pretty much destroyed my throwing arm and motion for about ten years.

Oh my god, there's so much worthwhile information here!