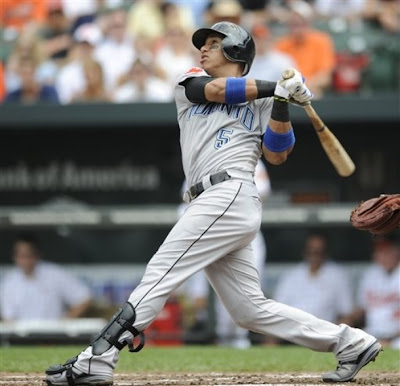 It didn't take long for us to get over the loss of Alex Gonzalez. (And who is this Marco Scutaro that you speak of?)

After less than a week on the roster and just three games, we've all pretty much fallen ballcap over ballsack for Yunel Escobar. The combination of the novelty of the new player with a pretty swell series (albeit, against the sad sack Orioles) means that the trade to Escobar has met with almost universal approval by now.

(And for those of you wondering based on the litany of frantic tweets on the subject last week: Yes, we fully approve of the choice of 5 as his jersey number.)

It's early yet, and there is still plenty of time for Blue Jays fans to turn on the young Cuban at the first sign that he's putting in less effort and intensity in running out ground balls, or if a throw to first is unleashed with something less than Ecksteinian zeal. For a town that used to have seemingly endless supplies of love for latin players, Toronto now seems to be overly enamored with the sort of truculent hustle and grit that they can find from any Gord or Dougie down at Christie Pits.

There's lots to like from what we've seen so far of Yunel, and we're jazzed that Alex Anthopoulos was able to bring in a long-term asset with such a high ceiling in exchange for ten more weeks of Alex Gonzalez's dream season. Not a bad haul at all.

The pronunciation thing
In the three or four years since we first heard of him, we'd always heard Escobar's name pronounced "Youn-Yell" or "You-Nell". We can't remember what they called him on the TBS broadcasts, but it was certainly something along those lines.

So we were a little taken aback when we first heard Alan Ashby drop a "June-Yell" on the air this weekend. For a second, we thought he was affecting some sort of Esai-Morales-in-Bad-Boys character, until he went on to point out that this was the correct pronunciation of the name.

We're not sure what to make of this, because there is a part of us that wants to point to this as another indication of how the kids waydownsouth in Atlanta never even tried to get this guy. On the other hand, we worry that we're doing that thing of wanting to be way too authentic, rolling our R's and turning Z's into TH's and what not when we end up looking like someone's drunk aunt singing along to the Gypsy Kings. Such a quandry.

Should we just accept the Anglicized version? Do we follow along with the June-Yell crowd? Does it even matter, seeing as how you never hear us speak?
Posted by Tao of Stieb at 10:12 AM

I say go with "you-nell". I still call Jose "baw-tista" just because it sounds better that way.

At one point many years ago, some announcers were pronouncing Ozzie Guillen's last name like "gee-JENN". Maybe it's because of different Spanish dialects?

It's a slippery slope when you start pronouncing certain names with that kind of authenticity, because then you sound weird if you don't do the same for everyone, and that doesn't necessarily always work out. The way I say "Encarnacion" or "Hechavarria" is likely WAY different from the way those guys pronounce their own names, but I'm okay with that.

If I was speaking to Mr. Escobar, I certainly wouldn't expect him to pronounce my name with a fake American accent, y'know?

So the Jays should have kept Rios?

(I always write "we should have..." but then I remember umbrage is taken when a lowly fan uses that particular possessive pronoun. Looking forward to yelling, "They made the post-season. Yes, they did!" sometime before my pubes turn grey.)

Maybe Torontonians only like Cubans now. I sure hope you have a couple more Escobar posts in you for the rest of the week!

My employers informed me its "Joo-Nell".

I know this because I wanted to put "Yu-Jays" in headlines, but they said it would be "Jew Jays" and that's apparently possibly offensive.