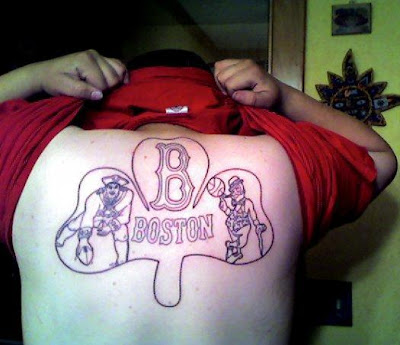 We'll confess that, as the year has progressed, we've lost a bit of the spring in our step. Sliding back into fourth place and double-digits in games behind the leader will make your swagger look like a stutter.

So all we can say is: Thank goodness for the Red Sox. Because we woke up this morning wanting to punch a Sully or an O'Douchehole right in the face. We've even invited our Red Sox Nation pal over to Stately Tao Manor tonight so that we can listen to his excuses about this injury or that ouchy as the Jays mash Jon Lester's junkballs into orbit.

And with the slew of injuries that have karmically befallen the Red Sox, we've got a whole new crew of reprehensible tools to hate on this weekend: Felix Doubront? Hate 'im. Eric Patterson? Loathe that guy. Daniel Nava? He sucks, and that Selena movie sucks too.

(And by the way, Sox fans: What ever happened to all of those untouchable prospects that have been languishing for a good half-decade in your system? Isn't Lars Andersen supposed to be winning MVPs by now?)

See how fun this is? We can't wait to see the barely literate scrawlings that come seeping out of the Sons of Sam Horn this weekend, if only because they'll remind us of how much we want to see the Sox crumble under the weight of their own crapulence.

The Sox have lost four straight coming in...We'd love nothing better than to see the good and noble sons of Toronto send them home for the All Star break in a full on death spin.
Posted by Tao of Stieb at 1:50 PM

Ah...the One-Sentence Post. A handy arrow to have in your quiver.

No rock out? Come ONNN!

Sweeping the Red Sox this weekend would be the greatest gift the Jays could give us right now -- head into the All-Star Break on a nice little 5-game winning streak, make up some serious ground in the season series vs. Boston, and carry a bit of momentum into the suddenly favourable schedule that awaits following the break (Baltimore, KC, Detroit, Baltimore, Cleveland). If the Jays play their cards right they could be right back in this thing by the time August rolls around.

In the more immediate future, let's kick the shit out of Jon Lester. The other two pitchers the Jays will see this weekend are Lackey and Dice-K -- coincidentally, both are total pieces of shit -- so it'd be awesome to get a big win against the only decent Boston pitcher we'll see.

And would you look at that: tonight Buck is catching, and Molina is the DH.

Ty, I love the way you think.

This Masshole makes no excuses! See you soon.

A masshole has apparently infiltrated the comments section. Is nothing sacred anymore?

I do proclaim this game a Blairsian pig...

Yeah, not quite the game that we were hoping for. 3rd bad start in a row for RR. Was supposed to be at this game, thank god I am not there to have to deal with the Massholes that show up.

Tomorrow, B. Morrow, we'll love ya, B. Morrow. You're only a day away.

Goodness, there is a lot of worthwhile info in this post!