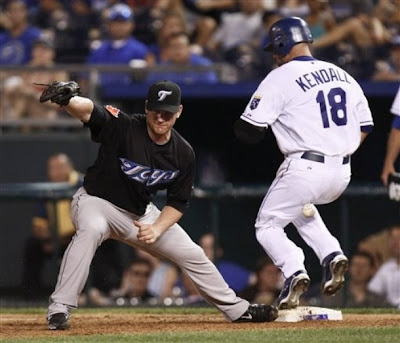 If your whole thing this morning is something like: "Kevin Gregg sucks and shouldn't be the closer", here's what we're gonna tell you: There's more than enough blame to go around for last night's loss.

And if you're going to whine and cry about how the bullpen gave up the game in which Brett Cecil pitched so heroically, know this: Any other team would have taken all that junk that he was leaving up in the zone and parked it in the heliosphere.

The Jays ran the bases like nimrods last night (looking your way, Mr. Lind), flailed at the plate when there were runners begging to be driven in, and made their pitchers get too many extra outs.

It was a game that appeared to be in the bag twice over, and one that we felt they should have walked away with. To see it slip away twice to a bunch of slap-hitting cellar-dwellers might have made it to most painful loss of the season so far.

And as for our jar-headed friend
Kevin Gregg went out and threw strikes. And some of them got hit. That's going to happen.
Posted by Tao of Stieb at 10:17 AM

Agreed, except for the Gregg defense; if he had thrown strikes (or, heck, even ONE strike) to Jose Guillen then the game could easily have been over. It might not have, but a four-pitch walk in that situation doesn't look good.

Three walks, one strikeout for Cecil. Not. Good.

I actually couldn't believe how many hanging breaking balls the Royals hitters just stood there and watched. It's like they just don't want extra bases.

The Royals are scrappy gamers. If they can't beat it into the ground and run it out for an infield hit, they aren't swinging.

Fair enough about Guillen, although if there were one guy in that lineup that I'd be throwing around, it would be him.

Maybe I'm trying to hard to make excuses for Gregg. I guess that even if I have warmed up to Shawn Camp, I don't like him as the closer.

"Any other team would have taken all that junk that he was leaving up in the zone and parked it in the heliosphere."

But the Royals lead the league in batting average!!1

I don't blame Gregg for the loss, it was definitely a team effort.

However I will not say that Gregg pitched well. He sucks ass.

I'm sorry but isn't this the Kevin Gregg we knew we umm... they were getting? Decent enough but with occasional lapses?

And I'm with Tao on Camp...there's something about him that just doesn't say closer.

Lind made some terrible swings at pitches that were up and outside. The first time, I figured the hit and run must have been on. The second time, I guess he can't resist that outside pitch at the shoulders.

It would be nice to have a reliable stopper though. Then again, anyone could give up a triple to Podsednick in that park. Once he did that, the writing was on the wall.

That's your insight on the game from a fat guy who can barely get a single in lob pitch.

If he were Snider, people would be calling for him to get sent down.

I understand the desire to have a big time stopper in the bullpen, but let's keep in mind that this is the thinking that led to the Jays pouring big money into B.J. Ryan. (And how did you all like how that turned out?)

Why does the boxscore show that Gregg threw 9 strikes and 12 balls? I think he was behind 1-0 on everyone. And yet in his interview he said he made his pitches and got beat. Huh. I guess he has no intention of throwing in the strike zone.

I wonder if Gregg is back in with a save situation tonight?

I say, Cito should keep running him out there. If he does well, he is a better chip. If he sucks then he can't say much.

I'm not ready to give up on the season, but I would think Gregg is among those who will be moved. Anxiously awaiting AA's next move.

As for BJ Ryan, yeah that didn't turn out well in the end, but I loved that first season. Dominant closers who enter to sinister theme songs make my nipples point to the heavens. Confused K victims walking back to the dugout shaking their heads are the lamentations of the wicked. Ask not for whom the bell tolls...and so forth.

Would you believe I haven't even started drinking yet?

Whoever told Lind to forget what he was doing last year and just focus on pulling the ball needs to be maple syrup'd and feathered. He's totally useless against lefties and any ball on the outer half. It's pathetic and sad.

Lind needs a couple of weeks in the minors to remember what it was like to hit a ball hard. Gawd he's been awful. Doesn't have a clue anymore. Completely unexpected. We may have another Hinske on our hands.